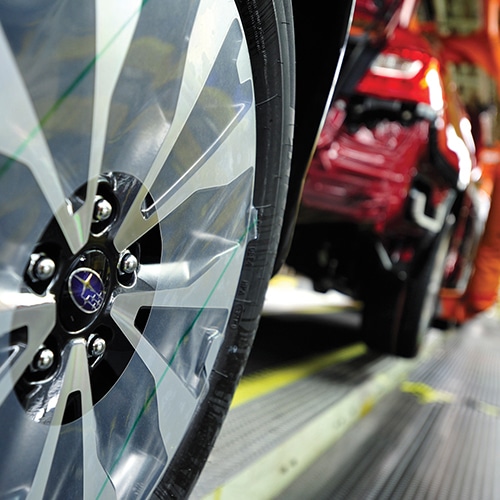 It was back in December of 1986 when executives from Subaru (Fuji Heavy Industries) decided to, via a joint venture with Isuzu at the time, cross the Pacific and begin manufacturing in the United States. What was initially considered a leap of faith—Subaru had previously opted to do all of its vehicle production in Japan—turned out to be a great decision by the company, as 29 years later it has only grown its presence in the U.S., expanding its plant in Lafayette, Ind., a number of times (including a $400 million expansion begun in 2013) and steadily increasing production to the point that the company was able to produce over 300,000 vehicles in 2015.

In 2015, the company maintained and built upon this long-spanning narrative of success, opting to invest an additional $140 million into its Indiana facility, a move that will grow their workforce by 1,200 workers by 2017 and increase production capacity by 100,000 vehicles per year. “In 2015, we saw sales of Subaru vehicles in the U.S. hit an all-time record of 582,675 units,” says Easterday. “As Subaru sales have grown, so has SIA, and the decision to grow Subaru’s presence even more within Indiana is truly a show of strong confidence by our parent company in the associates working here, the surrounding community, and the state as a whole.”

With respect to its production activity, SIA currently manufactures the Subaru Legacy, Outback, and the Toyota Camry, and Easterday says that in November, they will be adding the Subaru Impreza to its lines as well. “We have continued to speed up our lines, produce more, and build the type of Subaru vehicles that are in most demand here in the U.S.,” he says, noting that in 2018 they will also be “manufacturing an entirely new three-row, crossover SUV that Subaru has yet to unveil to the market.”

Leading the Way
Taking a closer look into Subaru’s production presence here, there are many aspects of the company deserving of praise, but perhaps most impressive is the leadership role it has always taken with respect to environmental stewardship and worker safety in the United States’s auto industry.

One of Subaru’s guiding corporate mottos can be found in their statement: “Sustainability is operating in a way that meets our current needs without compromising the needs of the future.” Easterday agrees, saying it has long been a part of Subaru’s philosophy to serve as leaders in environmental stewardship. “When we talk about environmental stewardship, it goes way beyond just recycling,” he says, adding, “It’s truly a way of life here at SIA, and each of our associates—be they officers or production associates on the plant floor—are dedicated to finding new and innovative ways to become better stewards in the surrounding environment.” And the company’s track record certainly reflects it.

But perhaps equally impressive to the company’s pursuits towards green greatness is their everlasting commitment to safety in the workplace. “Our associates are our greatest assets, and we work to maintain and provide the safest work environment while building the safest vehicles on the road.” Speaking particularly towards OSHA incident reports, Easterday says that the U.S. manufacturing’s average rating is 4.0, with the auto industry itself totaling 7.3 in 2014. With Subaru, however, the company has achieved a score of under 1.0 for each of the past four years.

When you look at these areas of the company—environmental stewardship and safety—and add on the fact that Subaru is able to achieve a high degree of logistical efficiency due to the fact that over half of their supply chain resides in Michigan, Ohio, Kentucky, and Indiana, it becomes clear why Subaru’s success has been consistently growing over the years, and why this expansion was ultimately necessary.

Developing a Future
Furthermore, to be able to add 1,200 jobs over two years in a time when manufacturing in the United States is threatened more than ever by a growing skills gap in its workforce, is a feat that shouldn’t go unnoticed, as it shows yet another innovative side of the company in its efforts to be an agent of change in the automotive industry.

“The state of Indiana has a rich manufacturing heritage, so there is already a strong population to pull skilled, new associates from,” says Easterday, adding, “However, with an expansion the size of this and its reflection of our desire to manufacture in this state for the long term, we certainly recognize the need to develop and foster the younger generation’s interest in manufacturing, and SIA has taken an active role in these efforts in recent years.”

He says that one example of this is through Subaru’s advanced internship in manufacturing program, which they offer in collaboration with nearby Purdue University and Vincennes University. Under this program, students coming out of high school are able to spend time within SIA’s facilities working alongside the company’s employees for two days a week, while spending the other three days taking classes. “Purdue actually maintains a branch campus here on site of the Purdue Polytechnic Institute, so students can easily go back and forth throughout the week.”

Students enrolled in this program are then able to graduate after two years with an associate’s degree, and have the opportunity to immediately join either SIA in its maintenance section, or other local manufacturers who contribute to the program as well. “It’s a great opportunity for us to help change the younger generation’s perception of modern manufacturing, while also helping ourselves continue to grow by training and developing our future workforce.”

It’s efforts like these why the company has garnered a number of awards tied to such in the past year, including a 2015 Secretary of Defense Employer Support Freedom Award, and a 2015 WorkOne Achievement Award from the Indiana Department of Workforce Development.

Subaru’s ability to innovate on both an internal and external level makes it clear why the company is so successful in North America’s highly competitive automotive market. “We try to take a comprehensive approach to any decision we make, considering not only the quality and reliability of our products, but what the safety and environmental impacts of our operations are as well,” he says, adding, “We believe this approach is one of the primary reasons we have been able to be so successful in the North American market, and will continue to be well into the future.” Looking at SIA’s expanding facility in Lafayette, the quality of workers working within it, and the company’s responsible approach toward its surrounding community, it’s hard not to agree with his words.