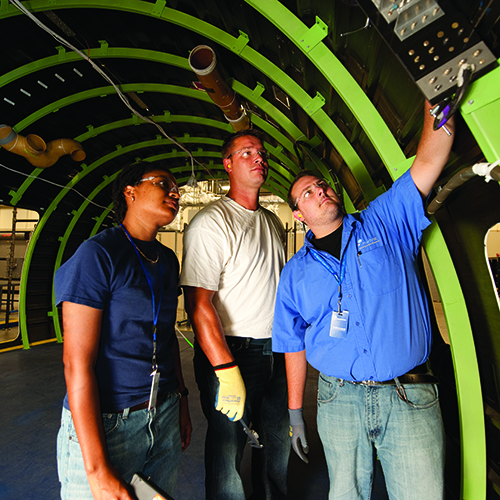 In 2016 it’s no different, although the state’s production environment has shifted from one based primarily upon the leaf and cloth to a much more diversified economy—with some of the world’s most prominent automotive, aerospace, machinery, and energy companies (and many more) operating in and around the state. And in building off of and evolving its past, the state is quickly setting itself up as one of the nation’s leading economic innovators of the future.

South Carolina’s undergone a transformation into a versatile industrial powerhouse over the years, a shift fueled by a strong manufacturing sector, and we continue to expand our reach in both the domestic and international markets as companies of all sizes choose to establish, relocate, or expand their businesses to and within our state,” says Bobby Hitt, South Carolina’s Secretary of Commerce.

Pointing to companies like Michelin (40+ years), Fujifilm (20+ years), BMW (20+years), and Bridgestone (15+years), Hitt says these examples of corporate longevity speak to the fact that when companies from near and far come into South Carolina to do business, they rarely want to leave. “We have seen an evolution throughout the years of our state’s industrial logistics, whether it be through investments made into enhancing our port, rail, and terminal facilities or the enacting of business-friendly legislative measures, and the end result is a state that is highly interconnected in its activity,” he says, adding, “Today, the state of South Carolina is an intelligently-run environment based upon problem mitigation and performance efficiency for our businesses, and many of them as you can see have been able to thrive for a very long time because of such.”

A World of Exports
One of the state’s biggest economic strengths is its ability to export to nearly anywhere around the world. In fact, South Carolina exports totaled nearly $30 billion in 2014—a 13.1 percent increase from 2013—with goods and products produced in the state going everywhere from China, Japan and South Korea, to Germany, Canada, and Australia.

Given this presence, the state’s Department of Commerce operates satellite offices in Europe and Asia in order to better recruit and assist companies from these areas in establishing, relocating, or expanding their operations to the U.S. “We have had an office in Germany since the mid 70s, and in 2005 opened up an office in Shanghai to more effectively manage the increasingly larger investments coming out of Asia over the last couple of decades,” says Hitt.

This proactive focus has led to the state being first in the nation in foreign direct investment per capita and 4th when looking at total foreign direct investment, a position that is pretty impressive when you consider the state’s somewhat small population of 4.4. million individuals. “For three out of the last four years our state has topped $5 billion in foreign direct investment, with companies like Mercedes Benz, BMW, Toray, Volvo, and GITI coming in and setting up significant operations across our state,” he says, adding, “and I think that says a lot about the business environment we have cultivated over the years, because these are the kinds of companies that could have gone anywhere, but they chose us.”

The state’s heavy presence in international markets prompted the S.C. Department of Commerce to establish a brand new International Strategy and Trade Division in December. Working to develop an even more coordinated and strategic plan across South Carolina’s international company recruitment and export efforts, the division will be tasked with strengthening relationships overseas, expanding global connectivity, and creating new trade opportunities for the state’s existing and prospective businesses. “We believe that now is the time to build on our recent success abroad, and to not only continue solidifying ties with important international companies, but to also evaluate the state’s existing and future trade agreements,” says Hitt.

Leveraging the Locals
But for Hitt, a lifelong resident of South Carolina and manufacturing veteran who worked at BMW’s Spartanburg plant for nearly 20 years prior to taking up his current position as Secretary of Commerce, it’s not just about focusing outwardly on the opportunities that lie outside of the state, but also growing and taking advantage of the enormous potential that lies within it as well.

“South Carolina has 46 counties, but about half of our population live in only 9 of them,” he says, adding, “So we have worked hard to promote rural economic development in these other areas by bringing in small and mid-size companies to promote a more proportionate level of job growth in these areas.” And they have been successful so far, with one of three jobs recruited in South Carolina going to rural counties in 2015, an increase from the reported one in four that occurred in 2014.

The state also has set up nearly three-dozen innovation programs over the last two years, particularly aimed towards assisting the state’s burgeoning manufacturing sector, which has in turn led to significant investments from some of the world’s most renowned companies. For example, Boeing, who initially came to South Carolina in 2004, has since expanded numerous times and shifted major production operations into the state, including final assembly of its 787 Dreamliner aircraft.

“When companies like Boeing, along with automotive giants like BMW, Mercedes, and Volvo continuously reinvest into their operations here, it sends a strong message about the skill and overall competency of South Carolina’s manufacturing workforce,” says Hitt. And it shows in the numbers, as the state is one of the leaders in the Southeastern region of the United States in manufacturing employment growth over the last four and a half years, growing by 10.6 percent since 2011.

Preparing for the Future
It’s a position of strength for the state, but Hitt and his colleagues know that in order to continue to grow this sector, they—like just about every other state in the U.S.—need to ensure that they have a future workforce ready to step in and carry the torch when the time comes.

“The future of our manufacturing workforce is very important to our state and it’s continued success, and as we start to see a generational shift in our workforce, South Carolina has aggressively set up programs to ensure that our future is just as bright as our past and present have been.”

One of these moves was the creation of an apprenticeship program that initially began in Spartanburg, but has since grown to become a statewide effort. “This program involves recruiting and paying young people between the ages of 18 and 25 to come work inside a manufacturer’s facilities, and gain the experience they need in order to succeed in today’s advanced, complex manufacturing environment.”

Hitt says that these individuals typically work 20 hours a week inside a company’s facility, and then attend classes at a local technical college as well, ensuring that they are receiving both the education and hands-on experience that the world-renowned companies operating across the state demand. Strengthening this effort is the fact that a couple years ago South Carolina’s legislative body created a liaison program between its educational institutions and the Department of Commerce, where there are now 12 field agents around the state responsible for facilitating a greater level of communication between businesses in need of skilled laborers and the schools training them.

“What we’ve found is that everyone has different expectations, but increased communication between these private and public entities has brought us closer to developing a system that gets everyone onto the same page,” he says, adding, “And with our apprenticeship program now having grown to over 3,000 students and nearly 450 companies, I can say that we are well on our way to achieving such.”

It’s this kind of proactive, all-hands-on deck mentality that has been necessary in any state’s success in today’s world. And with its “inside-out” focus, South Carolina has taken this effort to another level, putting itself on a path to continued prosperity, and its balanced approach figures to serve as one of the nation’s leading models of success going forward.

ABOUT ROBERT M. HITT III, SECRETARY OF COMMERCE:
Robert “Bobby” M. Hitt III was appointed by Governor Nikki Haley to serve as Secretary of Commerce in January 2011. Hitt, the previous manager of corporate affairs at the BMW Manufacturing Company in Spartanburg, brings a wealth of economic development experience to the Department of Commerce and has personally worked with the previous five commerce secretaries.

He is the past chairman of the S.C. Manufacturers’ Alliance, has served on the executive committees of Advance SC and the Upstate Alliance and on the boards of St. Francis Hospital System and Hollings Cancer Center at MUSC.

Hitt is a native of Charleston and graduate of the University of South Carolina. USC recognized him as Distinguished Journalism Alumni of the Year in 2001. In 1987, he received the prestigious Nieman Fellowship for journalists, which allowed him to study for a year at Harvard University where he focused on management and law. He and his wife Gwen have two sons, Lucas, and Robert Paul and one grandson, Ben.