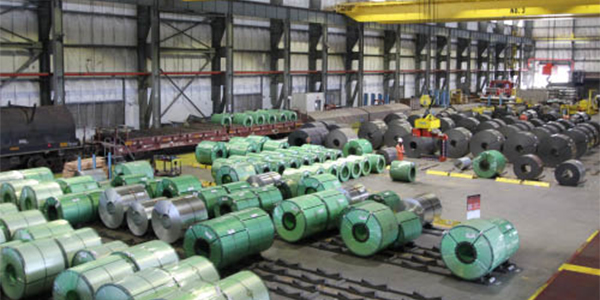 Steelscape is changing the landscape in Shreveport, La. In the midst of a project to relocate its 300,000-ton-per-year galvanizing line and 150,000-ton-per-year paint line from Richmond, Calif., the company has increased its capacity while fine-tuning its capabilities to provide better alignment between supply to market and customer demand.

By relocating its metallic-coating and paint lines, the company has infused the area with more jobs and has helped to boost the economy with a dynamic operation that provides steel to necessary construction projects throughout the U.S. market.

The only coil coated-steel producer in the western United States, Steelscape can process the raw material (hot band coil) – from pickling to painting – in its own facilities. Its new state-of-the-art, 700,000-square-foot plant will act to enhance these capabilities, enabling Steelscape to provide superior customer service, shorter lead times and more reliable delivery performance to customers located in the Midwest and Eastern markets. It will also allow Steelscape to better focus its West Coast locations (Kalama, Wash., and Rancho Cucamonga, Calif.) on customers located in the Western U.S. region.

Steelscape entered the market in 1991 with its paint line in Rancho Cucamonga, and began manufacturing Z-NAL™ steel there in 1995. In 1997, the company opened its newly built coil-coating plant and corporate headquarters in Kalama. This facility produces TruZinc® steel. In 2002 an additional facility in Richmond, was acquired, which greatly expands its coil coating capabilities. (After analyzing its pre-painting capacity in the United States, the company decided to relocate its processing equipment housed in Richmond to Shreveport rather than purchasing all brand new line equipment.) With this strategy in mind Steelscape has now successfully repositioned its finishing production capabilities to accommodate the south west/east market demand.

The company is a subsidiary of IMSA Acero, the leading supplier of metallic-coated steel in Mexico producing 1.4 million metric tons annually. IMSA Acero, part of the Grupo IMSA family of companies, exports to more than 30 countries and operates production facilities in Monterrey and Monclova, Mexico.

Centrally located
Steelscape chose Shreveport because its south central location places it in the heart of its targeted marketplace and would make its operations more efficient and less expensive. The location near three rail lines, waterway access to the Gulf of Mexico, an ample labor supply and competitive energy costs makes the site very attractive, according to the firm.

The move will cost the company $80 million. A third phase of the consolidation and expansion effort will cost $120 million and include the addition of a cold-rolling steel mill, a pickling line and a second metal coating line. Upon completion, the plant, set on 75 acres, will measure 700,000 square feet under roof at a cost of roughly $200 million and employ 240 people.

“Shreveport is being constructed in four phases,” notes Randy Strikwerda, Project Manager in Shreveport. The first phase, he explains, involves the coil coating of metallic coated flat roll, which is already up and running. This line will eventually produce 200,000 tons a year; now in production ramp up, it is producing 10,000 tons a month. He adds, “What makes us distinctive is that no one else provides a flat rolled coil coated (painted) product; others do this through metallic coating and then farm the piece out to paint. We circumvent a lot of delay.”

The second phase, the metallic coating line, will go into production in late November, 2006. The third phase involves cold mill and coil pickling and the fourth would be the addition of a second metallic coating line (the third and fourth phases are still on the drawing board).

“Our approach is to construct the plant from the greatest value added end, which is why we began with the painted product for the construction industry; then we’ll backward integrate,” Strikwerda explains. “We begin with the product that’s most important to the customer. We’ll have a half-million square feet under roof through sequence three.”

Many contractors have been involved in the project, including Siemens VAI, which received a contract for providing process equipment. Equipment to be supplied includes a welder, cleaning section, entry accumulator, dual-pot coating system, dynamic air knives, surface-conditioning mill, tension leveler, roll coaters, a strip transport system and all-electrical and automation systems. The project design engineer, Aillet, Fenner, Jolly and McClelland located in Shreveport, have been involved with foundation design, civil, structural, electrical, and mechanical engineering and land surveying. Wieland-Davco, the general contractor for the Steelscape Project, is headquartered in Lansing, Mich.

The company’s facilities are also equipped with state-of-the-art testing equipment. Each coil is monitored and tested during every stage of the coating process. Once the order has been shipped, Steelscape provides sound advice and flexible service, with facilities strategically located near the three major modes of shipment – ship, truck and rail – to ensure that all destinations can be served promptly and efficiently.

Another big move occurred for the company in 2004 when it purchased the assets of the Polymer Coil Coaters facility in Fairfield, Ala. The acquisition was finalized at year-end, with Steelscape taking full ownership. Polymer’s coil coating line can process 150,000 tons annually of galvanized steel, cold-rolled steel, and Galvalume coil. By acquiring Polymer, Steelscape adds an additional paint line with speeds of 300 feet per minute, a slitter, an embosser, additional storage capacity and an “in-market” location to better serve the Eastern United States.

At the time of the acquisition, Steelscape president Miguel Alvarez had said, “This acquisition is allowing our company to have geographical presence in the Eastern part of the country, which is an important step toward becoming the leader in pre-painted products for the construction industry in the United States.”

Supreme products
In addition to state-of-the-art capabilities, the company has established itself as a leader with products such as Z-NAL steel, a metallic-coated sheet steel offering two to four times the corrosion resistance of galvanized steel. Research has demonstrated that a coating consisting of 55 percent aluminum, 43.4 percent zinc and 1.6 percent silicon by weight provides the most effective corrosion protection for hot-dipped products. Z-NAL has a uniformed spangled surface and can be readily bent, rollformed and drawn. Durability, edge protection and resistance to crevice corrosion have made this product the fastest growing steel product on the world market.

When customers request galvanized steel to complement Steelscape’s Z-NAL™ the solution is Steelscape’s galvanized sheet steel, TruZinc®. Because it is offered with a broad range of customer options, the applications for this steel are virtually unlimited.

A clear, odorless resin coating can be applied in-line to TruZinc to produce TruZinc® Plus steel. The thin acrylic coating applied to both sides provides a beautiful satin-smooth finish that eliminates the need for lubricants, allows easy field painting, and protects the steel during storage and installation.

Such products have enabled the company to post significant gains and through the opening of its plant in Shreveport, its business has gained further momentum as it strives to further its position as a high-end, quality supplier. “Our quality must be premier; we place a high value on customer service, with short lead times, on time delivery and competitive pricing,” Strikwerda says. “Internally we provide resources and expertise to help customize manufacturing and make the process more efficient, such as Six Sigma and KT processes.”

He adds, “What drives our business is customer service, we pride ourselves on giving on time delivery and engage our entire organization in achieving this value.”