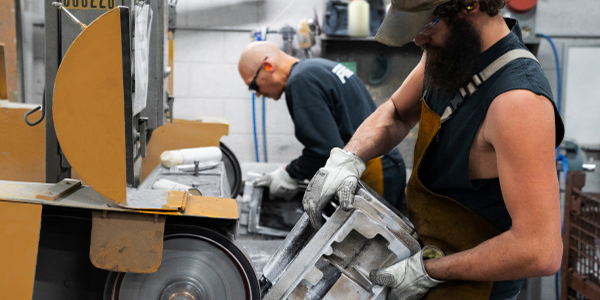 It can’t afford to. Facing a glut of foreign competition, with Asia on one side and pricing pressures from customers on the other, Wisconsin Aluminum Foundry must constantly increase productivity, reduce cost, and modernize its plant – or face extinction.

In recent years, the company – which is based in Manitowoc, Wis. – has invested $1 million to $2 million annually in high-tech improvements for its facility. The latest is a thermal sand reclamation system that will allow Wisconsin Aluminum Foundry to reuse much of the sand that it now uses in its core-making processes. The system will reduce the need to purchase virgin sand, as well as eliminate sand waste hauling and landfill disposal costs. This system also generates a higher quality sand. Company officials predict the capital investment in this system will be recouped in about 24 months.

Kory Brockman, vice president of finance for Wisconsin Aluminum Foundry, said that, in the current marketplace, “cost is king, and if the cost of your product is high, you’ve got to remove cost, eliminate waste from your processes, make the casting faster – I know it’s a cliché, but time is money. In the end, when you still produce a quality casting, you’ll have a better chance of survival.”

Automotive pioneer
Survival is something that Wisconsin Aluminum Foundry – which watched some of its competitors fall by the wayside in recent years – does very well. The company was founded back in 1909 by Abraham Schwartz, a Russian immigrant and scrap metal collector who started a small brass and aluminum foundry that year with just 10 employees.

Some of the earliest castings produced were parts for the Kissel automobile, which was manufactured in Hartford, Wis. in the 1920s. The Kissel car was the first to use cast aluminum cylinder heads and crank cases. By 1930, the company was also moving into consumer products, introducing the All American Pressure Cooker, which the company still produces today. Other products included can sealers and aluminum cookware and utensils.

Brockman said the consumer products division continues to account for roughly 10-15 percent of the company’s sales. In addition to the pressure cookers, the company manufactures and markets steam sterilizers (autoclaves) under the All-American brand name, as well as a line of professional weight, non-stick aluminum cookware marketed under the Chef’s Design brand name.

Brockman said the company continues to do work in the automotive sector. For many years, the QS9000 certified company was a tier two supplier to Detroit, but recently the company was awarded its first tier one contract to supply aluminum castings directly to General Motors. The firm’s executive predicted that sales in this area will increase, as automakers continue to convert iron castings and steel weldments into aluminum castings.

At the same time, he noted that Wisconsin Aluminum Foundry doesn’t want to become too heavily dependent on automotive, or on any one sector. “We’re in many markets – that’s one of our strengths, having a diverse customer base,” Brockman said.

Military support
He added that, while it’s unfortunate on one level, the rise in military spending related to the war on terrorism and the military action in Iraq have meant increased work for the company, whose castings can be found in the M-1 Abrams main battle tank. The company also manufactures marine grade brass castings for U.S. Navy nuclear submarines. This carries on a tradition of U.S. defense work that dates back to World War II, when the firm produced numerous cast components for U.S. Navy GATO-class fleet submarines.

Brockman said the firm did fairly well during the economic downturn that started in 2001, lasting through 2003. “That’s a credit to our outstanding work force, emphasis on lean manufacturing, and capital spending that reduced operating costs,” he said. He also noted that plant closings by some competitors “sent a ripple through the industry.”

Wisconsin Aluminum Foundry continues to employ about 375 workers at its 170,000-square-foot facility. In 2003, it shipped 11.8 million pounds of castings, which generated roughly $50 million in sales. The company is still a family affair – Milton Schwartz, the son of the company’s founder, is the chairman and treasurer and has worked there for nearly six decades.

“That’s allowing us to be competitive in this market,” he said. Much of the company’s work involves manufacturing highly engineered castings, which has strengthened the company’s position in the industry. Brockman said about 60 percent of castings produced are through the permanent/semi-permanent mold process, with the balance produced through the green-sand or airset molding processes.

Wisconsin Aluminum Foundry has also aggressively implemented lean manufacturing techniques in an effort to eliminate waste from its processes. A quarter of its workforce has completed lean manufacturing coursework and several production employees have traveled to a major customer in New York to see firsthand the impact of scrap castings on its customer’s manufacturing processes. Managers are required to submit cost savings ideas every two months.

In the end, the company’s greatest strengths are its employees, family ownership, and community ties. The firm has long had a profit-sharing program for employees as well as scholarships and other incentives. So cohesive is the company that management and labor unions have been able to work closely together on labor issues and contracts, resulting in only two work stoppages in the company’s 95-year history.

Earlier this year, Wisconsin Aluminum Foundry won a Wisconsin Manufacturer of the Year Award for its “Dedication to Wisconsin Workers.” Its goodwill extends beyond its front door – the company, in 2003, was a major donor for the Manitowoc Community Built Playground, a privately funded $350,000 project built by the people of Manitowoc for the benefit of its children and families.

It’s just one more example of a company that, facing global competition, shows grace under pressure.