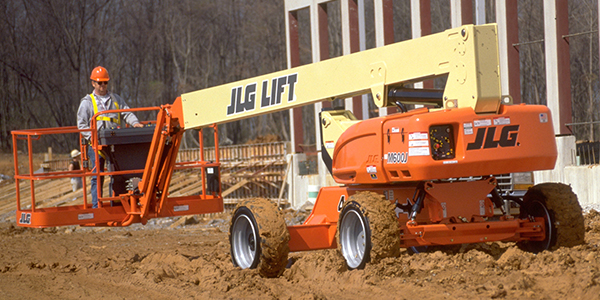 JLG Industries, Inc., the industry leader in access equipment, is celebrating its 35th anniversary this year, and has developed a special skill in telescoping.

But last year, the company took that talent to a new level – telescoping the operations of its formal rival, the OmniQuip business unit of Textron, into a lean and mean operation that could do more with less. The telehandlers, or rough terrain material handlers, that OmniQuip used to manufacture at five sites around Wisconsin and North Dakota, are now built on just two assembly lines at JLG Industries’ flagship plant in McConnellsburg, Pa.

The push at JLG Industries to develop flexible assembly lines that can produce several different types of equipment is just one way that the firm, with executive offices in Maryland, just across the border from its Pennsylvania factory, has been able to roll out new products even in the face of a withering recession.

“We focused on managing our way through the recession – we didn’t put our heads in the sand,” said Bill Lasky, the company’s CEO who has been running JLG Industries since late 1999. Since Lasky arrived four years ago, the company has opened a new facility in the growing European market and has expanded its financial arm offering credit to its customers, while continuing to introduce myriad new products every year.

In 1970, the company’s small crew of 20 employees produced the original JLG(r) Lift, an aerial work platform that rose to a height of 27 feet. Company officials note that despite a number of technological advances over the years, many of that first lift’s basic design concepts are still in use today. Its products allow workers with a lot of tools to do their job more quickly and efficiently in elevated work areas that otherwise would have to be reached with a ladder or scaffolding.

Expanding into Europe in 1977, JLG Industries had produced its first 10,000 lifts by 1986, and had constructed its first 100,000 lifts by the time the millennium was nearly over. A key factor in the company’s growth was its development of its scissor lift in 1973.

In 1999, JLG Industries made a major move into a new area when it acquired Gradall, a leading manufacturer of telehandlers and hydraulic excavators. Telehandler equipment enables workers to move and position material loads to elevated worksites. A telescopic excavator has a pivotally attached digging tool, rotatable about the boom axis, that cuts toward the machine through the telescoping action of the boom. It is used primarily for excavating or grading slopes, either above or below ground level.

Lasky said that JLG Industries is especially proud to be the leader in telehandler products because the operators of this equipment tend to be skilled workers who are particular about what product they use. He noted the products are particularly popular in Europe, where they are commonly used in agriculture as well as construction applications.

Innovation is key to growth
During the course of its history, JLG Industries has always been an innovator. Over the years, the Company has continually set the standard as the first firm to introduce 40-, 50-, 60-, 80-, 110- and 150-foot telescopic boom lifts. The company also introduced a state-of-the-art vehicle called Concept 2000, with a proton exchange membrane fuel cell.

Lasky noted that a lot of the focus in recent years has been building up the relationship between JLG Industries and hundreds of rental companies that now buy and lease out roughly 90 percent of JLG’s aerial lifts and 55 percent of its telehandlers.

“The rental company is looking for somebody that can give them a wide range of services, including training, parts and after-sales support,” Lasky said. “Service is a growing touchstone for us.” He said the company is also involved in the reconditioning, re-manufacturing and sales of used equipment. The firm’s Access Financial Solutions arm helps customers find financing sources for their equipment purchases.

Outside the economic recession, nothing has been a bigger challenge than the company’s $100 million purchase of OmniQuip, which produced both Lull(r) and SkyTrak” brand telehandlers. The success in integrating the production of the telehandlers into its McConnellsburg factory is expected to bring annualized savings of $27 million as well as provide the company with a better product mix between its aerials and its telehandlers.

“All integrations are difficult but if any one has been near perfect, this is it,” said Lasky. He said the smooth transition has been especially remarkable because federal antitrust clearance of the merge came in just 14 days, which considerably shortened the preparation period.

Just weeks after the merger received clearance, in early October 2003, JLG Industries began producing the SkyTrak Legacy model, which has a three-ton lift capacity and 36-foot vertical lift and is one of the most widely purchased telehandlers in North America. Shortly after that, it launched the Pennsylvania production of Lull brand telehandlers, known for their unique precision system that hydraulically moves the elevated boom along steel rails in the frame of the machine. The product is ideal for loading material onto scaffolding or other elevated work areas.

Lasky said he believes a key to the ongoing success of JLG Industries is its ability to consistently introduce new products and new accessories. “New products are our lifeblood, and on average approximately one-third of our annual revenues each year stem from new products that we introduce within the preceding two year.”

Meanwhile, Lasky’s sense of both humor and of innovation have kept JLG Industries strong during a rough patch that could have proved fatal to a less innovative company.

“We’re seeing an uptick,” the JLG(r) CEO said, adding with a hearty laugh, “We’re seeing the light at the end of the tunnel – and we’re pretty sure that it’s not a freight train.