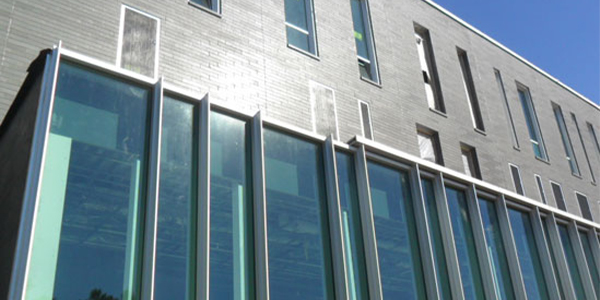 TRACO, a Cranberry, Pa.-based manufacturer of windows and doors, has been able to position itself recently as a quick respondent to construction demands, particularly following the events of Sept. 11, 2001.

For example: The company perfected and now regularly manufactures a line of blast-resistant products that resist high impact. These windows have a variety of applications, including government and military buildings, post offices, and “any buildings that require maximum security,” says Robert Randall, the company’s CEO. “Unfortunately, this is a sign of the times, and we’ve responded.”

The primary goal of the blast resistant windows is to preserve human life by protecting persons within a target building from injury and death due to catastrophic collapse and/or flying glass debris as the result of an explosion outside the building. TRACO tests these products extensively prior to release. Testing includes threat assessment, the estimated size and nature of the potential explosive device, as well as the standoff distance or setback, the distance from the anticipated detonation point to the building. Blast resistance is then measured by a series of tests designed to simulate the effects of explosions of various sizes.

Another product that the company sells in great quantities, especially recently, is a line of impact-resistant windows, specially designed to withstand the impact from hurricanes and other extreme weather conditions. The windows are designed to stave off winds of up to 200 miles per hour; they require no shutters and no boarding during hurricane season

“We’ve sold a great deal of these impact-resistant windows, especially in Florida over the past month or so,” Randall says.
Another of the company’s offerings is the VALU line of commercial windows and doors. This family of products consists of high-performance thermal aluminum, multi-chamber vinyl and composite windows and doors. They are designed for use on multi-family houses, motels and hotels and government buildings, and are targeted for distributors, dealers and general contractors that specialize in these trades. The VALU series is certified by the American Architectural Manufacturers Association and is commercially rated from LC25 through C45.

TRACO’s residential products are designed to help homeowners get continued enjoyment from their homes with a commitment to quality materials, advanced technology and custom craftsmanship, with such products as Low-E Argon, Heat Mirror and warm-edge technology. TRACO also offers the Power Two window system, a composite system that delivers the strength and durability of aluminum on the outside with the warmth and comfort of vinyl on the inside.

TRACO approaches all of its monumental tasks with a great deal of experience. The company has evolved from its beginning in 1943 to employ 1,800 team members and boasts five U.S. plants encompassing more than 1.7 million square feet of manufacturing space. Over the years, TRACO has grown to offer products that include window and door systems for a wide variety of commercial and residential structures, including some very visible national landmarks.

Historical projects
One of those major projects consisted of replacing deteriorating windows on the Statue of Liberty, one of the most recognized structures in the world, for its 200th anniversary. This was a very detailed undertaking for TRACO, as each of the windows to be replaced had to be individually measured because each was a different size. Sizes ranged from as small as 7.5 feet inches wide by 12.5 feet high to as large as 14.5 feet high by 31 feet wide. All the metal sections were cut by hand from flat bronze sheet using hand cut templates. The windows were then curved, bent, formed and brazed with silver solder. They were assembled with stainless steel operation hardware and hand polished to achieve a satiny finish.

TRACO’s other large project in the early 1990s was to restore some 6,400 windows in the Empire State Building. “This project was one that we resisted at first, then we looked at it as an opportunity,” Randall says. “The project took us about a year to complete, but it was worked on over the course of about seven or eight years,” he recalls. The project involved replacing windows that were original to the building when it was built in the 1930s, requiring the measurement of every single opening. The original steel, single-glaze double-hung windows were replaced with aluminum, thermally broken, dual-insulated windows. After the project was completed, Empire State Building managers did an energy calculation and found that they saved approximately $1 million a year as a result of replacing the windows.

Other notable buildings that TRACO has worked on include the United Nations Plaza, the Waldorf Astoria Hotel and the Helmsley Palace, all in Manhattan; the Drake Hotel and Civic Opera in Chicago, and the Omni Hotel in San Francisco. TRACO has also provided windows for the College of William and Mary in Virginia, Notre Dame University in South Bend, Ind. and Howard University in Washington.

Major concerns
One of TRACO’s biggest concerns when manufacturing its products is, strangely enough, the legal system.

“We live in an increasingly litigious society, and it comes into play often in our business,” Randall notes. For example, Randall says that there has been an advent of mold litigation recently. “Mold has become the new asbestos, and insurance companies no longer cover mold,” he adds.

Leaking can also be a problem, he continues. “When a building leaks, it could be because of many things, and there’s often a lot of finger pointing. We can sometimes get drawn in, because this is such a litigious society.”

Another point on which TRACO is focusing is energy. “This is not just because of costs, but because we need to improve our products to meet the Department of Energy’s high standards. There are requirements for U-value, which relates to penetration, and for heat penetration and loss,” Randall says. “We continue to upgrade the energy performance of our products.”

Nationwide source
The company does all of its work at its own plants, which are vertically integrated to extrude aluminum, thermalize, finish, anodize, paint, temper and laminate glass. TRACO is the only custom window manufacturer that tempers its own glass in house, using its own process that involves heating annealed glass to 1,200 degrees and then quenching it with jets of air. It also boasts a two-color paint system, which paints the exterior and interior of an extrusion in a single continuous process.
The company works out of five locations in the U.S. The Cranberry, Pa. headquarters offers one million square feet of space and is dedicated to commercial and architectural windows and doors. The Johnson, City, Tenn. plant measures 180,000 square feet and manufactures commercial windows; the 140,000-square-foot Miami, Fla. plant works with impact products; the Kingsport, Tenn. plant offers 140,000 square feet of space dedicated to curtain walls and skylights, and the Red Oak, Iowa plant has 170,000 square feet of space and works with residential and replacement vinyl.