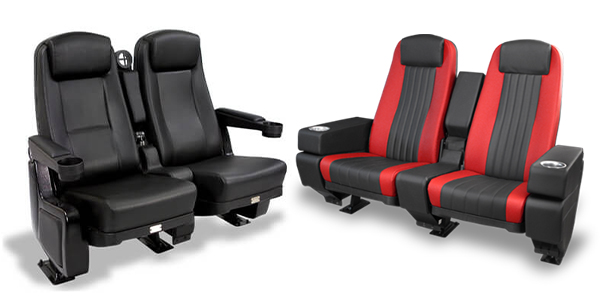 How much one enjoys a sports game, a movie or an opera has a great deal to do with the comfort of the seat. Nowadays, modern stadiums, theaters and even churches are equipped with cushy upholstered chairs with features such as cup holders, and ergonomically engineered built-in lumbar support. Mobiliario Seating, a Mexican company that specializes in seating for public events, takes the comfort business seriously.

Founded in 1975 by Juan Gonzalez Herrera, engineer, the company is now a significant global competitor in the manufacturing and commercialization of auditorium, stadiums and theaters seating, school furniture and folding furniture for events. At a young age, Gonzalez left a company of the competition start his own business and develop new ideas on his own. He began with a small workshop and a few operators manufacturing wood furniture. However, the creative engineer soon realized that new materials and technology offered his company better marketing opportunities.

He initiated a campaign to gather financing for the acquisition of plastic injection equipment, supported by the fair argument that plastic was a clean, recyclable material that did not contaminate the environment and offered a wide array of possibilities. Through the CAPFCE –the federal committee that administers construction of schools in Mexico-, and the CONAFE –the national council for educational foment-, Gonzalez achieved his first small contracts to manufacture school furniture.

Thirty one years later, Mobiliario Seating S.A. de C.V. is a global player with four lines of products and an international client portfolio that includes main movie chains in the United States and major stadiums in Latin America. Six years ago, after the unfortunate death of Gonzalez, doña Guadalupe Sandra Morano Guzman, his wife, took over the company’s direction and continued it as a family-owned business. Mobiliario Seating has accomplished contracts from 100 to almost 100,000 seats for one single client, and through a clever administration, has ridden with success the waves of Mexico’s economy including structural crisis and the advancement of the Oriental competition.

THE MARKETS
Mobiliario Seating’s most saleable product line is comprised by a variety of theater seats models, the largest market niche in the United States. “Our first product in this line was the Alessandria rocker, which is still the flagship of our company,” said Miguel Argueta, international sales director.

The chair has a rocker mechanism, love-seat armrests with self-skin pad, an ergonomically designed seat cushion, regular or foamed fabric and end panels with or without upholstery. The line offers several models with variations, such as the Allessandria Rocker and Fixed, Vesubio, Florencia, Concorde, Vicenza and Convention, the Alessandria 35, or de Audi Scala, with a tube pedestal, fixed armrest, rigid polyurethane armrest pad, and gravity lift seat with a weight. The line offers a variety of models, widths, finishes and fabrics. The top of the line is the VIP model that can be adjusted according to customer requirements.

The original product line, school furniture, which the company started for the educational market, was designed with students’ and teachers’ comfort in mind, in addition to the durability and low maintenance necessary for this type of environment. Mobiliario Seating school furniture employs plastic and metal in comfortable designs that follow international ergonomic standards. The school furniture line includes stackable stools, kindergarten tables, binary tables and teacher tables. Students’ tables include tablet arms with drop support, individual tables with a storage basket, and stackable arm tables. These models come in colorful finishes and excellent resistance to heavy duty use. “Our school products have found a receptive market in Central and South America. Also, it is a market that remains steady throughout, despite the economic crisis because governments always make annual provisions for school furniture acquisition,” Argueta explained.

A third rising market with great potential is the stadium seating segment. Mobiliario Seating launched its campaign in Latin America with great results. In 2005, the same campaign was launched in the United States and created great expectations. “This market is significant but infrequent due to these projects’ scale. However, we are actively looking for working partners that would create good contract opportunities,” said Argueta. An example of auditorium seating is the Roma chair with fixed armrest, with or without holder, plastic or upholstered seat and back, ADA end standard, folding tablet available in 20” and 22” width, and floor and riser mounted.

The company has also been successful at manufacturing folding furniture for events, a line of product that has placed Mobiliario Seating in the forefront of the Mexican market.

“Due to our contact with suppliers and clients at international exhibits and fairs, and from our own market research in specialty magazines, we are constantly aware of the market trends. Mobiliario Seating, although it follows those trends, have developed a unique product identity with great market acceptance,” he said.

PUTTING THE MONEY DOWN
Through its 31 years of experience, Mobiliario Seating has invested heavily in the acquisition of the most advanced technology in the industry. The 60,000 square meter plant located in Naucalpan, state of México, houses 220 different production machines such plastic injectors, presses, stamping and folding equipment, and high frequency carpentry machines. The plant also includes a laboratory to maintain casts, machinery and tools, and an immersion washing system. “Most of our equipment is of American, German or Japanese origin such as Cincinnati, Kraus Mafei and Komatsu, and we have invested over $80 million in developing an integrated structure that allow us total control of product quality and delivery time,” explained Argueta.

The manufacturing process starts with cutting and folding pieces in the exact sizes and shapes, and welding the pieces together without any waste. Pieces are folded with special equipment and undergo a washing process before the thermoplastic painting and the chair’s final assembly. Injection of plastic pieces include mixing the pigment with the plastic granulate and other additives, after which the automated manufacturing line produces the pieces for seats, back seats, arms, cup holders and other pieces by injection.

The company’s main competitors are Irwing Seating, Seating Concepts, Inorca, Camatic, Figueras, Greystone, Euroseating, Ferco Seating, and Oriental producers. In an effort to compete with new massive producers such as those from the Oriental competition, Mobiliario Seating has adapted several steps of the process, casting pieces together and reducing the processing time of each model. “Every year we show our products at international fairs, we find copies of our products made by Oriental manufacturers. The look is similar but the quality is never the same. Many clients, pressured by low prices, have tried to purchase their products but soon they realized of the poor results,” Argueta affirmed.

The company hires 900 operators that can build 1500 seats per day, offering the best turnaround time in Mexico. Annual production in the theater chairs line is 360,000 pieces while the school furniture is 480,000 pieces. Argueta remembered a record contract in 1996, when they delivered 3500 seats in 15 days. “We responded to an international customer, which had hired a company that declared bankruptcy. They came to us as their last resort and we became their first resource,” said Argueta.

Mobiliario Seating started exporting 11 years ago, and since then it became one of the leading companies worldwide, with important clients such as Regal Cinemas – now Regal Entertainment Group – Harkins, and United Artists. “When the 2000 crisis hit the industry, many small movie theater companies declared bankruptcy, and were unable to honor their contracts. Thanks to our loyal customers, we continued with our compromises,” Argueta said. The company exports to the United States, Canada; the Caribbean, including Puerto Rico, Dominican Republic, Antilles, Bahamas and Barbados; Central and South America, including Guatemala, El Salvador, Costa Rica, Nicaragua, Honduras, Panama, Colombia, Venezuela, Bolivia, Peru and Chile.

The national market also recognizes the company has a leader in product development and competitive prices. The company encourages its clients to examine its products, not only in design but also in their engineering and structure. “We sample the products and offer different sections to examine parts and components so they can be compared with others from the competition,” he said.

The company has worked for 10 years with Harkins Theaters, and responded to its client’s challenge with the rocker love-seat, a chair that did not exist in the market at the time, over 20 years ago. Other important clients have been the United States federal government, Monterrey arena, the Palacio de Bellas Artes and the Mexico City Theater, among others.

INTERNATIONAL RECOGNITION
The company has been recognized two consecutive years for its export activity with the national award to exports. It has also participated at international fairs and events such as the ones organized by Bancomext; Showest Las Vegas, Nevada; Showeast Orlando in Florida; IAAM; Neocom; Show Canada; Feria Internacional de La Habana; Expocruz in Santa Cruz, Bolivia; multi-industry fairs in Costa Rica, Panama and Guatemala, and the exposition of the cinematographic industry in Amsterdam. Each year, Mobiliario Seating participates at the event organized by Canacine and the furniture industry in México. This intense activity has increased the company’s sales to $20 million in 2005.

Mobiliario Seating products stand out for its quality, durability, comfort and pricing. The company has developed an outstanding customer service process, from negotiation to sales to product delivery and post-sale service. Delivery time is the most competitive of the industry, and products carry a five-year guarantee for parts and installation, when it performs full service. All of its products have been tested in laboratories in the U.S. and meet with all quality standards and required regulations.

“We have had no complaints so far despite the fact that we have installed products for over 20 years, such as the theater Sala Ollin Yoliztli in México, a building for cultural forums,” he said, “We have been recognized as a company at the forefront of the industry for our continuous creativity and innovation, such as a folding arm in combination with the reclining back seat.”

Since the company started exporting, growth has been impressive, to 52 percent in the year 2005 and projections of 8 percent for the next three years. National sales have also maintained steady, increasing 26 percent since 1999, with projections in the order of three to eight percent for the next triennial period. “We expect growth because of the new products we are launching for stadiums and arenas in new markets, with new technology based on plastic fused pieces. Our expansion strategy is based on investment and extension of production capacity in order to capture a higher number of clients while servicing the ones with which we already work. We actively look for new opportunities to provide evidence of our products, our services, and the pride of being a Mexican company that produces quality products for the world,” Argueta concluded.