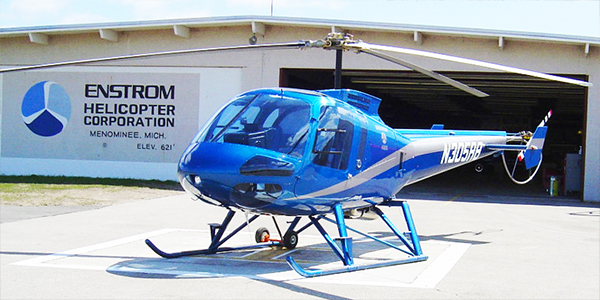 Enstrom Helicopter Corp. is a company with a colorful history spanning nearly four decades, including a long period, which the Northern Michigan company was owned by flamboyant attorney F. Lee Bailey. The firm also has a stellar reputation for innovative technology – but in the highly competitive helicopter business, neither invention or background is a guarantee of financial success.

But in the last three years, Enstrom Helicopter brought in a new management team with the savvy to bring the same talent for innovation to the company’s marketing efforts, and their efforts have been paying off in a big way. In that short period of time, Enstrom Helicopter has gone from manufacturing just a handful of copters a year to 17 in 2003, and they’re on track to nearly double that number this year.

The company recently beat out its bigger rivals to win a highly coveted contract to deliver 18 helicopters to the government of Indonesia, and now Enstrom Helicopter is looking to take on the lucrative law-enforcement market here in North America as well as a new joint venture in fast-growing China.

“It used to be more of an engineering than a sales company, but then when they brought in new ownership and some key people who’d been executives in the helicopter industry and changed our management team, the direction of the company has changed quite a bit,” said Tracy Biegler, the director of sales and marketing for Enstrom Helicopter. “The company is now certainly well suited to the markets that are out there.”

Upper Peninsula roots
Enstrom helicopter is a privately owned company dedicated to the design, production, and support of light piston-powered and turbine-powered helicopters. It specializes in niche markets such as training helicopters, foreign military and police, and individual owners seeking a stellar safety record.

The company’s roots trace back to the 1940s, when a lumberman and mechanic named Rudy Enstrom became interested in building a helicopter that could traverse the rural area of the Upper Peninsula of Mich. where he worked. Enstrom’s idea was subsequently discovered and backed by some local businessmen in the late 1950s, and Enstrom Corp. was officially organized in 1959 in Menominee, Michigan. By the end of the 1960s, the company had more than 10,000 shareholders – almost all of them in northern Michigan and Wisconsin.

Enstrom recruited experienced aviation designers who developed a more thoroughly engineered product. Over 300 of its early F-28A series were produced and in 1968, the company was sold to Purex Corp. When new management’s efforts faltered, well-known attorney Bailey entered the picture in 1970.The general aviation market was booming in the 1970s, and Bailey’s skill at marketing translated into success both for a remodeled 28-A and for a new model named the 280C Shark, which was named by Fortune Magazine as one of the 25 best factory-made products in the United States. During both the 1970s and 1980s, there were substantial engineering improvements that led to the 280FX Shark, the fastest piston-powered helicopter in the world.

In 1988, Enstrom launched into development of a larger, turbine-powered helicopter, leading to the company’s flagship model, the Enstrom 480, which was the first helicopter to result from substantial Computer Aided Design, or CAD. The Enstrom 480 quickly established itself as an international product, with over 70 percent of the first 50 deliveries leaving the United States to international destinations. It was upgraded over the years to accommodate emergency pop-out floats for water, snow shoes, a cargo hook, and eventually reengineered for larger weights.

Working for law enforcement
The F-28F Falcon is the workhorse of Enstrom Helicopter’s piston line. A 61-inch wide cabin provides comfortable seating for three people and features large, wide-opening doors. The safety and reliability of the F-28 has made it popular among flight schools, businesses, and law enforcement agencies.

Meanwhile, the flagship Enstrom 480B has now been certified in 13 countries and has already been operated in 15 countries. The 480B was FAA certified in 2001 with a higher gross weight rating than the initial version. Not only has the helicopter never suffered a fatality, but has flown four million hours without a rotor head failure.

The company is now roughly three quarters of the way toward fulfilling its $17 million order to the Indonesian National Police, the largest in its history. In addition to its traditional markets, the 480B is targeting opportunities in agricultural spraying and electronic news gathering. Annual sales have risen to roughly $21 million last year, while the number of employees has doubled from 50 to more than 100.

Biegler said that with predictions of overall civil helicopter deliveries being 55 percent light single turbines and only 19 percent pistons in the next nine years, company officials believe that turbine engine models will be the helicopter of choice in the coming years. He added that the most significant markets that Enstrom is targeting are the U.S. Airborne Police market and the worldwide training market. With the retirement of existing Vietnam era pilots in the US and the difficulty in foreign governments gaining access to U.S. training since the Sept. 11 terror attacks, the training market is also expected to be an excellent growth market, according to Biegler.

Now, the company is looking to work a co-production program with Wuhan Helicopter — Enstrom’s dealer for Mainland China since 1993 – to develop a $40 million manufacturing plant there. The negotiations and preparation for the launch of the project in Wuhan has taken more than six years.

The first stage of the plant, envisaging the construction of an assembly workshop and a heliport, will be completed by June 2005. The plant will be capable of producing 50 helicopters annually, mainly a civilian and police version of Enstrom Helicopter’s light helicopter models with a one ton load capacity.

That means that China will soon find out what the rest of the world is coming to learn.”Our turbine has the lowest acquisition and operating costs, an excellent safety record and excellent flight characteristics in high winds,” Biegler said. “We are the best kept secret in the helicopter industry.”