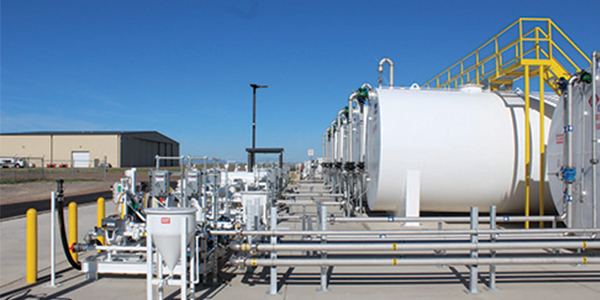 The people at Fuel Systems LLC are in it for the long haul – both literally and figuratively.The Michigan-based company – an industry leader in manufacturing and supplying fuel tanks for large- and medium-sized trucks – has been around in some form or another for the last seven decades, and has been thriving under a new ownership group for the last three years.

A good portion of the recent success at Fuel Systems has come from a rise in demand for the kind of trucks that are also in it for the long haul – large tankers that are now being upgraded for coast-to-coast trucking in the wake of new federal environmental regulations.

“Large fleets have been waiting for the new EPA emissions regulations and had been holding off their purchases for heavy-duty trucks,” said Tim Masek, the president of Fuel Systems. “Now we’re seeing that take off. And from a product standpoint, the customer is wanting a fuel tank envelope that will get more capacity of fuel.”

What Fuel Systems does may seem like your basic, Rust-Belt heavy industry, but the company does a lot of research and development work, both at its headquarters in Grand Rapids, Mich., and its satellite plants, to stay on top of the latest trends in tank design or emission control.

Deep roots
“We’re always looking at new materials and new technology and new applications that will make us better and help us differentiate ourselves from our competitors,” Masek said recently.

The technology may have changed dramatically over the years, but the basic focus of Fuel Systems and the companies that preceded it have been pretty much the same since early in the 20th century. Masek said that the long and tangled roots of the firm trace all the way back 70 years to the heyday of industrial manufacturing in Chicago, when its predecessor was a unit of Briskin Manufacturing.

After a series of buyouts and acquisitions, the fuel-tank-making unit became a division of the BorgWarner conglomerate. In early September of 2001, TMB Industries, a private equity group, acquired the Fuel Systems business from BorgWarner, with terms that were not disclosed at the time of the transaction. Equity participants included both principals of TMB Industries and Chilmark Partners, with LaSalle Bank financing the transaction. The new business entity was re-christened as Fuel Systems LLC. By that time, the company headquarters had migrated to Grand Rapids.

Principals of TMB also own and operate other industrial companies, including Transportation Technologies Industries Inc. (TTI), a supplier to the truck OEM market and the truck aftermarket. Masek said the new buyers of the company are “buyout specialists who go around acquiring Rust-Belt-America type companies and try to add some value and make the company a greater force in the industry.”

The early days under Fuel Systems’ new management, the CEO said, gave executives a chance to carefully evaluate what areas the company needed to bulk up, and which units it needed to shed.

“We wanted to be the best in our defined marketplace,” Masek said. “What we have done is we’re really leveraging our strength – the ability to manage a product and the ability to offer fuel dealers solutions, and so we stuck within the marketplace where we can deliver our core competency to our customers.

One-stop source
Fuel Systems doesn’t release annual revenue figures, although in 2001 its yearly income was reported at roughly $75 million. Today, the company employs about 450 people at its five locations across the country, including a core of about 20 at the Grand Rapids headquarters.

The company bills itself as one-stop source – from design to delivery – for top-of-the-line fuel tanks, regardless of the application. Fuel Systems handles everything from raw stock to finished product, including stamping, bending, forming, piercing, trimming, welding and finishing operations. Its plants are completely configured to handle steel, aluminized steel or aluminum regardless of the configuration required

The company’s Chicago plant, which employs about 40 people, specializes in resistance welding, both conventional and soudronic. The plant, which has been operating since 1975, mainly serves General Motors and helped the automotive giant launch two products, the 560 and the 610.

The Springfield, Ohio, plant, with 130 workers, offers modular fuel tank assembly, line sequencing, robotics for high-volume applications, and a state-of-the-art powder coat system for its primary customer, International Truck and Engine. The facility has been credited with turning around International’s 8600 conversion tank in a very short period of time.

The factory in Walker, Mich., provides Ford Motor Co. with robotic welding, powder coating, and helium leak testing. The Walker unit received Ford’s Q1 rating and also was certified under ISO 14000 standards after it rearranged the entire plant for one-piece flow and other lean manufacturing concepts, while at the same time ensuring that the customer received their product on time.

Three times since 1999, the Wytheville, Va., plant has been asked to work with customers on new product launches, performing concurrent engineering activities each time. This plant, which works closely with both Volvo and Mack Trucks, offers stamping and robotic welding capabilities for complete cylindrical and rectangular steel and aluminum fuel tanks.
And on several occasions, major customers like Freightliner and International came to the Charlotte, N.C., plant, where about 100 people work, needing heavy-volume production to roll in under a week, even though design prints had not yet been developed. The job was a success each time. The plant also services Oshkosh Truck.

“We really see that we’re going to focus on our marketplace,” Masek said. “We’re focused every day on developing some new product innovations and helping our existing customers and hopefully attracting new customers. One of the things over the last few years is we’ve done a lot of reshaping of the company that used to be a small division in a large conglomerate.”

Fuel Systems may never be a large conglomerate, but it’s already a player at what the company does best.