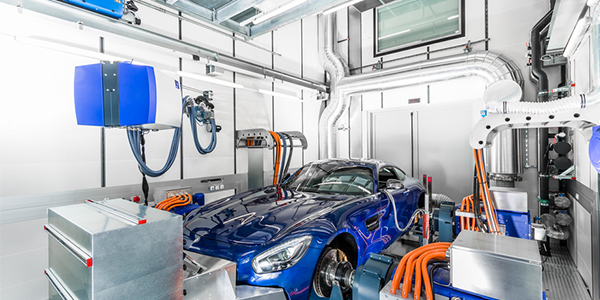 Both small and large engine manufacturers face increasing demands for improved performance not only from consumers, but from new government
regulations requiring lower emissions and higher fuel efficiency. Internationally, AVL (“Anstalt f?r Verbrennungskraftmaschinen” or “Institute for Internal Combustion Engines”) provides both contract powertrain systems engineering as well as the instrumentation, test and simulation systems required to ensure engine manufacturers around the world achieve these exacting performance standards. Founded in 1946 in Austria, AVL is widely recognized for being first to market with a number of engineering and test innovations. These include the first direct-injection four-stroke truck diesel engines with swirl ducts in 1958, the first system to test a real engine under virtual operating conditions in 1985, and, most recently in 2004, the introduction of EmIQT, an intelligent emission reduction approach that reduces the pollution from a conventional diesel engine by up to 99 percent.

A growing trend is to enhance physical testing of engine and vehicle subsystems with “virtual prototypes” – computer simulations of whole vehicles and/or components that are not physically part of the test setup. “These new software tools are becoming much more accurate at simulating the real-world behavior of finished products,” says Phil Kingham, director of strategic marketing, “and AVL is able to offer our customers these advanced simulation technologies in the real-time test bed environment. That allows them to do more testing sooner in the development process before prototype hardware exists for all components.”

Service Scope
This is part of AVL’s overall strategy to provide engine makers, whatever size or segment, with a “one-stop shopping” source. “AVL provides a full range of these products and services to the automotive industry, both the Big Three and their suppliers at all tier levels, as well as recreational vehicle and other small engine manufacturers,” Kingham says. “We’re unique in that while there are a variety of small companies that compete with us in specific markets, we’re the only company that provides the breadth of products and services across the broadest range of markets.”

Kingham notes that back in 1978 AVL first gained its international reputation for comprehensive modular test bed solutions with its PUMA-branded software system. “It remains the brand identity associated with AVL,” he says. “Today, AVL PUMA Open is more than just a high performance test bed automation system, it is a management system that effectively increases productivity for test bed operations. Based on the core functionality required for all applications, PUMA Open is configured in scaleable, application-oriented packages that can run 24 hours a day. As its name implies, PUMA Open stays open, meaning that customers can always upgrade their package and thus achieve greater functionality. Moreover, customers only need one platform for all test beds, resulting in improved operational continuity, data exchange and archiving; in addition, test bed personnel need only be trained on how one test bed functions and are subsequently capable of operating every test bed.”

AVL’s North American market is defined as Canada and the United States, with AVL Spain handling sales to Mexico. The company maintains its own direct sales force. “Some of the larger companies with their own engineering staffs frequently are just looking for us to supply components that they plug into their own systems. They know what they need and the job of the sales force then is to make sure they get the right equipment on-time,” Kingham says. “Other customers are looking for us to design the testing application, and in many cases want us to engineer a total solution using our own tools. We can provide whatever capabilities, however simple or however complex, that best fit the customer’s requirements.”

For some customers, AVL may supply a simple diagnostic instrument that might cost about $15,000. For other customers, AVL might design and deliver a complete $2 million test cell. It can supply components on demand, or it can design complete test solutions and, in some cases, act as the project systems integrator to co-ordinate all subcontractors and provide the customer with a single point-of-contact.

Kingham points out that the North American subsidiary imports components from its parent company operations, and therefore does relatively little manufacturing in-house. What manufacturing it does perform is the result of continuing operations of small domestic companies it has acquired over the years. The shop floor is kept busy, however, assembling the imported components and sub assemblies into complete, fully tested systems.

Test Growth
“Much of our growth has been organic, but when an acquisition makes strategic sense, we certainly want to pursue it. Over the last five years, three of the four companies AVL acquired have been in North America. On the other hand, we haven’t bought anyone in the last two years. So it’s more a case of when opportunity knocks than planned expansion through acquisition,” Kingham says.

Kingham points out that as engine systems have become more computerized and complex, so too have testing systems. “Thirty years ago, powertrains used to be separate mechanical systems from engines, but today they’re electronically intertwined and you need test systems that control and measure those kinds of interactions. Also, if you’ve taken an engine from, say, a Pontiac Grand Am and put it into a minivan, the transmission is going to shift differently and you need an entirely different set of tests for that engine.”

Many of the new opportunities in North America for AVL’s testing solutions of late, however, have been driven primarily by legislated regulations for fuel economy and improved emissions standards. “It’s not just automakers that have to be up to speed with these requirements, but the smaller recreational vehicles, as well,” Kingham notes. “Even if you’ve got equipment that is still fairly up-to-date, new requirements mean processes have to be updated and test procedures have to be redefined. That can become a large expense item.”

AVL sees opportunities even as the U.S. auto industry is challenged to become more efficient. “Despite its overall financial problems, the auto industry is willing to spend money in the short-term if the long-term result is greater productivity and cost-savings,” Kingham says. “One thing that’s happening is that technology is making the production of niche cars more cost-effective. Niche vehicles have shorter product life cycles, and there are more of them. For AVL, that means there’ll be increased demand for instrumentation and test tools that make these kinds of vehicles more viable.”

Consequently, Kingham is cautiously optimistic about future growth. “We have a broad customer base, from OEMs to their suppliers, from high production automakers to smaller recreational vehicle manufacturers. So, usually, if one segment is a little flat, business picks up somewhere else to compensate. Also, with 2007 legislation on fuel and emissions standards, everyone has to get up to speed; it’s not a discretionary spending item.”
One factor that may play in AVL’s favor is that its two main competitors were recently bought by Japanese companies. “We’re still evaluating how this will shake out, whether the new ownership will continue business as usual or try to change business direction for one or both companies. In either event, the uncertainty creates opportunities for us to further establish AVL. Our reputation is as a high-tech, high-performance solutions provider, but that also means we’re not the low-cost provider. However, we think we can demonstrate that a slightly higher cost is worth it for a solution that ultimately results in improved productivity without compromising accuracy.”

That’s a test where AVL continues to receive the highest marks in the industry.