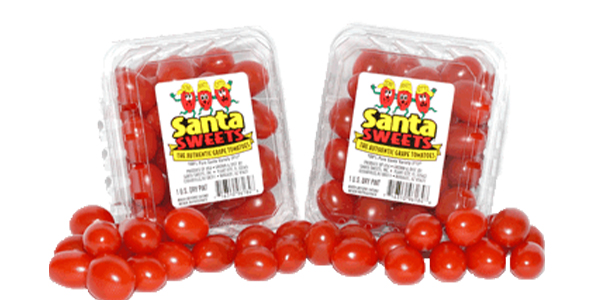 There are few people who know more about the produce industry than 78-year-old Joseph Procacci, who sold fresh vegetables and fruit for his immigrant parents on the streets of Camden, N.J., and later became the head of a thriving wholesale business in Plant City, Fla.
But about six years ago, Procacci made a discovery that would forever change the fortunes of his business.

That was when the CEO of the company now known as Santa Sweets discovered Asia.

Since then, Procacci has worked with both Asian growers and with his own research and development staff back home to revolutionize supermarkets’ produce sections with new and tasty tomatoes, and other fruits and vegetables.

Today, Santa Sweets is one of the nation’s top producers of grape tomatoes – having cornered about 60 percent of the market in North America – and is winning kudos for its newer and popular UglyRiper tomato. And Santa Sweets is in the process of introducing two new innovations to produce shelves: a super sweet melon dubbed a Can-A-DewTM, as well as a seedless mini-watermelon.

If there’s a common thread to the innovative new products introduced by the Plant City-based Santa Sweets since the start of the decade, it is making fruits and vegetables that are not only nutritious, but taste great as well.

“We know what the customer wants,” Procacci said. “I could show you hundreds of letters we’ve gotten about the UglyRipe,” which has been slowed by a bureaucratic dispute with the Florida Tomato Committee (FTC), a federally sanctioned panel of competing growers that set size and shape standards. “People are passionate about good tomato slices.”

Procacci developed his passion for tomatoes at a very young age, helping his parents with their pushcart in the industrial city of Camden when he was growing up in the 1930s and 1940s. Eventually, he drove a produce truck, and after World War II ended, Procacci and his brother Michael opened a wholesale business in Allentown, Pa., before setting up shop in Plant City in 1948.

From the days it opened, the business that came to be known as the Procacci Brothers Sales Corp. has specialized in tomatoes. “To me, tomatoes were – and still are – one of the top selling types of produce, and we thought we could do a good job,” Procacci said.

Procacci Brothers is the number one wholesale distributor of produce in the United States. Along the way, Procacci was indirectly helped by an unlikely source: Fidel Castro. When the longtime dictator took over Cuba in 1959, he also nationalized the tomato farms that had supplied Procacci. When one leading farmer migrated to Florida in 1961, Procacci partnered with him and entered the business of growing produce as well. By 1968, Procacci Brothers had expanded to other types of produce, and today, Procacci said, the company handles “everything from apples to zucchini.”

The direction of the company began to change dramatically after 1999, the year that Procacci first toured Asia to look for potential new products. Already, the produce industry had changed dramatically going from about 100 items that groceries routinely stocked in the 1970s to about 300 today.

“I go through Asia every year in January, and at that time I try different varieties,” Procacci explained. “If I see something that looks promising, I’ll ask for the seed, buy it and try to grow it here.”

Procacci struck pay dirt on his very first trip, when he tried a variety of tomato in Taiwan that was sweet, small and oval. The Santa SweetTM Grape Tomato was born and quickly became the top selling brand of tomato in America’s supermarkets.

“The taste is what sells this product – it’s superior to any other tomato on the market,” Procacci enthused six years after that first taste. Because the variety is a specially grown hybrid, none of his rivals are able to duplicate the grape tomato sold by Santa Sweets. “You would have to completely start from scratch – it would probably take you 10 to 15 years to develop a variety like ours,” he said.

To keep up with the demand, Santa Sweets now grows its special hybrid at seven different locations scattered across Florida, North Carolina, New Jersey and Mexico. The distribution sites for Santa Sweets are located in Plant City, Fla., Cedarville, N.J., and Nogales, Ariz., as well as a winter packing site in Guaymas, Mexico.

After its success story with the Santa Sweets, the company began marketing what is known as an “heirloom tomato, which unlike a hybrid is a variety that has been around some 40 to 50 years with little modification.

Santa Sweets spent millions of dollars over 20 years in developing the “Maramondo” variety originally marketed in France, which have an odd shape and a rough surface – hence the brand name of UglyRipe. The brand has been a huge hit with consumers because of its thin, tender skin and juicy plumpness, but much of the recent publicity over the product has concerned the feud between Santa Sweets and the Florida Tomato Committee.

The FTC – citing not the taste but the unusual shape – won’t let the company market the tomatoes it had been growing there in winter months. Procacci blames the dispute on jealousy among Florida’s home-based growers, and there is legislation in Congress seeking to overturn it.

The dispute hasn’t stopped Santa Sweets from forging ahead with two new promising fruit brands, each based on the principle that what shoppers mainly want from produce is sweetness.

The Can-A-Dew is a new sweeter melon variety that looks like cantaloupe on the outside and honeydew on the inside, but, thanks to its sugar content of 18 percent, compared to 7 to 12 percent for regular melons, is far tastier than either. The flavorful seedless mini-watermelon, with its exceptionally thin rind, is due to hit the market shortly.

Procacci said the higher sugar content in the new Santa Sweets products is key to their success. “People are being told to eat more fruits and vegetables by their doctors, but if it’s just 5 percent sugar it doesn’t taste too good – it’s bland,” he said. “But if it’s 18 percent, now that’s something else.”

It’s hard to believe, but after a long career as America’s top produce man, Procacci has found that success can be even sweeter.