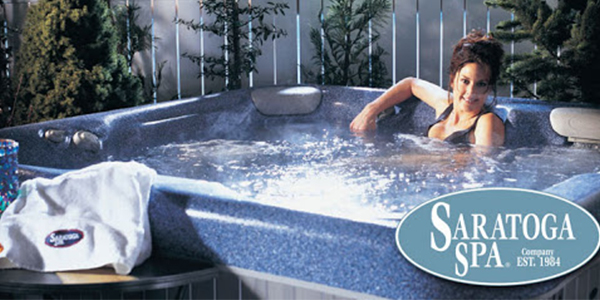 Relaxing? Absolutely. Therapeutic? Definitely. Fun? Positively. And more than that, there is the “aah” factor the luxurious feeling of immersing in the soothing waters of a home spa. And who would understand the attributes of a spa better than the innovative thinkers at Saratoga Spa and Bath Co., Inc., an industry leader in designing and manufacturing high-quality hydrotherapy units.
“It’s our intention to make a better, more distinct spa, not to constantly make a larger number of spas,” says Anthony Brennan, chief operating officer of the New York business. “We are out to make a product that is truly unique.”

In the 18 years since Saratoga Spa was started as an offshoot of Imperial Pools, the manufacturer has introduced technology that makes its units stand out in the market and gives the more than 200 dealers nationwide plenty to offer customers.

Among the 10 patents held by the manufacturer: Coplanor Fluid Ejector (CFE) a hydrotherapy system that moves water in a stream parallel to the body.

Power Massage™, the original coplanar, which runs a ribbon of water down the neck and back.
Power Massage Plus™, two adjustable hydrotherapy coplanor jets in one for the neck and back.
Power Stream, a horizontal jet that gives soft massage action while moving water in a streaming motion.
Roto Stream, a valve that provides a sequencing of water jets for different massage features and strengths.

Not your ‘60s hot tub
According to Brennan, the defining Saratoga Spas feature is its hydrotherapy technology. “Our patented hydrotherapy system is what sets us apart,” he states. “You definitely have to experience the product – you can’t just look at it. This is the spa owner’s spa. This is the one that spa owners move up to once they’ve had a home spa.”

To spa users, the hydrotherapy system means personalized comfort and the potentially healthful benefits of water massage. In technical terms, the system is a skillfully engineered network of pumps and jets. Hydraulics that provide the power include manifold plumbing, dual-speed pump(s) and a turbo boosted air induction system. The controls are connected to Versa-Flo® valves that provide balance in each seat and use a strong blower to pump air through dedicated jets and power the turbo boost system.

Then there are custom features that enhance the home spa experience. Brennan says that built-in entertainment centers and lighting systems are currently the most popular options. Choices include: a stereo/CD player, a pop-up TV/DVD system (coming soon) with a remote control for the TV and stereo, Colorblast digital lighting, and Colorsplash interior illumination with air and light movement and sequential control.

A flowing process
Saratoga Spa shares an address in Latham, N.Y. with Imperial Pools, its parent company and one of the nation’s oldest and largest privately owned manufacturers of galvanized steel, in-ground pool kits and pool accessories. The approximately 150,000-square-foot spa facility houses both the administrative and manufacturing areas.

Brennan says that the most challenging part of the manufacturing process is keeping the product stream moving through a system that requires installation of numerous parts. He credits the company’s suppliers with providing electrical and plumbing components in a steady stream that feeds the process. He also cites the company’s staff for involvement in Saratoga’s ongoing program to develop spa technology.

Saratoga Spa makes most units to order with proprietary molds to form the tubs and hand-builds the cedar cabinets. Lead time from order placement to delivery is currently three to four weeks. The company’s four product lines represent different combinations of features and options. The models offered in each line are named for areas around Saratoga Springs, N.Y., a location that has been famous for its carbonated mineral waters and health resorts since the 1700s.

• Adirondack: Saranac, Georgian and a third model in development for sale through distributors.

Brennan points out that the Saratoga Safeguard System puts each spa through a series of rigorous tests and inspections before it leaves that factory. He also notes that all standard units carry the UL® listing from Underwriters Laboratories in addition to the manufacturer’s warranty on parts and construction.

Brennan predicts the market for home spas will grow appreciably in the next two decades. “I believe that the product is still in its upward climb. Consumers are comfortable owning a pool because they probably grew up with one. This generation will grow up with home spas, so our opportunity is exponentially in front of us.”

In naming the market drivers for spa purchases, he also cites the health issues and the changing needs of aging baby boomers. “The relaxation and therapeutic values of spas are being recognized and will grow during the next 20 years. As people become more familiar with spas, they will become more a part of homes – not a luxury, but another facility in the home.”