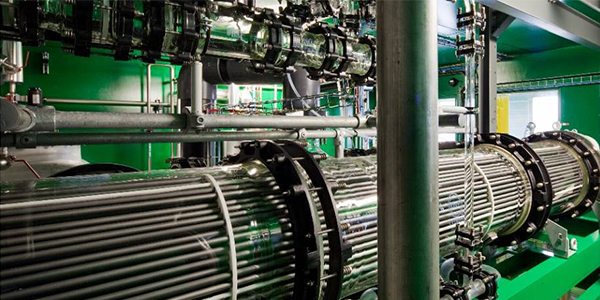 As one of oldest companies in the world (founded in the Alsace Region of France in 1684), De Dietrich survived the French Revolution, the Franco-Prussian War, World Wars I and II, the Cold War and all of the economic depressions in between, so it should certainly be able to shrug off the current economic malaise. And it is giving a clear indication of doing just that. There is much to be said about a 318-year track record.

Indeed, “we are continuing to roll out new products and services, adding to our sales force, and showing that even in times of change and uncertainty, companies can still grow and move forward,” says Don Doell, president of De Dietrich Process Systems, the Union, N.J.-based North American arm of the global company. Parent De Dietrich is based near Strasbourg, France, and steeped in history. According to lore, the French national anthem “La Marseillaise” was first played in the founder’s home.

Never heard of De Dietrich? “Unless you’re in the chemical/ pharmaceutical business, we’re not a household word,” concedes Vince Rocca, DeDietrich Process Systems’ director of sales. In addition: “The industry is in a malaise. Pharmaceuticals are in turmoil, chemicals are down, agri-cultural chemical companies like FMC and Monsanto are struggling with reduced demand.”

The Answer
But rather than retrench, DDPS’ response has been to remake itself, positioning itself for the upcoming upswing. Until 2000, when it was sold to an investment bank, the company was the longest running, continually owned family business in the world. Gilbert De Dietrich, a descendant of the founder, still has a minority stake in the company.

In the wake of that changing of the guard, DDPS emerged as the unified combination of De Dietrich Glass-Lining and companies it had recently acquired, Rosenmund Guedu and QVF. “Now, our major customers, like Pfizer, Merck, Schering Plough and BMS, instead of dealing with three different companies, deal with one,” Rocca explains. “Our consolidation on the supply side gives them sole-source interaction.

“Instead of going to one guy for a valve, one guy for a mixing tank, and one for a filter device, they can come to one company and get individual components,” he continues. “Because we have specialized knowledge and expertise about these products, we can then put the piping together, so you can have almost a complete little pharmaceutical plant from us now. That’s the core message that we’re trying to get out.”

Full line
What exactly does De Dietrich Process Systems do? “We are a world leader in the manufacture of glass-lined equipment for the chemical industry,” Doell explains. “We make a full line of unjacketed, conventional jacketed and split pipe coil jacketed reactors, essentially big tanks with a glass lining, as well as storage tank receivers, columns, dryer-blenders and Nutsche filters.”

The Rosenmund portion of the reconstituted DDPS, meanwhile, brings filters and filter dryers to the product mix, and QVF makes clear glass. With the combined product array, “We can put together a self-contained, engineered mini-plant,” Rocca reiterates.

Besides its New Jersey headquarters and sales office, DDPS has its main manufacturing plant in Corpus Christi, Texas. The 100,000-square-foot cutting-edge facility on 40 acres, “is the world’s most modern glassing facility,” Rocca says.

Equipment for the Rosen-mund product line is made in Switzerland and assembled in Charlotte, N.C. for North American distribution. QVF products are manufactured in Germany and distributed in North America through the New Jersey office.

And DDPS continues to aggressively expand, the slow economy notwithstanding. Earlier this year, for instance, it acq-uired Glatt Inox, a Swiss company providing products in the mechanical drying business.

“We have made an acquisition a year for the last three years,” according to Doell. “One of our strategies has been to grow through acquisition.”

More new products
The company also is continuing to actively launch new products, the most recent being a new powder transfer system (PTS), which helps put powders into mixing reactors. “It operates like a large vacuum,” Rocca explains.

“The PTS collects the material and is able to place it where it is needed,” he continues. “It allows pharmaceutical companies to safely transfer powders to where they are needed. It also prevents harmful dust from entering the atmosphere or a building environment. With PTS, hazardous materials or high-potency products can be handled safely. About 95 percent of our customers for PTS are in the pharmaceutical business.”

Another recent new product launch is an OptiMix(r) reactor with a new basic design. “The new reactor incorporates integral sidewall baffles, a feature not previously available,” according to Rocca.

Back to the future
For the future, and despite the current slowdown, “We expect that the pharmaceutical sector will grow the most, and that’s our target,” according to Doell, “and within the industry, there are companies known as active pharmaceutical intermediates [APIs] that we are particularly excited about in terms of their growth prospects.

“APIs are those pharmaceutical companies that are involved in the front and middle portion of medicine tablet manufacturing,” he continues. “They do all the work before the product is actually formed and shaped into a tablet.”

Beyond that, Doll says, “We want to continue to emphasize our capabilities in the engineered systems area, especially the engineered mini plant. Ultimately, we want to position ourselves as a company that can offer complete process solutions to pharmaceutical companies.”

With a track record of more than three centuries, and with a goal of tying its star to industries that figure to be in the forefront of long-term growth – pharmaceuticals and chemicals – De Dietrich Processing Systems is ready to roll.