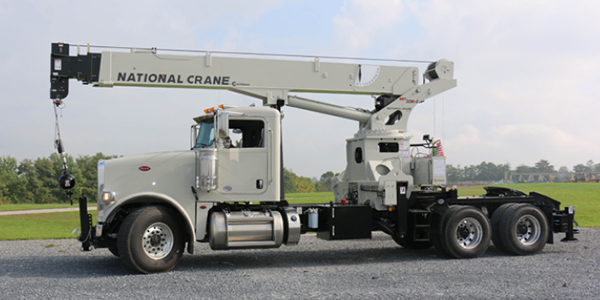 From the set of the movie blockbuster “Titanic” to the Army Corps of Engineers, National Crane has been providing a top-level product since its inception with a philosophy of attracting strong distributors while holding true to its mission of ongoing product innovation.

The story of this major supplier dates to 1963, when it was founded as a small family business. By the early 1970s, the company’s steady growth had captured the attention of larger corporations; in 1978, the company was acquired by Kidde Inc., a substantial, diversified corporation with significant holdings including Grove Manufacturing, a major producer of mobile hydraulic cranes for the world market. In 1987, Kidde Grove and National all merged into Hanson Industries. In the spring of 1998, National and Grove merged under the umbrella of the Grove Worldwide Companies, and then were acquired by a group of investors led by the investment organization of Robert M. Bass.

National’s alliance with Grove and the new owners provided a strong and stable financial base that encouraged aggressive product development. Its top-level reputation in truck-mounted cranes, its strong distribution network and its design expertise enabled National to soon become the nation’s No. 1 truck-mounted hydraulic crane designer. National also maintains its comfortable lead as a manufacturer of telescoping cranes; it is among the top three North American crane marketers.

“We’ve increased capacity and boom length,” says President Ted Urbanek in describing how National has sought to continually upgrade its product line. By using a manufacturing system he describes as “designed for manufacturing assembly,” National also has been able to produce a more cost-effective machine. “What we’ve tried to do is take the cost out of the product without affecting quality,” he explains. “What we go for are common parts and fewer parts.” By streamlining its manufacturing process, National has been able to achieve a cost reduction of between 5 and 18 percent, he says.

“We’re in a very competitive market,” he adds. “In order to supply those markets, we need to cut costs as much as we can without sacrificing quality.” Right now, 60 percent of what National produces goes to the construction market; next in line are the oil field, railroad, government and industrial markets. But virtually every industry has taken advantage of National’s expertise. The firm’s list of customers includes all major U.S. railroads, the Army Corps of Engineers, general contractors nationwide and construction companies. The Tennessee Valley Authority is one of National’s customers. Movie sets such as the set of “Titanic” and sports illumination specialists such as Musco Lighting and B&B Lighting have used National’s cranes. Pedestal-mounted crane designs have been developed by National to serve the marine and other industries, where there is a need for fixed, stationary lifting, loading and unloading; typical installations are in factories, towers, yards and on docks.

Many crane orders involve trucks, in which the current preferences are for rugged and powerful diesels, including GMC, Freightliner, Volvo, International/Navistar and Peterbilt. The engines range from 190 to 410 horsepower and configurations range from single to three-axle, with a definite trend toward adding a fourth axle in either a pusher or tag-axle position for increased payload capacity.

More Space to Keep Pace
To facilitate manufacturing, the company has added 50,000 square feet, consisting of a state-of-the-art conveyor-paint system, to its Waverly, Neb., facility, which now measures 305,000 square feet. The company also has kept pace with a continuously improving market position; about 450 employees turned out more than 1,400 units in 2000.

As it has succeeded in keeping up with ever-changing technology. National has had to respond to trends within its industry, such as the demand for bigger cranes. “As the market changed, cranes kept getting bigger,” says Urbanek. He explains that when he first joined the company in 1972, the largest crane manufactured was a 16-ton product. Now the largest is up to 40 tons. National also has become a leader in the design and manufacture of truck-mounted cranes, which enable construction companies to get to and from jobs more quickly than they would driving traditionally built cranes that roughly travel at much slower speeds.

Such new devices are part of the company’s overall mission to continually redesign and reinvest in its research and development department. Currently, about 2 to 3 percent of sales go back into the redesign of new products. National’s crane models undergo extensive life-cycle testing, receiving more punishment than most cranes will endure in their life span. Every structural part of the crane is put through a rigorous procedure in which some components are operated through 60,000 cycles at full-capacity load. More than 90 percent of National’s cranes are still in service after decades of use because of the way the company tests its products; factory prototypes are subjected to the toughest testing requirements in the industry. Each undergoes stress-coat and strain-gauge testing, a procedure that measures metal deformation as small as 1 millionth of an inch to ensure structural integrity.

It is National’s ongoing goal to continually reinvest and upgrade its existing line of products while creating exciting new designs. This proven concept is set to propel the company further in its design and assembly of new lines of versatile, rugged cranes for the 21st century.