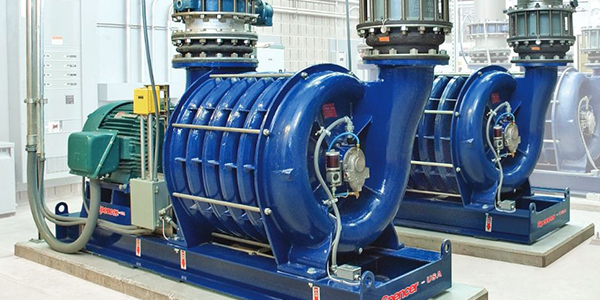 It’s not surprising that The Spencer Turbine Company has been around since 1892 given the enormous number of industries that need the centrifugal blowers and exhausters the company manufactures. Industrial, commercial, municipal, utility and governmental applications abound for Spencer products. In fact, Spencer has installed more than half a million centrifugal blowers and exhausters during its lifetime. “We supply everyone from ExxonMobil and Alcoa to mom & pop outfits,” says Richard A. Hart, Spencer’s vice president of sales. “All of these companies need our technology to move air and gas that results in a cleaner environment.”

Power Mizer® and Vortex®
Spencer’s marketing efforts also are helped by the fact that it produces the most efficient centrifugal blowers on the market in their performance range. Introduced in 1992, the Power Mizer® family of high efficiency cast centrifugal blowers for industrial process applications has set the standard in blowers. The air handling components of these blowers were designed in the world-class Spencer development laboratory. By avoiding abrupt velocity changes that create turbulence and waste energy, Spencer engineers achieved smoother, more efficient airflow from blower inlet to discharge. The blowers also perform at a peak adiabatic efficiency that’s above 80 percent. Moreover, Power Mizer blowers offer long-term power savings of tens of thousands of dollars per blower per year.

Power Mizer multi-stage centrifugal blowers provide high efficiency air delivery in heavy-duty industrial applications such as sulfur recovery, hazardous vapor control, soil remediation, debris removal, air separation and wastewater aeration, among others. In 2002, Spencer added to the Power Mizer family of blowers by unveiling the 3500 series. In addition to the 3500 series, the Power Mizer line consists of the 3000, 4000, 5000, 6000 and 7000 series. “The 3500 series has had a very successful introduction,” notes Hart. “The new Power Mizer series has been extraordinarily well received by the market.” Of all the products Spencer manufactures, Hart expects demand in the near future to be greatest for the Power Mizer family of products and their accompanying control components.

Another interesting product that has brought Spencer wide acclaim is the Vortex® blower. Vortex is a single-stage regenerative-style blower as opposed to a centrifugal-style blower. Spencer licensed production of the Vortex to a Japanese manufacturer and imported the blower to the United States for distribution. In 1994, Spencer cut an agreement with the Japanese company and Spencer has been manufacturing the product in the United States ever since. The 15hp blower’s compact design features TEFC or explosion-proof motors with quiet operation and stable airflow.

The Connecticut-based company has built a worldwide reputation as the one to contact for the most difficult applications possible, including the following: corrosive and toxic gases such as sulfides, halogens, acids, flue and stack gases, cyanides and ammonia; temperatures to 1100 degrees Fahrenheit; casing design pressures to 1000 PSIG; inlet pressures to 300 PSIG; differential pressures to 20 PSIG; and highly restrictive shaft sealing or gastight requirements.

The Full System Supplier
Spencer takes pride in its ability to offer full system supply capability from blowers and their controls to tubing, fitting, valves and other required components. Spencer is unique in its industry in that it manufactures its own control panels. “We engineer, design and manufacture every part of our system under one roof. We take responsibility for the entire system,” says Hart.

Spencer’s full system supply capability serves the company well as an increasing number of customers are looking to purchase pre-engineered, pre-built and pre-wired centrifugal blower and exhauster systems. The company builds and tests each one of its systems at its 200,000-square-foot facility in Windsor, Conn., before the system is shipped to a customer as one unit. By contrast, competitors can only supply what Hart calls “erector sets” that require customer assembly. “We try to make it as easy as possible for our customers,” says Hart.

During early 2002, Spencer expanded its control panel assembly capabilities. The company invested heavily in a new state-of-the-art facility that tripled the size of its assembly capabilities in this area. Spencer’s engineering and research capabilities are unparalleled in the industry. The Spencer development laboratory is one of the best-equipped and qualified facilities of its kind in the world. The lab is an especially valued resource for gas booster and special blower development because these applications are extremely challenging and difficult. In the lab, Spencer engineers make practical use of 110 years of accumulated knowledge in air and gas moving technology. Spencer engineers conduct many lab programs, such as applications evaluations, performance tests, product development, ASME code tests and volume measurements. The capabilities of the lab are available at any time to solve customers’ technical problems. Spencer has direct sales offices and manufacturers’ representatives across North America, and independent representatives in many countries across the globe. They comprise the industry’s largest representative organizations, ready to provide local liaison for customers during system planning, construction, installation, startup and operation.

Spencer applies the same full system supply philosophy to its vacuum cleaning systems. The company can ship the motor, motor starter, control panel, vacuum producer and collector tank all tested and mounted on one skit. With minimal effort on the part of the customer, the system is ready to go. “The only things the customer is left to do in order to get the system up and running is hook up the system to electrical power and pipe up the inlet system,” says Hart.

Growth in Wastewater Treatment
The wastewater treatment industry promises the most growth for Spencer in the near future. The industry’s needs in wastewater aeration will lead to an increase in demand for Spencer blowers and gas boosters. The company recently was awarded the largest municipal dollar contract in its 110-year history, valued at nearly $1 million. It calls for the provision of aeration equipment and controls technology to the City of Warwick, R.I., for its wastewater treatment facility. Power Mizer blowers, variable frequency drives, mechanical accessories, electrical control panels, dissolved oxygen control system instrumentation and components, and programmable logic controller logic for its equipment as well as for other components of the system all will be supplied as part of the project. In addition, Spencer has received an additional $1 million order for Missoula, Mont., for it wastewater technology.

Spencer has a long history of supplying the wastewater treatment industry. The company introduced its first sewage aeration blower in 1937. Industry in general has many reasons for going with Spencer products. “We are a worldwide supplier of centrifugal blower and exhauster systems with the ability to manufacture all component parts,” notes Hart. “We can also meet all of the documentation requirements demanded by large engineering contractors such as Mitsubishi and Bechtel. Finally, we have total engineering capabilities; in fact, we have a total of twenty design and application engineers on staff.”