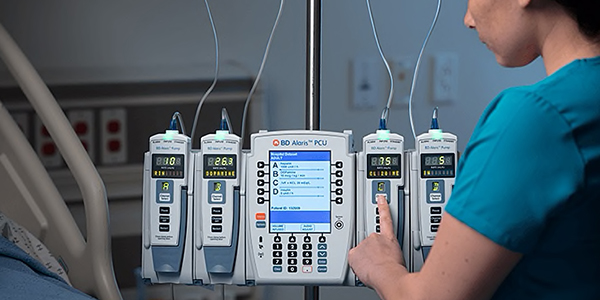 C.R. Bard, Inc. of Murray Hill, N.J., is one of the world’s top 10 manufacturers and suppliers of medical devices, with 108 worldwide facilities and 8,100 employees. The company strives toward customized solutions to the various challenges and issues that confront health-care providers around the world. Its more than 7,000 products and services support wellness, prevention, early diagnosis, treatment and post-treatment maintenance.

The firm was established in New York City in 1907 by Charles Russell Bard, and made its first impression through its development of the first balloon catheter, in cooperation with Dr. Frederick E.B. Foley. The Foley catheter gained quick acceptance by clinicians. Bard sold his enterprise in 1926 to John F. Willits and Edson L. Outwin for $18,000. It proved to be a sound investment for the new owners; by 1948, C.R. Bard had net sales exceeding $1 million and had moved to larger quarters in New Jersey.

Following a series of groundbreaking developments including the first arterial prosthesis and the first bipolar temporary-pacing catheter, C.R. Bard acquired USCI in 1966. In 1974, C.R. Bard went international by establishing manufacturing bases in South America and Japan. The 1980 purchase of Davol brought in a subsidiary that today is a market leader in hernia mesh products. Plants in Puerto Rico and Ireland followed in 1981.

Today, C.R. Bard has eight manufacturing facilities in the continental United States and others in Puerto Rico, Mexico, England, Germany, France and Malaysia. All of these locations are designed to support the firm’s strong global businesses and diverse product lines while meeting the unique needs of each market area. The company has established Focused Technology Centers for specific product lines at some of these locations. For example, its plant at Glen Falls, N.Y., includes a center of excellence for the manufacture of guide wires and woven catheters. Another, located at its Karlsruhe, Germany, plant, concentrates on metals production.

C.R. Bard’s corporate headquarters in Murray Hill is also the site of its Healthcare Services operations. The company also has nine other divisional home offices throughout the country and satellite command posts around the world, including 14 in Europe and one each in Australia and Japan.

Net sales increased 6 percent in 2000, to $1,098,800,000. C.R. Bard has initiated a program to shift funds from operations to reinvestment in the company to fuel long-term growth, especially through research and development.

Scheduled to be completed by the end of 2002, the plan includes a three-phase reduction in the number of manufacturing sites; an ongoing program to reduce the administrative costs of doing business internationally; and Project SOAR (Strategic Optimization and Relocation), which will increase operating efficiency by consolidating all U.S. non-manufacturing operations in New Jersey.

To Your Health
In a recent report of corporate strategies to stockholders, Chairman and Chief Executive Officer William H. Longfield said, “We strongly believe that new products are our lifeblood and we must increase our investment in research and product development.” C.R. Bard spent $53.2 million on research and development in 2000. The company conducts most of its research in conjunction with clinicians throughout the medical community. This collaboration ensures an appropriate and economically feasible supply of new products and services.

The Bard Mesh PerFix Plug has been used in many of the country’s 700,000 annual groin hernia repairs since 1993; the 1 millionth unit was sold in April 2000. The cone-shaped polypropylene device permits operations to be completed within 25 minutes, sometimes without general anesthesia. Patients become ambulatory in two hours and resume normal activities in an average of three days.

New to C.R. Bard’s oncology line is the EndoCinch Suturing System, which provides a surgical procedure for the treatment of gastroesophageal reflux disease (GERD) without an incision. About 15 million Americans suffer from GERD, which allows the flow of stomach acid into the esophagus and results in the highly discomforting sensation of heartburn and other symptoms.

The EndoCinch system involves the passage of a suturing device through an endoscope, allowing the surgeon to place a series of stitches in the lower esophagus. The resulting pleat helps prevent the flow of stomach acid into the esophagus.

The new Aviten Ultrafoam Collagen Hemostatic Sponge stops bleeding during surgical procedures by accelerating blood clot formation. It is the only collagen hemostatic sponge indicated for use in surgical applications including neurosurgery, the procedure that uses hemostats most frequently.

Seeds of Discovery
Through its acquisition of ProSeed, Inc., C.R. Bard is giving physicians and hospitals a turnkey approach to the latest breakthrough in the treatment of prostate cancer – brachytherapy seed implantation. The unique ProSeed Service includes state-of-the-art equipment, a comprehensive seed-management program and the training of urologists, radiation oncologists and hospital staffs in providing brachytherapy. The outpatient procedure is minimally invasive and usually allows the patient to return home the same day.

The recently introduced Site-Rite 3 Ultrasound System is a low-cost, user-friendly scanner designed to aid physicians in guiding needles for percutaneous vascular punctures and nerve blocks. The device obviates the need for anatomic landmarks to determine the location of the target vessel or nerve. By following the needles’ path, Site-Rite 3 saves time and reduces complications.

In 2001, the U.S. Food and Drug Administration approved two new C.R. Bard creations. The Bard Memotherm Endoscopic Biliary Stent is a minimally invasive option for the treatment of malignant biliary obstructions. The Stinger Sablation catheter has enhanced the treatment of cardiac arrhythmias by eliminating short circuits in the heart tissue. “The FDA approval underscores Bard’s overall leadership in the electrophysiology market,” Longfield said.

Another advance in the urology field is the Bardex I.C. Foley catheter. Its design includes a Bactiguard hydrogel/silver coating, which has proven successful in reducing urinary tract infections, increasing patient safety and comfort, and reducing the cost of treatment. “The Bardex I.C. product has changed the standard of care for catheterized patients,” says William Midgette, president of Bard’s Medical Division in Atlanta. “The system provides documented value in reducing the risk of hospital-acquired infections and their associated cost of treatment.”

The standard Foley catheter accounts for 40 percent of all hospital-acquired infections, Midgette says. The Bardex I.C. Foley catheters, introduced in 1995, are now used in more than 1,000 acute-care hospitals in the United States, and have been proven to reduce urinary infections by up to 47 percent, he adds. These catheters now account for 99 percent of all anti-infective urinary catheters marketed in this country.

Access to Leadership
The Bard Access Systems (BAS) Division, a wholly owned subsidiary, is a worldwide leader in providing medical devices for medium- to long-term vascular access to support patients who require chemotherapy, nutritional support, antibiotics and other drug therapies, and dialysis.

C.R. Bard’s vascular-access product lines include subcutaneous ports, chronic central venous access catheters, peripherally inserted central catheters (PICCs), short- and long-term dialysis catheters, and its portable ultrasound designed for vascular access, which avoids complications and quickly accesses the target vessel. The global market for medium- to long-term vascular-access devices is about $450 million and is growing at an estimated 5 to 8 percent a year. Over the years, BAS has grown faster than the market average through both strategic acquisitions and organic growth. The division has about 200 patents, an important factor in building its strong market leadership position.

Groshong slit-valved catheters, which eliminate the need for heparin to keep catheters from clotting, have truly created a paradigm shift in vascular access, says BAS President Amy Paul. BAS was the first to introduce a high-flow dialysis catheter that decreases patient time at the dialysis center. Paul says her division is also currently converting its entire line of PICCs over to safety introducers, which protect health-care professionals from accident needle sticks.

“Our value proposition is that we support our broad and deep range of products with superior educational programs, a high-quality focus, innovative technology and the desire of every BAS employee to earn the right to be our customer’s first choice,” Paul says.