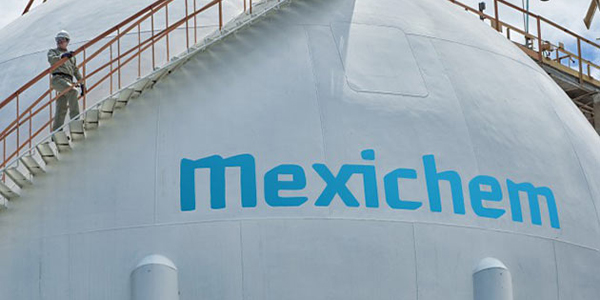 What do your toothpaste, your air condiitioning and your Teflon® pan have in common? Best place for answers is Mexichem, a group of Mexican chemical and petrochemical companies whose products cover industries as broad as construction, paper mills, toys, drinking water, pharmaceutical, automotive, personal and health care.

Mexichem is a 100 percent Mexican-owned world-class group, certified by global organizations, and part of chemical companies, leaders in their trade. With a team of more than 2,350 people, and three basic goals, innovation, technology, and leadership, the group is organized in two production chains: the vinyl-chlorine and the fluorine chains, supported by a distribution organization – Dermet de Mexico – that reaches multiple locations around the country.

The innovative profile of Mexichem has allowed the company to grow exponentially in the last decades, by expansion and by merger and acquisition of key players in the national and international arena. The group’s annual sales for the year 2005 reached $1.2 billion, and it exported to over 50 countries including the United States and Canada, Central and South America, Europe, Australia, Asia and Africa. Mexichem is presently operating with the highest efficiency, safety, health and environment protection standards resulting in a high growth and profitability potential.

THE CHLORINE AND FLUORINE CHAINS
The strategic focus and organizational culture of the new company was centered on the development of chlorine and fluorine chains. The chlorine chain works on the extraction of sodium chlorine brine to manufacture chlorine caustic soda, vinyl chloride, and polyvinylchloride (PVC). It operates the extraction at Union Minera del Sur, in Jaltipan, state of Veracruz from underground salt domes. Once the brine is extracted, it is sent to Cloro de Tehuantepec, located in Pajaritos Industrial Park in Coatzacoalcos, Veracruz, the second plant of its kind in Latin America, where 268,000 tons of chlorine and caustic soda and 61,300 tons of sodium hypochlorite are produced annually. Cloro de Tehuantepec is Petróleos Mexicanos’ (Pemex) main supplier of chloro-gas, the raw material needed in the manufacture of vinyl chloride, also known as chloroethene in IUPAC nomenclature, an important industrial chemical mainly used to produce its polymer, polyvinylchloride (PVC).
In addition, Pennwalt’s two plants located in the states of Mexico and Jalisco contribute an annual production of 70,000 tons of chlorine and caustic soda, over 200,000 tons of sodium hypochlorite, and 72,000 tons of hydrochloric acid.

Mexichem’s chlorine chain includes three industrial plants in Altamira, Tamaulipas; Tlaxcala; and Cuautitlan, in the state of México under the operation of Grupo Primex, a company that started operations in 1968. Primex also produces phthalic anhydride, which is used to make plasticizers used in the manufacture of PVC compounds; dioctyl phthalate, (DOP) and trioctyl trimellitate (TOTM), a primary plasticizer for polyvinyl chloride resin. Through Primex, the group has recently acquired Bayshore Group, located in Tennent, New Jersey, a major manufacturer of flexible compounds, virgin, rigid PVC compounds, and recycler of rigid PVC.

Mexichem Fluor, on the other hand, has two locations. San Luis Potosí is the largest worldwide producer of calcium fluoride, better known as fluorspar or fluorite, a naturally occurring, nonmetallic mineral used in the steel, cement, glass, and ceramics industries, primarily to save energy in the melting process. The Matamoros plant, in Tamaulipas, produces hydrogen fluoride anhydrous and hydrofluoric acid, primarily used in the manufacture of refrigerant gas used in air conditioners for homes, buildings, automobiles, trucks, and airplanes, as well as in refrigerators and freezers. It is used as a catalyst in the manufacture of gasoline and in the pickling of stainless steel, to manufacture nuclear fuels, integrated circuits, Teflon ®, and fluorinated salts such as lithium salts for batteries and sodium salts for toothpastes.

Mexichem Fluor San Luis Potosí exports its products to Canada, the United States, South America, Europe and Japan, among other countries. It produces 420,000 tons of metallurgic gravel, and 580,000 tons of acid grade concentrate per year. Due to its installed capacity, Mexichem Fluor Matamoros is the second largest plant in the world, producing 208 million pounds per year. It exports 98 percent of its production to the U.S.

USES OF FLUORSPAR
The essential function of fluorspar is as a flux used in the transfer process of thermal energy, an additive that reduces the temperature at which substances such as steel and glass melt, primarily to save energy in the production process.

Initially fluorite is mined by controlled explosions, and resulting rock is crushed and sorted until metallurgical gravel is obtained. In its naturally occurring state, fluorspar is classified as metallurgy grade and presented in fine, pea size, small size, granular, standard, special grades with 80 to 90 percent minimum calcium fluoride content.

Acid-grade fluorspar is a concentrated mineral from which some impurities have been removed. Acid grade provides calcium fluoride at 97 percent minimum content, and physical attributes of 20 percent larger than mesh 100 and 38 percent smaller than mesh 325. Acid grade concentrate is obtained through the flotation system; once processed, it is transported to the chemical plant in Matamoros to be used as raw material in obtaining hydrogen fluoride anhydrous and hydrofluoric acid, the basis for several products such as refrigeration gases, fluoropolymers, gasolines, metal surface cleaning, fluorinated salts, and electronic components preparation. It is also used in aluminum fluoride production, primary compound in metallic aluminum production.

However, what has spiraled sales recently at Mexichem Fluor is the development of an additive for cement. “We’ve developed a product that can be added to the mixture of oxides of calcium, silicon and aluminum. Cement is made by heating limestone with clay, a source of silicon and aluminum, and grinding the product with a source of sulfate. We add the product to this clinker before heating. The melting property of the fluoride additive mineralizes the mix and improves the silicon components. The result is a cement of improved quality that requires less “cooking” time,” said Héctor Fuentes Martín, General Director of Mexichem Fluor. Mexichem Fluor experienced an increase of over 200 percent in sales in the last year. Cement additives represented 20 percent of those sales.

Mexichem makes so many essential raw materials for use in the construction industry that it has become an inside saying: “At Mexichem, we are making chemistry the cornerstone of construction.”

THE INCEPTION
Mexichem Fluor was founded in 2004 to develop a product chain incorporating fluorite production. The group acquired Compañía Minera Las Cuevas, in San Luis Potosí and Química Fluor in the city of Matamoros to develop the next stage in production of hydrofluoric acid.

San Luis Potosí, a state located in the central part of the country, has in its geology the richest fluorite deposit in the world, which has been worked since 1957.

The Matamoros chemical plant located in the northern part of the country started operations during 1975, producing and selling hydrogen fluoride anhydrous and hydrofluoric acid. Today, its annual production exceeds 200 million pounds, exported mainly to the United States, and has become the second producing plant in the world. Ninety-eight percent of this production is for export, representing the company’s commitment to strengthen the country’s economy.

However, Mexichem Fluor’s main goal is to become the largest fluorite producer globally. “Part of our success is due to the fact that international prices have risen, and international competition has declined. China’s operations found difficulties to be financed and other countries such as South Africa, Brazil, Colombia, Spain, England and Germany are also producers but at a smaller scale,” said Valle Martin. “In order to become the largest fluorite producer in the world, we need to increase our mining and flotation capacity sustained with a highly mechanized structure, and develop a systematic and planned mining process of our large reserves.”

WHAT IS BEING DONE
Valle believes that in order to get stronger, Mexichem needs to continue with its high standards in process updating and employee training. Mexichem Fluor is the first mine and hydrogen fluoride anhydrous plant to receive its ISO: 9002 certification in order to support its aggressive sales strategy. In addition, it is vertically integrated in its main business lines, which contributes to its clients’ satisfaction.

As a group, Mexichem is also known for its social responsibility regarding safety in the workplace, health concerns and respect for the environment. The company fully complies with Mexican environmental and safety laws, and has followed the comprehensive responsibility program sponsored by the national chemical industry association, ANIQ. This association sets best-practice industry standards similar to the Responsible Care program developed in the United States.

Mexichem has Clean Industry and ISO: 14001 certifications and has worked to reduce the environmental impact of its operations and an efficient use of byproducts of the production process. The group has implemented new processes that benefit its operations economically by reducing special treatment of byproducts and residues, and increase their safe use in energy efficiency programs such as the one implement at the Tehuantepec plant in 2005.

SOCIAL RESPONSIBILITY
As a part of its culture, values, and daily activities, Mexichem has made a commitment to social responsibility. “We have developed assistance programs for the communities in which our manufacturing facilities are located. This way, we can better understand their developmental needs at an educational and social level, and as their primary source of employment,” Valle Martin said. The group has established agreements to develop partnerships and joint training programs with major universities in those regions.

Mexichem has also made a commitment to benefit underserved communities attending to their basic needs of food, clothing and housing. The group channels its monthly donations through the Fundación Kaluz A.C. This foundation directs donations to human development programs that include education, sports and cultural initiatives.

The chemical group also works through Fondo Unido, a philanthropic and social development organization founded in 1955 under the auspice of the American Society of Mexico, A.C. The institution approached Mexican corporations and the general public as part of its commitment to work as an independent institution, but it is affiliated to the United Way International Network. Mexichem employees work with Fondo Unido to create awareness campaigns, donate funds and determine funds destination according to the foundation guidelines. Employee participation and collections have increased expectations in benefiting communities and being part of solutions to the communities’ needs, said Fuentes. Fondo Unido has presence in 22 states of the republic.

SHOWING STRENGTH
In October of last year, Mexichem made a public offer for a primary and secondary stock sale. More than 1,000 national and international investors participated at the offering, acquiring 97.75 million stocks, 65 percent at a primary level. Over $135 million were collected to establish financing sources for a new growth platform of the group.

“The confidence the public showed in the future of the company encourages us to continue working. Despite 27 years of being a public company and part of the Mexican stock exchange, we still find strong support from investors because our products cover an ample and dynamic market sector in construction, housing, drinking water and other industries in Mexico as well as the United States and Latin America,” Valle concluded.