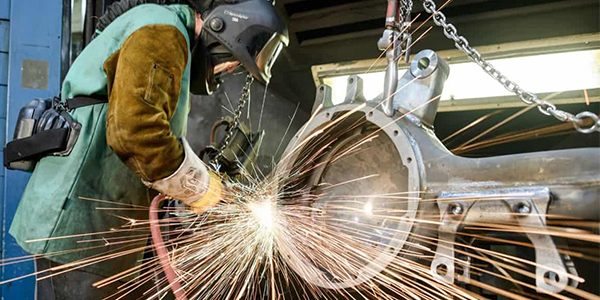 ArvinMeritor has much in common with the Greek god of mythology from which it takes half of its name: Meritor’s attributes were speed and agility. You could say that Arvin Meritor’s vehicle systems help customers attain both, in a safe, rugged and cost-effective way.

The company traces its history to 1913, when the horseless carriage proved no longer a myth but an enduring part of the American manufacturing culture. At this time, the production of truck axles began under Rockwell International, which grew into a $14 billion company by the 1980s that encompassed five divisions: aircraft, semiconductors, avionics, automotive. From 1913-1997 Rockwell International automotive operated with headquarters in Troy, Mich.; in 1997, a company to be named Meritor was spun off, eventually growing with sales of $3.5 billion by 1999. That year, Meritor merged with Columbus, Ind., Arvin, producer of the respected Gabriel(r) shock absorbers and Purolator(r) filters. Put together, ArvinMeritor since has grown into a $7 billion company.

It is in Troy, Mich., where ArvinMeritor bases its North American Specialty Products division, an automotive arm that is responsible for supplying a wide range of drive axles, braking systems, drivelines and ride control products, including independent wishbone-type suspension systems. In collaborative ventures with Italian and German companies, ArvinMeritor also produces electric drive axles for mid- and full-size buses. Markets include bus and coach; custom chassis, such as RVs; fire and emergency; utility/construction, and military applications.

The company has remained focused on meeting the drivetrain component needs of off-highway vehicle manufacturers as well as military, bus, fire and rescue and other specialized vehicle manufacturers, worldwide. With a goal to become “the number one supplier to the motor vehicle industry by 2010” ArvinMeritor has led the way in these areas through continuous improvement and a strong commitment in offering industry leading manufacturing, distribution and service strengths.

For bus and coach: Making the ride better
Transit bus and coach vehicles demand a wide variety of products that encompass the extremes of operating conditions, from urban stop-start city bus applications, to high-speed, long-distance coach operations. For more than 100 years, ArvinMeritor has been engineering and building components exclusively for transit bus applications. By collaborating with the manufacturers of these types of vehicles, ArvinMeritor ensures that its Meritor(r) brand transit bus and coach components are the most effective and appropriate in meeting customer design and performance needs.

The company recently introduced a complete range of axles designed specifically for low-floor city bus applications. These IPA (inverted portal axles) enable the internal passenger gangway floor to pass over the drive axle, allowing for a continuous, no-step low floor throughout the bus.

In addition, ArvinMeritor has just released a 71000 Series single reduction axle built specifically for the high start-and-stop duty cycles of the transit bus industry. The new axle, which carries a 28,660 pound gross axle weight rating, has been designed with several advanced features to meet the needs of today’s alternative-fuel and low-floor bus designs. The 71000 Series builds on the proven design of the industry-standard Meritor 61000 Series and offers a one-piece cast iron housing for extra strength and durability. Also standard is the more robust carrier, the R-177, which offers increased capacity while maintaining the same size.

The division also has developed new gearing for single reduction drive axles designed to provide smooth rolling and quiet operation for bus, coach and motor home applications. The gearing, called Quiet Ride(tm) uses state-of-the-art design, manufacturing and inspection equipment to provide a durable product while still offering a low-noise ride that is 7 to 9 dba quieter at the gear level. The gearing is manufactured at the company’s Newark, Ohio, facility and is available on all Meritor axles designed for full-size coaches and buses in North America, including the R-120, R-145 and R-160 series. This latest innovation builds on ArvinMeritor’s commitment to producing noise sensitive gearing for motor homes that began in 1995 using special gear tooth designs for low noise.

In the utility and construction area, ArvinMeritor is producing a new family of front drive steer axles for vehicles such as concrete cement mixers. These new axles, explains Burns, help to drive the truck from the front wheels and the back wheels for added traction.

New technology Propels the market
With 56 global facilities and 18 manufacturing plants in North America, ArvinMeritor has captured an audience that includes some of the most well known and respected vehicle producers on the market. Expectations are high that the company will continue to deliver on its promise to manufacture leading edge systems to help drive market growth.

That growth has been characterized as of late by a series of trends, notes Burns; among these, increasing weight requirements. “For every application we work with weights are growing,” says Burns. “Everyone wants to carry more cargo, or they want to put more passengers on the buses, and the weight on the axles and drive train continue to grow. If you’re hauling 35,000 versus 42,000 pounds of concrete, the difference is one truck less for every five trips.” China, he adds, and the potential for huge growth in the mass transportation market there, also presents potential for the company.

“We have a continuous process of product evolution, with leading edge, engineering design and development,” remarks Burns. “We undergo organic growth through new opportunities in new corners of the world, and we continue to be a leader in all the markets we serve.”

And as it continues at this pace, ArvinMeritor also will continuously upgrade and update its own manufacturing and distribution services to keep in step with a global market that swells in scope even as it breaks down borders that once seemed vastly unreachable.