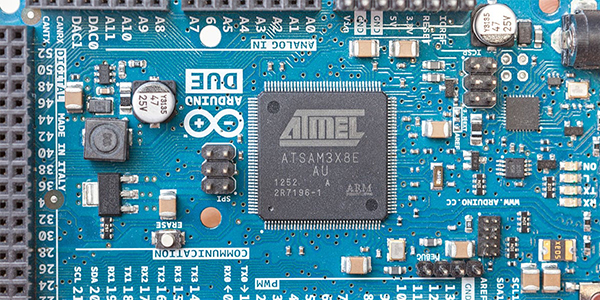 Airline passengers file calmly toward a departure gate where they each place their finger into a device that verifies their identity, instantaneously matching it to their flight ticket. A dashboard light flickers on, informing drivers that air in one of their tires is low, prompting them to pull into the next service station to inflate it and prevent a potentially dangerous blowout. Personal digital assistants (PDAs) are stolen around the world, but the information stored inside is kept secure because no one other than the owner of the PDA can activate it.

These scenarios might seem futuristic, but they are from the here and now, thanks to Atmel Corporation, a worldwide leader in the design and manufacture of a range of specialized chips that go into an array of electronic devices. Atmel’s focus is on embedded technology, which effectively involves computers that are built into myriad electronic devices – from phones to washing machines. These don’t look like your typical PC but are embedded as part of a board or a collection of chips, addressing a specific need or application.

Atmel was founded 20 years ago in San Jose, Calif., the heart of Silicon Valley by current President and CEO George Perlegos, a former Intel engineer who invented a class of memory chips that retain their data when power is cut. Atmel capitalized on the PC and Internet boom at the end of the last century, but where the company differs strategically from Intel and Motorola is in its creation of specialized flash memory-based microcontrollers for embedded computing.

Although semiconductors or microprocessors are commonly thought to reside at the core of personal computers, the truth is that PCs represent the proverbial tip of the chip iceberg. Director of Communications Clive Over said only 15 percent of the world’s microchip business supplies the general memory market, while 85 percent of microchip applications take place in what is known as the embedded market. “Our abilities in combining microcontrollers and memory allows us into a limitless number of applications,” said Over. “We are the only company that offers all the ingredients for complete system level integration. We have proven expertise in all the key technologies including microcontrollers, memory and advanced semiconductor processes to make both standard chips and ones built for nearly any application. Some of the key ones are consumer electronics and cell phones, automobile management systems, and electronic controllers for industrial assembly lines.”

A bit about the company
Atmel is a pioneer of nonvolatile memory technology (NVM), memory chips that retain content in the absence of power. Since NVM chips do not require power when off they are particularly well suited to small portable and battery-operated equipment. As a world leader in serial and parallel interface NVM, the company has had great success provisioning program and data storage requirements in the computing, automotive, telecommunications, consumer and military markets. It combines its long-established NVM leadership with more recent strengths in microcontrollers, the processor chips that are the brains of embedded computing designs. These allow tiny, single-chip, power stingy devices.

In these areas Atmel has made great strides. “We make microcontroller chips at various bit levels, but our sweet spot is with 8-bit applications, because our 8-bit architecture is the industry’s newest and averages 12 times faster or uses half the power of the original chip architecture developed by Intel,” says Over. Atmel’s enormously popular AVR(r) advanced 8-bit Reduced Instruction Set Computing (RISC) microcontroller family is the most rapidly adopted micro-controller ever, with more than 40,000 users (designers), he adds.

Atmel is committed to serving today’s ever-evolving electronics marketplace, especially throughout North America, Europe and Asia through its network of manufacturing, engineering, sales, technical support and distribution facilities in over 60 countries. Put more simply, customers turn to Atmel for the creation of new and enhanced electronic products that are smaller and less expensive yet offer more features than ever before. The list of popular product applications that rely on Atmel’s expertise includes PDAs, car security systems, GPS products, PCs, storage devices, DVD, digital cameras, entertainment consoles, games and toys.

Meanwhile in the communications marketplace, Atmel now supplies world leaders with integrated circuit (IC) solutions ranging from NVM Flash memory for cellular applications to complex components and chipsets for wireless voice and data-communication. The company’s growing family of baseband controllers and radio frequency components are targeted at both traditional and emerging markets. These include wireless LAN and Bluetooth(tm), high-bandwidth wireless interconnect technologies that are gaining rapid acceptance in networking and consumer applications. “By ensuring the timely introduction and continued support of our customers’ products, Atmel ICs are the very heart of the latest electronic products that help you accomplish more at work, enjoy greater convenience at home, and keep you connected wherever you go,” said Over. He added that for applications requiring superior processing capability while keeping power consumption to a minimum, Atmel offers a wide range of 32-bit microcontrollers based on the ARM(r) advanced RISC core. This series offers a variety of memory sizes and on-chip functionality in order to meet the precise requirements of many high-performance applications such as the booming popularity of disk-on-key storage devices.

Putting the “smart” in smart cards
The issue of increasing security for electronic applications remains key to the development of computing and communications equipment. Capitalizing on this trend, Atmel has developed a portfolio of security products, including secure microcontrollers and memory, contactless and biometric sensors. Atmel’s industry-leading ICs for secure Smart Cards and embedded security applications combines a tamper-resistant 8- or 32-bit microcontroller that embeds intelligence, high processing speed and user convenience.

Atmel’s Over adds that the company’s line-up of imaging products include sensors and processors that cover entry level to the highest resolution required for professional, medical and military applications. “When it comes to satisfying customer requirements with more complex image processors and industrial grade image sensors, Atmel’s ICs cover the very latest in innovative imaging technology, which can also be integrated into complete digital camera modules.”

Chip cashing
To comprehensively provide all the information necessary for all the applications in which Atmel chips are embedded, the company’s Web site contains more than 220,000 pages of data sheets. With nearly 9,000 professionals worldwide, including Atmel’s direct sales force and a network of representatives and distributors, Atmel’s revenue projections for this year are approaching $2 billion. “In 2004, we grew revenue by 24 percent and improved our gross margins five- and a-half points by achieving manufacturing efficiencies and by selling a richer product mix,” says CEO Perlegos. “It’s important noting our revenue growth for ’04 came from all of our business units. We believe our approach of applying our wide range of expertise in microcontrollers, memory and RF will serve us well for years to come.

By leveraging one of the industry’s broadest intellectual property technology portfolios, Atmel provides the electronics industry with systems design solutions that target an infinite array of applications within consumer, industrial, security, communications, computing and automotive markets. So when Atmel proclaims that its products are “Everywhere You Are” it’s not just a tagline – they can prove it.