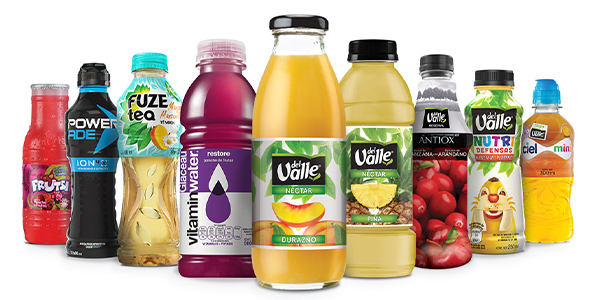 inding a niche market is a blessing when a company has the vision and the drive to take advantage of it. Jugos del Valle was founded in 1947 as a fruit juice manufacturing company, principally dedicated to grape juice. In 1965, the company was acquired by a new group of investors that built a new plant in Tepotzotlán, Mexico, current headquarters of Jugos del Valle. This new plant allowed the company to increase market share and diversify its production, developing a line of juices, nectars and fruit beverages. In 1978, Manuel Albarrán Macouzet, currently the president of the board and main stockholder, acquired 51 percent of the company in concurrence with a group of investors. H.J. Heinz purchased the remaining 49 percent. The company’s denomination changed to Jugos del Valle S.A. de C.V. In 1990, the Albarrán family acquired the company from H.J. Heinz, and went public in 1994.

Today, Grupo del Valle has 11 subsidiaries that produce, pack, sell and distribute juices, nectars, fruit beverages, pulp and concentrates, sodas and other food products to over 40 countries in the Americas, Europe, Africa, and Asia. Eighty percent of its production is consumed nationally while 20 percent is sold abroad.

IMPROVING OUTREACH
In order to rationalize production and distribution, Jugos del Valle has eight plants in the Mexican territory. From these locations, it sells to over 3,000 wholesale clients and distribution channels.

“We built presence throughout the nation, and facilitated weekly distribution to over 250,000 points of sale by spreading out our production plants,” said Manuel Albarrán Jr., international vice-president.

Forty percent of company’s sales go to large supermarket chains and convenience stores, third-party distributors and government, while the balance is distributed to retailers. “This is a characteristic of the Mexican market, where people still buy at the ‘mom and pop’ store around the corner. There are over 600,000 small stores in the country,” said Albarrán.
The company’s marketing strategy focuses on the development of a broad line of products to serve different market segments. Through innovative formulation and diversification, the company aggressively penetrates the market taking advantage of its products’ nutritional benefits. “Mexico is known for being a soda consumer market. However, the new ideas regarding health and well-being are making headway, and more people are turning to juices and fruit beverages,” said Albarrán.

He estimates the Mexican market for juice, nectars and fruit beverages to be $1 billion a year, still way behind the soda spending. Average consumption of juice per capita is 9 liters annually against 154 liters of soda. “The decision factor is still the price difference between fruit beverages and sodas, but we believe there is a tremendous potential for market growth of our products as people are changing their diet habits to healthier choices,”
said Albarrán. Jugos del Valle’s market participation rounds 32 percent, sharing the first place with competitor Jumex, followed by Lala and Boing.

The company’s plants cover 65,000 square meters and products are distributed in eight locations: Tepotzotlán, Zacatecas; Tijuana, Atzcapotzalco; Monterrey, Veracruz; Tepeji del Río, and Ensenada. It has a total installed capacity of over 200 million tons a year.

DELIGHTS AND HIGHLIGHTS
Main brand names Jugos del Valle produce and distribute in Mexico and abroad are Valle, Valle light, Tropyfrut, Minivalle, Florida7, Brisco and Valencia in the juices and nectars segment. In multi-flavor sodas, brand names are Barrilitos, Del Valle and Pep. In addition, the company manufactures tomato sauce Val-vita and Kul-Tai, a lactobacillus beverage.
Tropical fruits pulp and concentrates are processed and sold in metal or plastic drums for the national market and for export. “We employ aseptic packing technology in order to reduce cost in refrigeration of our products,” said Albarrán. The company produces aseptic pulp or frozen pulp in simple and concentrate forms.

For instance, mango pulp is offered from different sorts of mango such as Manila, Tommy, Kent, Haden, Keit and Gold. Concentration ranges between 13 and 42 percent, according to the fruit variety. Guaba, comes in China and Media China, with concentrates from 12 to 23 percent. Apple concentrate ranges from 12 to 32 percent, and is extracted from different varieties such as Winter Pearmain, Golden Delicious and Rome Beauty. Pineapple is processed as frozen juice, simple or concentrate. “Our pulp and concentrates taste and look like fresh fruit, and are free of foreign odors, ferments, and flavors,” said Albarrrán.
In addition, Jugos del Valle manufactures beverages with a variety of exotic fruit that target the Mexican consumer’s taste. Mixed flavors from fruits such as blackberries, maracuyá, coconut, tangerine, mango, carrot, tamarind, peach, grape, and pineapple also round out the product offering for children and young adults, the company’s main target markets.
In a sequence of strategic business decisions, Jugos del Valle has increased its operational reach as well as gained market participation. In 1992, the company acquired IAZ stock, a company that produced fruit juices and nectars, and processed pulp for Jugos del Valle.
At the end of 1995, the company acquired Salsas y Chiles Californianos S.A. de C.V. and the brand name Val-Vita, which specialized in tomato sauce. In 1997, it acquired Tropicana-México assets with two plants located in Guadalajara and Tijuana, and the right to use the Tropicana brand name for five years in Mexico.

In 2000, the company negotiated a strategic alliance with Kul-Tai, a producer of a lactobacillus beverage with great marketing potential. Kul-Tai specifically targets children between eight and 12 years of age. It is offered in different fruit flavors, and supports gastrointestinal healthy flora.

This process of product diversification and market consolidation was enhanced with commitment to creative packaging. “We are somewhat integrated in the packaging division, where we design and produce some of our containers,” said Albarrán. The company produces its own PET and PAD containers, and buys glass from Vitro Glass Containers, carton containers from Tetra Pak, and aluminum from several suppliers.

INTERNATIONAL EXPANSION
Two milestones in the international expansion of the company were the foundation of Valle-USA in December of 1996 to increase importation of products to North America, and the following year, the inception of Valle-Brazil to import and distribute products locally and to other countries in South America.

Later, the company would build a plant in the state of Sao Paulo, Brazil, initiating operations in October of 1999. “Opening the Brazilian plant was a tremendous driving force for our international expansion, and one of the most successful growth strategies we’ve achieved,” said Albarrán. Sucos del Valle sales in Brazil represent 60 percent of the company’s international sales and over 20 percent of the company’s revenues. The plant is producing at 70 percent of its installed capacity, which will bring new opportunities for expansion. The competitive edge of Sucos del Valle has surpassed top player Parmalat locally, achieving a market participation of 39 percent, and opened new possibilities for the company in the Mercosur territory.

In the United States, the market strategy is focused on following Mexican and Latin American immigrant patterns. “We rely on the idea of nostalgia; people who know the product from way back want to continue consuming it. Immigrants’ incomes increase while working in the United States, and there is a more developed culture for consumption of healthy and nutritional products, which is our strongest ally,” said Albarrán.

“But the Anglo consumer is also attracted to finding new flavors and exotic tastes in Jugos del Valle products,” he continued. With the idea of “trying something different,” the company has developed unusual products for the American taste. A functional drink, Blue Shot, with added vitamins and an energy buster, is included in this line. The company has commercial offices in Houston, Texas, distributors in Los Angeles, Calif. and Chicago, Ill. and a warehouse in Laredo, Texas.

In January of 2000, the company founded Jugos del Valle España, S.L. with the idea of importing and exporting products to the European Union, taking advantage of the existing free trade agreement.

“Our main focus of international development is now Brazil and the United Status, followed by other regions in South America, such as Venezuela and Peru, or Guatemala and El Salvador in Central America,” said Albarrán. Jugos del Valle has been awarded several times with a National Award in Exports at the level of major corporations, and several awards for quality of products and processing.

It is also based on the conviction that by offering healthful products to the international markets, it positions itself ahead of a paradigm transformation, which will bring positive change to Mexico and the world.