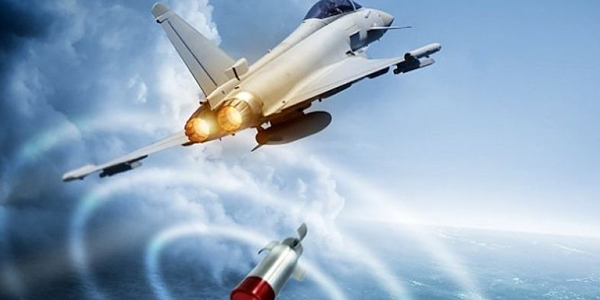 A fighter aircraft takes off to fly a sortie over Iraq. During the mission, a terrorist launches a shoulder-fired missile that locks on to the aircraft. The fighter jet’s missile warning system signals the alert and the aircraft dispenses an infrared (IR) decoy flare (or flares) whose heat signature fools the missile, seducing it away from the aircraft.

“It’s a fairly complex situation reduced to terms just that simple,” says Bill Heinsohn, president of Kilgore Flares Company of Toone, Tenn. “The pilot breathes a sigh of relief because he’s alive and can bring back a $60 million aircraft with help from a device that’s a very tiny fraction of that cost.”

Infrared decoys and radar-reflective chaff are proven military countermeasures that have saved lives and critical military equipment. Kilgore Flares Company’s expertise in pyrotechnics has greatly contributed to that end. The company has manufactured more than 14 million infrared flares in the past decade.

Originally founded in 1920 in Westerville, Ohio, the pyrotechnics maker became a leading supplier of illuminating and signal devices in World War II. The company moved to its current campus in 1960 while producing countermeasures for American forces in Vietnam. In February 2001, Kilgore Flares merged with U.K. parent Chemring Group PLC resulting in the largest supplier of infrared decoys in
the world.

“It’s a really good fit for us to be acquired by a company that can relate to the products that we manufacture,” Heinsohn says. “As a U.K.-based company they are certainly an ally and through the appropriate technology transfer agreements, we can exchange information and bring technologies from the U.K. to the U.S. and vice versa.”

Specifically, Britain stands to gain from the U.S. predominance in countermeasures for aircraft. Eighty percent of Kilgore Flares’ business is in aircraft systems. However, the U.K. rules the waves in terms of naval countermeasures.

“Our parent company has been involved in naval and sea-based systems and land-based systems over in the U.K., so the U.S. can benefit by bringing those technologies this way. We see these business elements as a real growth area and a complement to our predominant aircraft IRCM elements,” Heinsohn notes. During the war in Vietnam, Kilgore Flares was heavily “surged” with production ramped up to 20 hours per day, seven days per week. “Any time there is a threat to the United States, we provide to the government our full capacity,” says Don Health, operations director. “While we have ongoing contracts for peace-time needs, we can call a ‘surge’ to satisfy higher demand and make sure the country is protected.”

The company regularly conducts readiness exercises so it can respond immediately to defense inventory needs. Its 264-acre complex comprises more than 100 buildings including a chemical laboratory, wind tunnel, and environmental lab. In addition, testing facilities add another 242 acres for a state-of-the-art ballistics range; along with a medium-caliber test range and infrared flare launch test facility.

The Chemring Group has invested more than $20 million upgrading the manufacturing technology of Kilgore Flares in order to fully automate processes including pressing, extruding and forming through robotics, computer controls, precision measuring and binary tracking. The new, secure production facility makes Kilgore Flares the technology and safety leader in IR flare manufacturing. Production time has been cut from weeks to days. But even more important is the dramatic improvement in worker safety. In the past, workers were exposed to up to 200,000 pounds of powder daily. The computer-controlled facility and reengineered workstations virtually eliminate direct contact with material in its most sensitive state.

“Now the raw materials enter a facility and finished goods come out the other end. Operators sit behind a monitor and computer to interact with the process remotely,” Heinsohn says. “We set out to redefine how we make these devices so that today we’re the only plant in the world that is producing these items using this level
of automation.”

The Real Decoys
The countermeasures produced by Kilgore Flares fall into a number of categories and are used for many platforms. Countermeasures are ballistic, aerodynamic or self-propelled.

“When trying to defeat a missile, there are a couple of buzzwords,” Heinsohn instructs. “It can be done preemptively where you put out a decoy that is a continuous deployment and it confuses the missile before it has a chance to “lock-on” the target. There are also reactive countermeasures typically tied into missile warning systems on the aircraft.”

Kilgore Flares’ products are traditional, expendable countermeasures that are shot once and burn up. In typical aircraft decoy designs, the flare is ejected from a dispenser by igniting an impulse cartridge. The cartridge generates ejection pressure and ignition gases, which eject the flare and ignite a sequencer device. Once clear of the aircraft, the sequencer then ignites the flare. (Don’t ask exactly why the heat-seeking missile targets the flare and not the aircraft – that’s classified.)

When flares are dispensed from an aircraft during a jettison exercise, they can eerily resemble angelic wings encompassing the plane under their protection. It’s an appropriate symbol for the performance of these unique pyrotechnics, tailored to each aircraft ranging from the nimble F-16 and F/A-18 to transport planes.

The company’s biggest and latest accomplishment is working hand in hand with aerospace and electronics giant BAE Systems to develop the MJU-39B and MJU-40B. Kilgore Flares is the sole-source producer of these flares for BAE Systems and the F/A-22 Raptor.

The MJU-7A/B IR countermeasure flare provides standard decoy protection for aircraft such as the F-4, F-5, F-16 and F-104, as well as some transport or cargo aircraft. Other flares include the M206, a configuration for the A-10, C-130, and other smaller aircraft and helicopters.

“Generally speaking, the more heat and signature the (aircraft) puts out, the bigger the device has to be,” says Heinsohn.

“Whereas an F-15 has huge jet engines, other aircraft may have prop engines, giving off a different heat signature,” adds Marketing Director Ken Tuten. “Some aircraft combine multiple countermeasure technologies from various companies to protect against various threats.” Fortunately, the other countermeasures in these combinations often come from the Chemring Group; namely, in the U.S., Alloy Surfaces Inc. in Pennsylvania, Kilgore’s sister company.

Kilgore Flares also has contracts to build commercial IR decoys for U.S. allies, for example, the KC-001 is a 36mm round flare. The KC-002 series is a commercial one-inch by two-inch decoy flare variant. “The KC series of infrared decoys are designed for our allies who typically can’t, or chose not to, procure U.S. military items,” explains Heinsohn.

In addition to the U.S. Air Force flares mentioned, Kilgore Flares makes countermeasures for U.S. Navy and Marine specifications for the F/A-18, such as the MJU-38B. The MJU-32B flare is for helicopters and transport planes. Kilgore also developed the six-inch MJU-10/B decoy flare to prevent the downing of the high-powered F-15, as well as protecting the C-5, C-17 and other heavy transporters.

KC-25 Marks the Spot
Another business area is in marine location markers . The markers can be used from any boat and launched by hand or launcher. “Basically, it’s a floating marker that’s salt-water activated and produces a flame and smoke for approximately 15 or 40 minutes, depending on the device,” Tuten says of the company’s KC-25 and KC-58 Marine Location Markers. “You can use it for man overboard and rescue situations or to mark a target in the water.”

The company also makes ordnance products such as the primer assemblies for 120mm tank ammunition and 30mm ammunition flash tubes. Rounding out the business units of the company is a sideline in military avionics spare parts.

Future production may add more naval countermeasures, which can be two to five feet long. Much larger devices are required to safeguard a ship than an aircraft. Still another growth area is in land countermeasures to protect tanks and vehicles.

“On the advanced items, not the legacy items, we are involved in virtually every air IRCM (Infrared Countermeasure) development program area there is now,” Heinsohn says. Examples include protections for the two premier aircraft of the future – the F/A-22 and F-35 multi-role, joint strike fighter to replace the F-14, F-15, and F-16.

Of course, commercial airlines are also considering the necessity of countermeasures or decoy devices to protect travelers from terrorists in possession of portable, black market surface-to-air missile launchers.

“The debate rages on and it’s a real hot topic.” Heinsohn observes. “In the civilian world, they may get a little nervous about putting pyrotechnics on a commercial civilian airliner, so we’re certainly looking into those areas and understanding where our business might fit.” Recent developments do however show that expendables certainly could have a place in commercial aircraft protection.

Kilgore Flares, or Chemring CM devices, could ultimately be part of the solution crafted by Congress, the Department of Homeland Security, the FAA, commercial airlines and aerospace manufacturers. The company remains the unparalleled leader in development and production of air countermeasures that protect personnel and equipment in harm’s way.