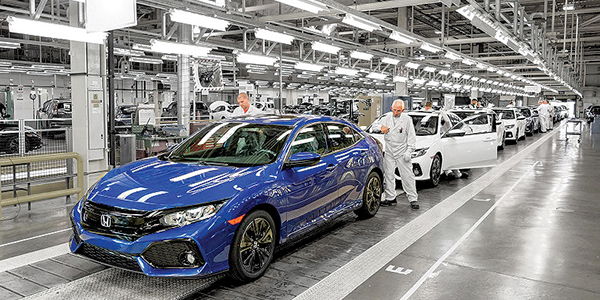 One of the fundamental advantages of a motor vehicle is its ability to physically connect people and places. For almost 25 years, Honda of America Manufacturing has made these connections a reality for millions of customers in North America and around the world through its cars, motorcycles and all-terrain vehicles (ATVs).

At the same time, Honda of America has helped its associates (employees) develop and strengthen their ties with local communities, especially through its associate-directed programs.

On the job or in the community, it is the “Honda Way” philosophy that has energized and enabled the results.

The Honda Way is an outgrowth of the beliefs of Soichiro Honda, who founded Honda Motor Co. in post-war Japan in 1948. The business plan was simple: attach surplus government motors to bicycle frames to give customers an affordable way to travel. But the idea for the company was a dream — bringing individuals together as a team to build products of the highest quality for customers around the world.

Says Sharon Van Winkle, administrative coordinator at Honda of America, “Mr. Honda believed in respect for the individual and each person’s skills, experience, creativity and ideas or dreams. He understood that by working together, people could realize their dreams. We call it the power of dreams.”

The nuts and bolts
One of Honda Motor Co.’s biggest dreams was Honda of America Manufacturing which began operations in 1979 at its new motorcycle plant near Marysville, Ohio. The original team had 64 associates and the first product was a CR250 motocross bike called the Elsinore.

The company made history by introducing innovative concepts to the American motor vehicle industry, such as integrated manufacturing, production teams, just-in-time parts delivery, and continuous improvement.

Today, Honda of America has four manufacturing plants and employs 13,400 associates. These facilities include:

These facilities represent a total capital investment of $4.86 billion. Honda’s suppliers include 461 raw materials and original equipment manufacturers, 158 raw materials and OEM suppliers in Ohio. OEM and raw materials purchases for 2002 production reached $7.6 billion. As one of Ohio’s leading exporters, in 2002 Honda of America shipped 25,385 automobiles to 44 countries; 14,457 motorcycles and ATVs to 48 countries; and $1.7 billion worth of parts and components.

Working with Honda of America in Ohio are branches of other Honda companies involved in product sales and distribution, R&D, production equipment development, and production of automatic transmissions, bringing Honda’s total employment in Ohio to more than 16,000.

Reaching beyond the walls
“From the beginning, we have recognized that a company can’t operate by itself; it is part of a community,” says Rene Hoy, assistant manager of community relations. “We appreciate the support we’ve received from the communities in which our plants are located and those in which our associates live. We regard our corporate philanthropy and our associate contribution programs as ways we can say thank you and give back to the community,” she says.

Associates play a large role in determining where corporate philanthropy funds are allocated through associate-directed programs: the Honda Hero Volunteer Program, United Way, and the Matching Gifts Program. Each of these programs is designed to extend the reach of Honda associates beyond the walls of their manufacturing facilities.

Volunteers are heroes
The Honda Hero Volunteer Program was created in 1995 to support associates’ involvement in community organizations. Active and retired associates and their spouses can participate. Currently, more than 1,700 Honda Heroes volunteer in food pantries scouting programs, youth sports programs, hospitals, museums, Habitat for Humanity and other not-for-profit organizations.

“Associates often take the skills they have developed on the job — like welding, using computers, team building or problem solving — and use them to help the organizations where they volunteer,” says Ginny Milburn, Company Communications Coordinator, who directs the program.

For example, Bruce Basford sets up and maintains computer software networks in Honda’s Product Engineering Department. When he joined the Honda Heroes program, he volunteered at Andrews House, a community center in his hometown of Delaware, Ohio. The Andrews House staff wanted to establish a computer center where people could learn how to use computers and access computer services. Basford went to work setting up a lab in their building, installing computer hardware and software, and providing other technical assistance.

Basford also applied for a $200 “Dollars for Doers” grant. The grants go to qualifying organizations in which Honda Heroes volunteer 50 hours of their time at a qualifying community organization within a 12-month period. Since the program began Honda has contributed over $450,000 to various organizations.

“The staff at Andrews House was very pleased. They welcomed the grant money, but more important they valued Bruce’s computer know-how. What was routine for Bruce made a big difference to them and the people they serve,” Milburn relates.

Beyond the county line
Honda of America began its United Way program in 1982, just three years after its start of the company. More than 440 associates donated $2,267 that went to Union County where the Marysville motorcycle and auto plants are located.

“Last year, our associates designated their contributions to 68 of Ohio’s 88 counties – approximately two-thirds of the state,” Hoy says. With Honda matching 50 cents on the dollar, last year’s contribution totaled $1.72 million. Since 1982, the company’s United Way contributions have totaled over $15 million to communities throughout the state.

Finally, Honda of America’s Matching Gifts Program allows associates to increase their giving to non-profit organizations involved with the art, culture and education. Associates who make a personal contribution to an organization in one of these areas will receive a match from Honda of 50 cents on the dollar. This program, begun in 1998, has distributed $23,000.

“It’s a good feeling when people tell us how much they love their Gold Wings or Accords,” summarizes Hoy. “In the same way, when leaders tell us how our volunteers and contributions have strengthened their organizations and improved their communities, we feel we have continued the Honda Way tradition. The dream goes on.”