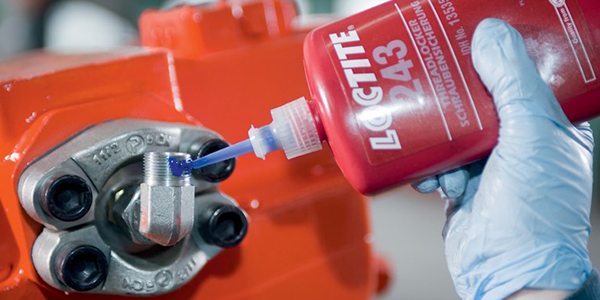 The products run the gamut from lubricants, to adhesives, to sealants – substances that make gears work more smoothly, screws hold on more tightly, and surfaces resist leaking more effectively – but the end user might be completely unaware of their presence. OEMs and first-tier companies are well aware of the branding, however: C5-A®, Fixmaster®, Nordbak®, Clover®, and, of course, Loctite® are in the everyday vocabularies of many of the men and women across the country who get things manufactured. Loctite products are pervasive. Because of them, other products are more reliable, less expensive to make, and longer lasting.

Professorial beginning
A chemistry professor at Hartford’s Trinity College, Dr. Vernon Krieble began Loctite in 1956, when he developed a cure inhibition system for a unique liquid bonding resin that hardened in the absence of air. This anaerobic sealant solved an apparently insoluble problem: keeping nuts and bolts tight in appliances and machines of various types. The substance bonded bolt to nut. It also launched the professor into a new life – professor to professional entrepreneur.

While the company took small steps during its infancy – sales hit the $7,000 mark during year one – the decade that followed saw remarkable growth. By 1964, sales had reached $2 million, while net income had increased from an initial year deficit to $220,000. By 1976, when the company was admitted to listing on the New York Stock Exchange, sales had quadrupled and then quadrupled again.

The Torch is Passed
Vernon Krieble died in 1964. His son Bob led the company through its changes until he retired in 1980. Kenneth Butterworth took the reins as president and CEO until 1995, although some of the responsibilities and titles were transferred to David Freeman during this time. By 1996, Freeman was president, CEO and board chairman. He was succeeded by Heinrich Grun in 1999.

The company today operates in 80 countries. It em- ploys over 4,000, and it manufactures and markets hundreds of specialty adhesives, sealants and coatings. Loctite has 40 direct subsidiaries, while the company itself is a subsidiary of Henkel KgaA, a German firm which acquired Loctite in 1997, when its sales were above $800 million.

Innovation is the Norm
For almost 50 years, Loctite has continued its innovative ways. In 1999, the company opened its new Rapid Response, Small Scale (R2S2) manufacturing facility, a totally unique resource dedicated to the rapid development of adhesive solutions for customers. Housed in the Rocky Hill, Conn., facility are both R&D and small-scale manufacturing. New adhesive formulations come directly from Loctite chemists to the R2S2 process labs and pilot plant where the manufacturing process is devised and implemented. Total production time for new adhesives, from initial formulation to delivery, does not exceed 45 days. This is remarkable, compared to the 18-month industry standard time to market for new adhesives.

Unique to electronic adhesive manufacturing and packaging is a 1,000-square-foot Class 10,000 clean room located in R2S2, where specific Loctite electronic adhesives are manufactured and packaged to ensure the purity of formulations with filler particles smaller than 13 microns. Manufacturing and packaging under Class 10,000 conditions guarantees the consistency, dispersion and size of fillers that are critical to the performance of microelectronics adhesives.

Other innovations that came to fruition in 1999 testify to the continuing outside-the-box thinking on the part of Loctite. The company introduced more than 300 new products last year, including several revolutionary adhesive technologies invented and patented by Loctite, such as new UV curing cyanoacrylates, FLASHCURE™, designed to offer instant fixtures and tack-free surfaces in less than five seconds when exposed to UV light.

Customer Service/Partnerships
Product development is not the only measure of quality. Loctite service has under-gone some changes over the years and has become a state-of-the-art standard in the industry. The company has earned QS9000 certification and ISO 9002 registration, and has won recognition for superior quality systems from numerous customer companies.

An example of high-tech service, the company’s Web site, www.loctite.com, is designed to be an easy-to-use, 24/7 resource that helps customers shorten their design cycle by getting instant information on the depth of Loctite technology right from their desktop. Visitors to the web site gain access to a wide array of information, ranging from company news, to application assistance. Organized into specific market categories, the web site provides news and information on OEM assembly, medical, automotive, electronic and MRO applications. The Web site offers an electronic catalog that features the company’s complete line of more than 1,400 products, and is tied into electronic data sheets featuring technical and health/safety information, an interactive product selector guide and a distributor locator to make purchasing quick and easy.

In the near future, the site will truly become “information central,” by presenting many new interactive features and additional high-quality information to aid engineers in decision making. Customers will be able to examine a product’s physical characteristics, review case histories and testimonials as idea generators and leave the site with product recommendations for testing their particular application. They will be able to contact their local sales rep, distributor or Loctite engineer through e-mail, schedule parts testing in Loctite laboratories, arrange for samples for testing and evaluation and sign up for customer training schools.

An extranet is also planned for customers who need simple information like order status, inventory levels, batch and shipping information. The extranet will allow customers to access their password-protected information any time of day, any day of the week – an ideal system for customers located all over the world.

Loctite also runs customer training classes that cover a plethora of subjects. Information is imparted on medical-device assembly applications, the use of adhesives in electric motors, sealing systems for mechanical assemblies, and bonding technologies for plastics, rubber and metal assemblies, just to name a few.

The total picture – product, training, partnering – is evidence of the quality and thoroughness that pervades Loctite Corporation. It is likely that the traits that brought so much success already will continue into the 21st century.