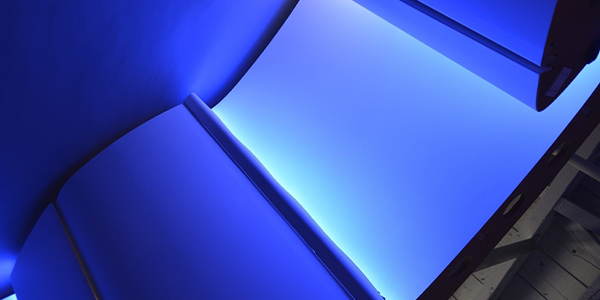 Problem: Nearly 30 percent of the electric energy used in U.S. commercial buildings is for lighting. Energy-efficient lighting systems can reduce energy consumption and save money, and those savings can be significant. But high first-costs of technologies such as dimming products, along with problems and doubts about automatic controls are slowing the adoption of energy-saving lighting systems.

Solution: A new technology developed at the Lighting Research Center (LRC) in Troy, N.Y., may change that. The “load-shed ballast” allows companies and utilities to dim fluorescent lighting gradually during times of peak electricity demand, such as hot summer days. The new device responds to signals from the utility, so a company can keep working while avoiding power shortages or paying sky-high prices for electricity used during peak times. The load-shed ballast is just one result of a three-year project at the LRC, part of Rensselaer Polytechnic Institute, America’s oldest engineering university.

With support from the U.S. Department of Energy, New York State Energy Research and Development Authority (NYSERDA), California Energy Commission, and Connecticut Light and Power, the LRC explored solutions to barriers associated with using lighting controls in commercial and industrial buildings. Researchers focused on technological issues with dimming controls, photosensors, and occupancy sensors, including lamp and ballast compatibility, dimming’s effect on lamp life, and installation and commissioning problems. The LRC also examined ways to move new technologies into the marketplace.

Moral: Whether a factory owner, or office worker, or small child, we rely on light and the lighting that creates it. Good lighting saves money, increases productivity, enhances comfort and safety, avoids power outages, reduces pollution, boosts the economy; helps us stay awake, increases independence, and guides drivers. Lighting does all that and more, and now industry and researchers are teaming up to further harness that power.

Here comes the sun
Saving energy can sometimes be as simple as turning off the lights, but you may not be able to see well enough to do your work. Some businesses such as TomoTherapy, Inc. are bringing the power of the sun indoors. TomoTherapy, a medical technology firm, leases its headquarters in Madison, Wis., from The Gialamas Company, which incorporates daylighting into about 75 percent of its buildings. The three-story building features large, tinted, “low-e” windows. Open office spaces also use fluorescent fixtures equipped with dimming ballasts that respond to daylight levels and adjust the electric lighting accordingly.
TomoTherapy is one of three facilities featured in recent case studies published by the Daylight Dividends program, a national effort to educate and provide evidence, guidance, and perspectives supporting the use of daylighting in commercial and educational buildings. Daylight Dividends sponsors include the California Energy Commission, Connecticut Light and Power Company, Iowa Energy Center, NYSERDA, North Carolina Daylighting Consortium, Northwest Energy Efficiency Alliance, and the U.S. Department of Energy.

Not just for seeing Besides its obvious effects on our visual system, light also affects the body’s circadian system, which regulates our sleep-wake cycle. It can affect productivity and mood, most obvious during a worker’s night shift when the body wants to sleep, but the job requires high performance. Some epidemiological studies suggest an association between night-shift work and a greater incidence of breast cancer in women. This may be due to light’s effect on the hormone melatonin, normally produced at night. “It’s true that light exposure at night can suppress melatonin,” explains Mariana Figueiro, Ph.D., head of the LRC’s Light and Health program, “but no one has shown a direct link between light at night and increased incidence of breast cancer.”

Some studies have shown that cycled light, rather than steady light levels, leads to greater weight gain and earlier hospital discharge of premature infants. Shorter (bluer) wavelengths affect the circadian system more than others. LRC researchers are testing blue LED (light-emitting diode) “light boxes,” and preliminary results show that the body responds well to blue light. Blue LEDs, for example, can be tuned to that ideal wavelength and are more efficient than traditional light boxes, which have to emit much more light to do the same job.

But LEDs can also do a lot more. Around for years as indicator devices, white-light LEDs along with new techniques for mixing red, green, and blue (RGB) LEDs to produce white light, show great promise for illumination applications. Industry and government have teamed up with the LRC to kick-start the adoption of LED technology by original equipment manufacturers (OEMs) and lighting specifiers.

One example of the many potential uses for LEDs is in commercial freezer cases. These typically use fluorescent lights, which don’t emit as much light or last as long as they would without the freezing conditions. This means higher energy and maintenance costs. LEDs, on the other hand, emit as much light in a freezer as they do at room temperature. LED-equipped freezer cases are not yet on the market, but in a study funded by NYSERDA, the LRC installed LEDs in an Albany, N.Y., area supermarket’s freezer case. The LRC compared LEDs and standard fluorescent lighting for performance, energy savings, shopper preferences (90 percent of shoppers preferred the LED case), and product sales. Working with the LRC are GE’s GELcore, the Golub Corporation (Price Chopper supermarkets), and Tyler Refrigeration (a division of Carrier Corp.).

Among its many LED-based projects, the LRC is also working with Boeing to develop innovative and efficient lighting solutions for use aboard commercial aircraft. The LRC and Boeing will collaborate on projects to evaluate current aircraft interior lighting designs and to specify new lighting concepts and requirements. Boeing’s commitment to the LRC Partners Program also provides sustaining support to the LRC’s core mission of “advancing the effective use of light for society and the environment.”

On the road
The power of light is not limited to buildings. Vehicles now are using more sophisticated headlamps and signals. The LRC’s Transportation Lighting program is working on the “headlamps of tomorrow,”

a collaboration with government and industry to produce better lighting for drivers. The Transportation Lighting Alliance (TLA), a group of vehicle lighting manufacturers, government agencies, and the LRC, is conducting cooperative research and education on how vehicle lighting, street lighting, and signage work together. TLA members include Daimler Chrysler, General Electric, Hella, OSRAM SYLVANIA, Philips, and Visteon.

Lighting technologies will continue to change as lighting research advances. Industries that make and use good lighting will benefit from the growing awareness that light has a profound effect on our lives.