But he’ll also tell you the company’s track record, how old it is (87 years) and how Kohler’s been around to witness a few things and invent a few handy devices over the years. He’ll tell you about Admiral Richard Byrd’s expedition to the South Pole in the 1920s and how he wouldn’t have made it without his Kohler power generator, a box of wires and switches that became the admiral’s only source of heat and light. He might also tell you about Baptist Hospital in Nashville, Tenn., and how Kohler’s emergency standby power helped to keep emergency systems online after a tornado ripped through the medical campus on April 16, 1998.

The story of Kohler can also be told in the story of the Midwest and how the people who moved there would need electrical generators and plumbing from a company that’s only claim to fame, back then, revolved around farm implements and an iron tub made for horses and pigs. That tub was soon adapted as the bathtub and its users eventually would need the pipes and fixtures – plumbing, as it came to be called – that Kohler manufactured.

In Hog Heaven And Beyond
Founded by Herbert Kohler, Kohler Co. originally manufactured farm implements, including the horse trough/ hog scalder that, after a long, hard stare, people realized would make a good bathtub. “That was because it was made of cast iron and enamel coated,” says Zolan, director of marketing.. “That’s how Kohler got into the plumbing business.” Currently, Kohler’s long arm extends far from its base in Wisconsin: The $2.3 billion company serves residential, commercial and industrial markets throughout the United States as well as overseas. How has it endured? Perhaps the key lies in the Kohler motto: “He who toils here hath set his mark.”

The Power Behind Power Generation
Kohler’s main thrust is in the power generation market where it fills a variety of needs for residential, commercial and industrial facilities. It also provides mobile generator units for recreation vehicles, utility trucks, emergency vehicles, bookmobiles and MRI trucks for hospitals as well as boats and pleasure craft. “Kohler is the world leader in providing generator sets for pleasure craft,” Zolan says. “We also provide small units for residential and commercial markets, including small businesses, convenience stores and residential, usually where people want to maintain power for security systems and sump-pumps.”

With mounting fears of Y2K power outages, Kohler also has seen a strong rise in sales in the commercial and residential markets of auxiliary power generators. “People are afraid and want to be able to supply their own power,” says Zolan. “That’s fine, but there’s other reasons for the necessity of back up power. There are also the occasional brown outs and black outs caused by storms. People should have backup power for that too.”

For both residential and commercial markets, Kohler has developed four generator models offering varying ranges of power, from eight-and a-half to 22 kilowatts, with 100-200 amp transfer switches. Generators produced for the industrial market are similar, except the range in power is greater, from 20 to 2,000 kilowatts.

Regulating Deregulation
Here, in the industrial end of Kohler’s business, the market is quickly evolving to suggest more reasons for on-site power generation and the biggest reason lies in the impending deregulation of the electrical industry, Zolan explains.

“There are more options available as energy service companies try to get the electric power business away from monopolies,” he says. “A lot of utilities are running short on capacity, which brings demand side management into play.”

Demand side management, he says, occurs when a utility is running short on power. To reduce the demand on the system customers install generators in exchange for preferential rates. Kohler, for example, maintains four generator sets that can be fired up to run its factory; in return, the utility gives the company a favorable electricity rate. “This helps the utility, which is often more concerned with having the capacity to serve air conditioning peaks in the summer,” Zolan explains. “They need to make sure their system doesn’t break down.”

The down side is the demand charge to some customers, whereby the utility assesses the company’s basic need as X. If the company uses more, the utility will charge accordingly. “Utilities use this as a way to ensure people don’t draw too much power,” Zolan says. Kohler, he adds, will install generator sets to monitor the load; when it gets to a level to where the customer could incur a demand charge, the auxiliary generator can be activated. Kohler also manufactures paralleling switch gear to bring into sync the utility and the generator; the company builds switches that handle up to 4,000 amps. “Our pro- ducts can also distribute power remotely,” says Zolan.

The test of Kohler’s reliability is in the number of markets that use a Kohler generator. Recently, the company signed an exclusive $87 million contract with the Federal Aviation Commission to supply generators and transfer switches to major airports throughout the United States. In other areas Kohler keeps a strong presence. Its engine division, with plants in Wisconsin and Mississippi, is a large revenue producing arm of the Kohler megalopolis. This division manufac-tures roughly 600,000 units a year and recently has begun a transition into 4-cylinder engines. The power density is similar to 2-cycle, Zolan says, but the four-cylinder advantage is four-fold: it’s more economic in terms of fuel use, environmentally friendly, electronically controlled and state-of-the-art.

Kohler also maintains two facilities in Wisconsin that supply power generation units, plus a host of distributorships and branches throughout the United States, Africa and Europe. In 1996 Kohler opened an assembly facility in Singapore to serve the Asian market.

An Octopus of Ingenuity
The Kohler empire also includes a kitchen and bath group, Kohler Plumbing North America, Cabinetry and Tile, Sterling Plumbing, International Plumbing, Interiors Group and the Hospitality and Real Estate Group, which operates the only Five-Diamond rated resort in the Midwest. But when you think Kohler you think plumbing, power generators and engines. Says Purchasing Manager Steve Solymossy, the company’s staying power in the face of dramatic change in both domestic and global marketplaces revolves around its ability to provide a total solution. “We keep pace by providing a complete service. We are not known as only a supplier of generator sets. We’re known as a provider of a complete power system solution.” 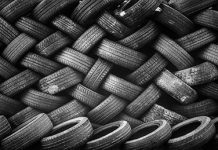 Why Tires Should be Recycled

Why Tires Should be Recycled