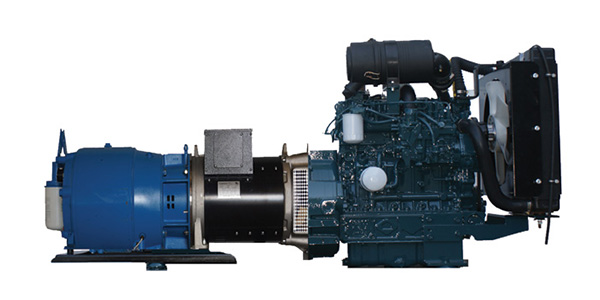 When Gino Kennedy left Canada in 1990 to set up the Florida distributorship for Kubota diesel engines, little did he know that his entrepreneurial energy would transport him from that position to the marine power supply market and then to the truck power accessory industry. President of Next Generation Power Engineering, Inc., since starting the company in 1997, Kennedy shows no signs of slowing his quest to generate mobile power efficiently. “We specialize in packaging small AC and DC power systems for specialty markets,” Kennedy says.

Operating out of 7,500 square feet of space in Jacksonville, Fla., Next Generation produces standard auxiliary power generators and ultracompact diesel gensets. Belt-driven with a Goodyear helical offset tooth drive at a midlevel speed, these are the smallest and lightest commercially available gensets on the market. Gensets have no unnecessary electronic components or computers, so they are particularly suited to the mobile, sometimes harsh, environments on boats, trucks and recreational vehicles.

In the past year, the business of providing gensets for large tractor-trailers has been overtaking the capabilities of Next Generation’s current facilities. To meet the growing demand, Kennedy has launched another company called TruckGen Inc. The company is expected to double its current staff of 10, along with adding manufacturing space at a second location.

Describing the quality of the genset product line, Kennedy states, “We sell a package containing top-shelf components — engines from top manufacturers and other components from top producers.” A review of the specifications on gensets developed for the marine market shows the results of packaging brand-name equipment:

To ensure safety, Next Generation offers an ignition protection-certified option on its 3.5-kilowatt and 5.5-kilowatt ultracompact gensets. These units comply with all U.S. Coast Guard standards. This certification allows the use of a safe and reliable diesel generator on a gasoline vessel, one that will not ignite explosive fumes such as gasoline vapors.

Part of the Truck Team

The genesis of truck-generator products — and now of TruckGen Inc. — began with the demand from owners and operators of large trucks who wanted a source of auxiliary power for their vehicles. Their need was rooted in the increasing costs of diesel fuel and the anti-idling laws in approximately 15 states and in some parts of Canada.

Idling the engine in a tractor-trailer is a common practice that can cost up to $5,000 in fuel annually, plus wear and tear on the engine. Kennedy says, “Diesel prices are up to about $1.80 per gallon and when truckers idle their engines, they are wasting a lot of fuel. In the winter, they idle to keep their sleepers and the engine warm. In the summer, they idle to keep the air conditioning running at night. No one was prepared for the spike in prices, so truckers are being hit hard with the costs.”

After attending a major truck show in Louisville, Ky., Kennedy determined that there was a definite need for small generators on trucks. He set about repackaging the ultracompact gensets for the truck market, paying special attention to size and weight because truckers are fined for excess axle weights.

Next Generation introduced the TruckGen products in 2000. A TruckGen genset consists of a small diesel engine driving a 60-hertz, 120-volt generator and a 12-volt battery-charging alternator. Two models, UCT 1-3.5 and UCT 2-5.5, are currently marketed for trucks. Available in 3.5-kilowatt and 5.5-kilowatt configurations, the units are designed to run electrically driven air conditioners and heaters, and all of a truck’s onboard 120-volt appliances and equipment. These products are made with the company’s heavy-duty marine components so they will withstand the rigors of the road.

Describing the installation as cost-effective, Kennedy says the genset is usually bolted to the truck frame in an enclosure that looks like an aluminum diamond-plate toolbox. The units also fit in truck step boxes or mount behind the cab. The step-box installation is becoming increasingly popular because no extra frame rail space is required, and the unit is cleverly hidden. A unit weighs 160 to 300 pounds and can be purchased with its own mounted radiator or a remote fan/radiator, if required. A qualified mechanic can do the installation in six to eight hours.

Kennedy says that some models installed last year have already logged 3,000 hours of use. As to the fuel savings, he asserts that idling a 600-horsepower engine uses 1.5 gallons of fuel per hour, while a genset-equipped truck will use only 0.1 gallon of fuel per hour.

Kennedy’s plans for TruckGen are to increase the volume and variety of these auxiliary power solutions. Patents are pending on two more models that will attach the generator to the set’s oil pan. He has also formed an alliance with a Texas manufacturer, with 500,000 square feet of manufacturing space, to augment TruckGen’s capabilities by assembling small generators to meet the growing demand for large truck fleets and OEM truck manufacturers.

Assessing the market, Kennedy says, “There are 2 million trucks on the road and 500,000 that idle every day. There are as many as 150,000 trucks being built every year. Our product can fit on every single one. Size and weight inhibit others. So, the potential market is as large as 30,000 to 50,000 units a year.” More power to them.