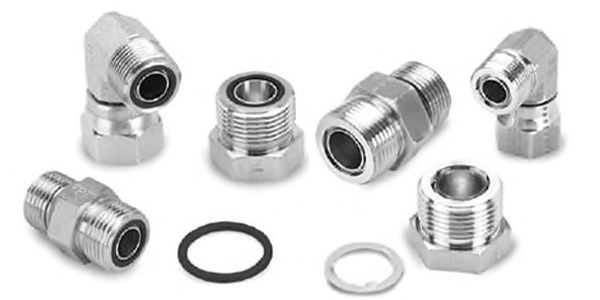 When you think of industrial tubing, it conjures up images of 20th century heavy industrial manufacturing for brakes and other hydraulics. You probably don’t think of fuel cells, the state-of-the-art technology that will hopefully provide an alternative to fossil fuels in the 21st century.

But the tubing division of Parker Hannifin Corp., the global leader in valves, seals and other tubing products for more than eight decades, is in fact on the cutting edge of fuel cell technology, developing a new line of corrugated stainless steel flexible hose that can withstand the temperature extremes of the market.

“It’s a new emerging technology where we’ve got a lot of new products and we’re taking the concept of our flange machine and finding ways to flange stainless steel corrugated products,” said Dave Perorazio, the general manager of the Parker Hannifin tube fitting division. “Plug Power is one of the companies that is using our technology for the marketplace.”

The stainless steel tubing will help Rhode Island-based Vectrix Corp. to launch its first fuel cell hybrid electric motor scooter that it plans to introduce in February 2006. The 16 kW electric scooter, developed in conjunction with Parker Hannifin, builds off the benefits of a gasoline-powered scooter, providing an emission-free vehicle that features an ultra-quiet electric motor.

Powering Lindbergh
The Ohio-based tube fitting division of Parker Hannifin, a global giant in industrial products and aerospace, services a wide range of industries, with a heavy emphasis on construction machinery and lawn-care equipment, as well as the whole gamut from automobiles to airplanes.

Although Parker Hannifin is now a highly diversified company, the tube fitting unit is at the very heart of the company that was founded back in 1918, when engineer/entrepreneur Arthur L. Parker started a business called Parker Appliances to make braking systems for trucks. The company became well-known in 1927 when aviator Charles Lindbergh specified Parker reliable, high pressure connections for the Spirit of St. Louis’ historic first Atlantic crossing.

Early in the company’s history, Parker Hannifin developed the 37-degree flare fitting, an industry standard for tube connections that has lasted to this very day. The success of this tube-fitting product allowed Parker Hannifin to become a leader in the airplane industry, with its many hydraulic products, as well as the machine tooling industries that flourished in America in the mid-20th Century.

Today, the global operations of Parker Hannifin – which brings in roughly $6 billion in annual revenues – employ roughly 55,000 people in 44 countries around the world, although Perorazio did not provide a breakdown of how many of those work specifically in the area of tube fitting. The division is the world’s leading producer of tube fittings, rubber and thermoplastic hose and fittings, brass fittings and valves, quick-connect couplings and assembly tools.

In addition to the headquarters of the unit in Columbus, Ohio, the tube fittings division has production facilities around the Dayton area in the communities of Eaton,. Lewisburg, and Brookville. In the mid-1990s, the unit also opened a plant in Mexico.

“We continue to expand our product line for our current customers,” Perorazio said. “The biggest market that we serve is the construction and moving equipment industries, the Caterpillars, the John Deeres, the Case-New Hollands, and the Genie Industries, and we also service the lawn care industry.” Parker Hannifin engineers have mastered the art of O-rings and other tube fittings that are able to withstand the high rate of vibrations from those devices.

The U.S. is still leader
“Any type of construction equipment, such as big cranes or earth-moving equipment, has grown at an astounding rate for us – some 30 to 40 percent,” Perorazio said. Ironically, the boom in overseas economic development has aided Parker Hannifin on several different levels. A lot of the construction machinery that the division supplies is sent abroad to developing nations, while here in the United States the growth of imports has meant new business in ports.

“We came off the recession some two-and-half to three years ago now, and we’ve been rushing to fill the pipeline,” Perorazio said. “The U.S. is still the leader in a lot of construction equipment that is used to grow any kind of economy.” To drive home its success in marketing tube fittings overseas, Parker Hannifin recently introduced a line of connections that use metric measurements of the type that dominate with the European market.

Parker Hannifin engineers are constantly working on ways to improve the core products. In 2004, the division also launched the Trap-Seal(tm), a trapezoidal-shaped O-ring that provides improved seal reliability by virtually eliminating the possibility of the O-ring popping out of the O-ring face seal groove.

One reason that Parker Hannifin has been able to keep its advantage in the marketplace is its Parflange technology. Designed to flange (90 degrees) and flare (37 degrees) tube specifically for assembly with Parker Seal-LokTM and Triple-Lok(r) tube fittings, the Parker Hannifin equipment can flange or flare hydraulic tube up to one- and- a- half inches in diameter in a matter of seconds. “That’s what allows people out in the field to make that equipment so quickly,” Perorazio explained.

Perorazio said that another recent innovation is a new method for installing screen fittings within connections, which are able to filter out small particles that otherwise could interfere with fluid dynamics. “These fine particles have the potential to shut down a whole system, so that’s another fail safe in the system,” he said.

Like most industrial companies, Parker Hannifin has been responding to the specter of foreign competition both with a push for lean manufacturing and other productivity improvements, and by a focus on working with its customers to create highly-engineered, custom-built projects that are beyond the capabilities of labor-intensive mass production plants abroad.

The company is also emphasizing the types of service that its competitors cannot match. For example, Perorazio said the company is offering a concept called the Parker Store which functions as a kind of retail center for hydraulics customers that need solutions in a hurry.

Indeed, one could say that Parker Hannifin specializes in making its products fit, whether you’re talking about hydraulic tubes or the complex marketplace of the 21st century.