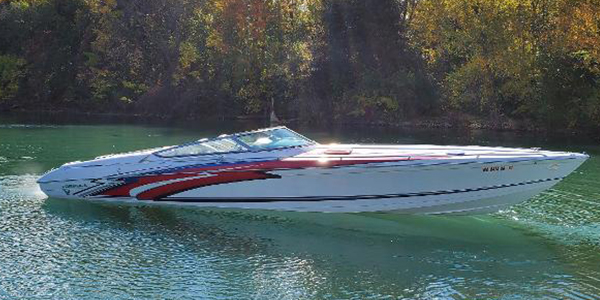 Formula Boats has a winning heritage. Clinching the 2003 APBA (American Power Boat Association) World Championships in offshore Factory II Class racing for the second time since winning both the World and National championships in 2000, Formula Boats validated its already-prestigious reputation as a premier boat manufacturer. “Any time you can back up that kind of championship like we did again this year lets people know that it wasn’t a fluke the first or second time – it’s really what our heritage is all about,” says Pat Laux, plant manager for the Decatur, Ind. company.

The company’s uniqueness, adds Laux, is its ability to excel in three areas of boat design and manufacturing. “We strive to be the best in not only fast, high-performance offshore boats, which is the foundation of our heritage, but we also have a major leadership role in producing cruisers and an in-between style of day boat we call our Sun Sport and our Super Sport,” Laux says.

Sea-Worthy
Formula Boats surveys the industry landscape judiciously, cautious to identify customer desires as trends – and not fade-away fads. This is the kind of circumspection that has navigated the company into uncharted waters and many “firsts” in the industry. A common theme at Formula Boats is the innovative structural design engineering that goes into every handmade boat coming out the factory doors.

It all started in 1962, with Formula’s introduction to the market of the industry’s first deep-V hull boats. “The 24-degree dead-rise deep-V hull is a mainstay in the industry today, even though people have tried other configurations,” Laux says. All Formula boats are engineered with deep-V hulls and some incorporate stepped hulls, while others do not.
Another trend Formula noticed during the mid-1990s involved stepped hulls. “We watched that closely to make sure it was a trend and not a fad because we know that following fads can be dangerous because it takes your eyes away from where your focus should be,” Laux says. “We began building our FAS3Tech(tm) boat bottoms using this design because with fast boats you can put all the horsepower you want in your boats, but if you don’t have a well-designed and engineered hull bottom, you won’t get the performance.”

The stepped hull has a deep-V configuration that is stepped up several times along the keel in order to help break up resistance. This gives the boats speed while reducing friction on the water. “Because you are trying to accomplish two things in building a boat and that is you want it to go fast and you want it to be able to maintain its stability so it doesn’t go squirrelly on you,” explains Laux.

“Another element that went along with the stepped hull was our state-of-the-art structural system that supports the bottom of our FAS3Tech boats,” continues Laux. “We call that our structural grid system, which replaced the plywood egg-crate design stringer systems that gave the bottom its strength and provided the support for the deck surface.” The structural grid system is a one-piece fiberglass structure adhered to the bottom of the boat. “We really leapfrogged the industry with that piece of engineering that made our boats stronger and better engineered.”

During the 1980s, the company again led the charge in curved glass windshields. “Today this is pretty standard stuff in the industry,” Laux says. Prior to that, windshields were flat and square with frames of aluminum. Today, stainless steel extrusions frame the curved windshields.

As we all know, those fast, high-performance boats are not shy and let you know when they are coming. “We patented a system for keeping the boats quieter,” Laux says. “During the 1980s we developed Silent Thunder(r), which is a system of taking the exhaust water that cools the engines and sending it through a series of baffles before it’s discharged. This system really brought down the decibel levels.”

Another first to the industry is the walk-through windshield, which offers a safer way to get to the bow of the boat. “In many boats you have to shimmy around the arch to get forward and all you have is the bow rail to keep you from falling overboard,” Laux says.

Sport in the Sun
In 1994, Formula Boats noticed another developing trend in the industry toward a boat designed to appeal to customers looking for a boat in-between the fast, high-performance boats and the cruisers. “There were elements of a kind of boat starting to appear in the marketplace, but they didn’t really hit the mark, and we believe we were really the first company to nail this style of day boats,” notes Laux.

Sun Sports, the shorter of the two, and Super Sports range from 26 feet to 40 feet in length. “We liken these two lines of day boats as kind of like the SUV trend,” Laux says, adding that these boats account for about 50 percent of the company’s revenues. Not as fast as the high-performance boats, yet not as slow as the cruisers, the day boats offer a full range of cockpit amenities.

“Generally speaking, people go boating on a nice day and they are more likely to spend their time out in the open cockpit,” Laux says. “Not many people stay on their boats overnight, so you really don’t need the space below as much as above. This is really a boater’s boat and it offers a wet bar in the cockpit where people can store drinks and picnic snacks. There’s space for features like lots of seating, air conditioning, microwaves, TVs and the larger Super Sports are equipped with 110 power – so they are almost like floating homes. We stuck our necks out a bit on developing this new line of boats and it was definitely a homerun for us because the acceptance was larger than we expected it to be.”
Formula’s new flagship in its Performance Cruisers line is the 47 Yacht, introduced in the fall of 2002. “This is our first foray into building yachts and we spared absolutely no expense when we outfitted this boat,” Laux says. “For example, all the cabinetry is American cherry Class A finish – it’s really pure artwork and all the grains of the cherry wood are matched so the wood grain flows from panel to panel.”

The Performance Cruiser line ranges from 27 feet through 47 feet in length. “We are now in the process of building our 10th yacht now and, although we’ve always been known for producing high-quality boats, we just raised the bar for ourselves with this yacht,” says Laux, adding that this line has to have just about everything one expects in one’s house, and then some.

Vanguard Wake
Formula, founded in 1962, merged with Thunderbird (founded in 1956) and in 1976 the Porter family bought the Thunderbird Formula. The Porter family still manages the family-operated company, with Scott Porter at the helm as president. “Another very important member of our company is our exclusive designer, John Adams, who’s been with us since 1971,” Laux says. “John is renowned as the best designer in the industry and anyone can recognize our boats from a distance because they have a very distinct look to them.”

Recently expanding its facility in Decatur in 2000, Formula now operates 500,000 square feet of manufacturing space, where 560 people craft Formula boats. The company enjoys a healthy 20 percent annual growth that is more than acceptable. “This kind of growth allows us to maintain our quality because, after all, these are all hand-crafted boats we make here,” Laux says.

Formula, he adds, has no intentions of growing through acquisition. “We gained our position in the industry through years of producing quality boats and we could lose that reputation immediately if we take our eye off the mark and build a series of boats that just don’t measure up to our name or our reputation. Once you lose that reputation, it’s very difficult to regain it.”

Laux says Formula will stay the course and stay focused on doing the very best. “We make few mistakes and we are conservative in not rushing into new things,” he says. “We would rather take longer and have the best idea come forward right than just to run with an idea just because it’s new. For us to develop two boats a year is a big year for us – but they are absolutely flawlessly right when they are done – and that’s the beauty of our company. We will never be the biggest boat company and we have no desire to be. We just want to continue to maintain our reputation as being the best in the business.”