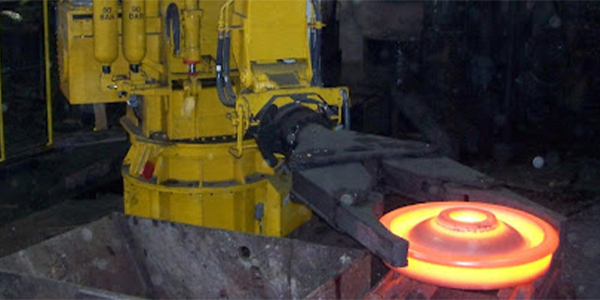 Companies in troubled rust-belt industries often speak of “rising from the ashes,” but few have actually pulled that feat off as well as Standard Steel, LLC, the industry leader in railroad wheels and axles.

Battered by foreign competition and the sluggish economy, the historic company not only reorganized but also refocused itself, and is now gaining speed like the freight trains it supplies.

“We’ve done a lot of technologically advanced things. We have increased our activities to assure that we stay ahead of the industry and our customer requirements and expectations,” said Vice President of Technology Cameron Lonsdale, explaining how the company has been able to bounce back. “We were the first wheel manufacturer to use the technologically advanced Phased Array ultrasonic inspection system for railway wheels. We brought it to the industry, and now all others have followed our lead.”

Standard Steel, based in Burnham, Pa., in the central portion of that industrial state, has been making major advances in technology for more than two centuries.

VANGUARD OF INDUSTRIAL REVOLUTION
Indeed, few companies in America can boast as rich a history as Standard Steel, which is likely the oldest continuously operating forging company in America. The company, initially known as Freedom Forge, was founded in 1795 during the first term of President George Washington. Initially, the plant in central Pennsylvania produced iron bars and rods.

The original blast furnace was destroyed by fire, but a new 145-ton blast furnace – then known as the Freedom Iron Works – opened on the Lewistown site in the years leading up to the War of 1812. As the Industrial Revolution began to flourish in the 19th century, so did the plant.

The furnace increased its capacity some five-fold after the Pennsylvania Canal reached Lewistown in 1829. By then, the railroad industry was on the verge of taking shape in America. The Pennsylvania Railroad began to serve the central Pennsylvania community in 1848.

Less than a decade later, the Pennsylvania company was renamed Freedom Iron Company. With annual capacity at 1,310 tons, the first ring mill in the United States was installed to produce 2,000 locomotive tires per year.

During the latter half of the 19th century, Standard focused more and more on steelmaking, and it eventually changed its name to Standard Steel in 1875. As the railroad industry flourished in America, so did the company. It also was involved in several important twists in U.S. history.

John Armstrong Wright, an engineer by training and Superintendent of Freedom Iron Works, joined the board of the Pennsylvania Railroad as it was still being mapped out in the 1840s. He was to have a powerful influence in building of the rail line across Pennsylvania, especially in the area of the famous “Horseshoe Curve.” He was also responsible for both the laying out and the naming of the surrounding railway yards he called Altoona, after a Cherokee word he had heard in Georgia. He made sure the rail line went through Lewistown, adjacent Burnham, the location of Freedom Iron Company at the time of his purchasing it in 1849.

Although that decision may have put Lewistown on the map, the town could have ended up as a large city if not for another turn of fate. Said Vice President of Sales and Operations John Hilton, Sr., “One of our works managers back in those days was none other than Andrew Carnegie. He tried to introduce the Bessemer steelmaking process to Freedom Forge in 1866 to produce rail and unfortunately, it was not successful here because the local ore was too high in phosphorus, making it very brittle, and causing a cracking problem. That caused Freedom Forge major financial difficulties at the time. Carnegie moved to Pittsburgh in 1872, resolved the problem, working with people in Sheffield and Birmingham, England, and the rest is history.”

“FREEDOM WHEEL”
The company’s history throughout the 20th century was punctuated by several milestones. In 1904 it produced the first solid forged and rolled wheel in the United States. By 1939, Standard Steel was making one-fifth of all the locomotive tires in the United States. Today, the company provides the state-of-the art “S Wheel,” incorporating a curved plate designed to minimize stresses due to overheating during car braking. During World War I, commercial operations modified to include artillery shells and howitzer forgings. Then, when World War II arrived, the factory was retooled to include the production of gun barrels, tank castings and military forgings. Annual steelmaking capacity was 160,000 tons.

But around the time that Standard Steel celebrated its 200th anniversary, the steel industry in the United States was under assault from both foreign imports and from a general decline in manufacturing here. In 2001, the company, which had been calling itself Freedom Forge again for about two decades, filed for voluntary protection under Chapter 11 bankruptcy in an effort to reorganize, although it continued to operate during the bankruptcy process.

In 2002, after months of negotiations, Judge Sue Robinson of the United States Bankruptcy Court in Wilmington, Del., awarded the assets of Freedom Forge to Farrell and Company, a group of investors led by Mike Farrell and CCIL, an affiliate of Citicorp Venture Capital. Farrell had been the CEO of Freedom Forge Corporation since the company filed for bankruptcy the previous year. The company reached a five-year contract with the United Steelworkers and changed the operating company’s corporate name to Standard Steel, LLC.

The firm also made some very difficult choices, one being to focus solely on its core railroad business. In 2003, the company slashed its payroll when it exited the product line at the Burnham plant that produced steel rings for jet engines, power plants, mining and oil exploration. The Latrobe plant was closed in 2004. A European subsidiary, Paris-based Valdunes that had been acquired in 1999, was divested in 2002.

A NEW DIRECTION
“We have totally dedicated all of our resources toward our railway wheels and axle products,” said Hilton. The repositioning of Standard Steel leaves the company with 600 employees at the Burnham site, with a million and a half square feet of buildings covering a 250-acre site.

Already, the company’s moves are paying off. “The market is experiencing a recovery that started around the middle of last year,” Hilton said. Indeed, the railroad industry – particularly in the area of freight transportation – tends to rise and fall with the underlying economy. “We serve the domestic market, and it’s really the GDP that drives the railway markets. When the GDP grows and is strong and robust, the railroad market is typically strong and robust,” Hilton said.

One thing that has greatly helped the company in emerging from Chapter 11 was a huge capital investment in 1997 of some $40 million in a new wheel forging line at Burnham. The new high-tech line replaces the one that had been in existence since 1917. Vice President of Manufacturing John Cummings, Sr. said, “That investment allowed us to increase production and, most importantly, it reduced our costs to manufacture our railroad wheels.

Additionally, it enabled us to survive during the bankruptcy period and depressed railcar manufacturing markets. In fact, the number of North American-based manufacturers of railroad wheels shrunk from four to just two during that period. And Standard Steel’s surviving domestic competitor only produces cast steel wheels, which is a totally different process than the forged wheels produced at the Pennsylvania mill.

New freight cars are still the biggest driver of business for Standard Steel. Company officials say that about 120,000 of the wheels it produces go toward newly built freight cars, with another 60,000 into the aftermarket. The locomotive and passenger segments of the market are much smaller, although Standard Steel does supply the wheels for cross-country passenger trains.

THE TEAM APPROACH
Standard Steel is also a recognized leader in supplying railway axles, the foundation of railway rolling stock to freight, locomotive and transit markets. The company says that success in that market, as well as the wheel market, is due in large part to Standard Steel’s exclusive bottom pour ingot process.

Hilton said that the company is currently looking at increasing its capacity by investing in certain areas such as heat-treating and wheel machining that will result in new business opportunities.

Standard Steel is also working closely with industry groups to develop new technologies, including a wheel with a special alloy that can better handle heavier loads, and has worked on a new high-adhesion wheel for the locomotive industry.

Cummings said the company has flourished because of its team approach. “From the CEO to the guys on the floor, who make the product, everybody is totally customer oriented. Our goal, to serve the railway market better than anyone else in the industry, starts on the shop floor, permeates the whole organization and is a key to our customer service success,” he said.

It’s a big goal, but it is one that shouldn’t be too hard to reach for a company that has had 209 years to practice and counting.