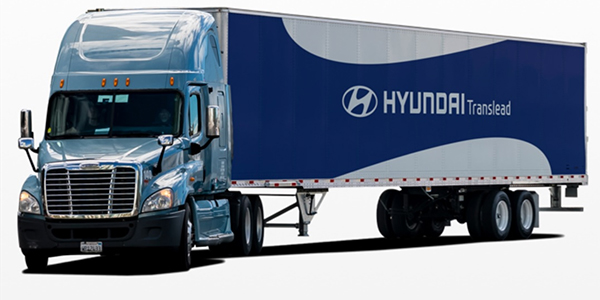 There are many in the industry that believes Hyundai Motor Co. only builds cars. Well, think again. Hyundai Translead, as a division of Hyundai Motors, has taken the lead in an array of innovations in its design and production of trailers, containers and chassis for the North American market.

For example: on its refrigerated trailer the company has invented a corrugated aluminum roof – called the Accordion Roof(r) – to eliminate separation of the insulation due to the contraction and expansion that occurs from sun exposure; the proprietary Hyundai design keeps the integrity of the roof in place. The company also is responsible for devising what it calls a floating floor, which is not bolted, but rests on the vehicle’s cross-members to eradicate undo stress. Such innovation has caught the attention of high-profile companies and recently, Hyundai Translead was awarded a contract from Kroger’s, the supermarket giant, to build in excess of 100 refrigerated trailers.

In addition, says Vice President of Sales Glenn Harney, the company now has two more products for which patents are pending, in the area of dry freight van design for thin wall use.

All of this points to the fact that there is more than innovation at work here; it is, in effect, an acknowledgment and respect for the science behind the design. These products, stresses Harney, are not just big boxes but are the vessels that carry sensitive cargo, from food to military equipment. Their construction must be durable, rugged and state-of-the-art.

Best of Both Worlds
Hyundai Translead manufactures its equipment in a plant in Tijuana, Mexico, established in 1990 as a division of Hyundai Motors to capitalize on the creation of manufacturing enterprise zones in Mexico, and in line with the North American Free Trade Agreement (the company is headquartered in nearby San Diego, Calif.). The plant initially manufactured ISO containers for Hyundai’s own use. In 1993 Hyundai converted from ISO containers to aluminum domestic containers, and in 1994, expanded to trailer production; in 1995 it began to make refrigerated containers for transporting food. In addition, the company builds converter dollies that are used between two 28-foot trailers to pull one behind the other, as well as Container Roll in/Roll Out Platforms to load various items and flat racks, which are used solely by the military.

Other applications include chassis configured for steamship lines, railroad and intermodal leasing companies, and specialized van trailers for regional, national and private truckload carriers; included in the latter are the fleets that haul goods for companies such as Kohl’s and Coca-Cola.

“1996 was a big milestone for us, ” Harney adds, “because we became the first trailer and container manufacturer to receive ISO 9002 certification.”

Taking the lead
As it continues to research ways to improve on its products Hyundai Translead continues to churn out an impressive array of equipment in direct response to customers’ needs. Especially important is its plate trailer design utilizing thin-wall technology that allows maximum use of inside width giving the carriers the ability to pinwheel the pallets in the trailer for added capacity.

Available on quick production turnarounds, these plate trailers come with a variety of options as well as a broad range of standard features that include a rear door lock assembly with nylon bushings for smooth, easy opening operation and heavy-duty cross member attachment using four high-strength 3/8-inch diameter rivets per end. A moisture sealer is applied full length at all floorboard joints and the company pre-undercoats floorboards for 100 percent coverage. Unique hollow sidewall stiffener design produces the highest strength and stiffness to weight ratio.

In the area of refrigerated containers Hyundai’s products feature lightweight designs with increased structural integrity. Unique foaming and building technologies combine the advantage of both conventional and sandwich panel methods. In addition to refrigerated, other container products include domestic dry, and domestic heated.

All this and chassis too
Hyundai Translead is the largest chassis supplier in the U.S. market, producing a wide variety of sizes – 20-, 40-, 48- and 53-foot – as well as myriad designs and specifications; these include fixed and sliding tandem suspension, tri-axle chassis and even extendable frame models.

Standard chassis features include all steel parts that are shot blasted, primed before and after fabrication and welded with zinc epoxy primer with an upper coupler. But the attention to rugged design and detail doesn’t end here. Hyundai Translead’s chassis also feature all hi-tensile steel construction and interior walls closed and coated with zinc prime. Drainage holes are provided for superior corrosion protection. The front bolster has a seven-inch-wide by eight-inch-deep channel section made from hi-tensile steel with two horizontal locking pin assemblies. There is also under-mount suspension with springs, a 12-volt sealed electrical system with internal ground, molded connectors to accept sealed lamps, and conspicuity striping. All steel parts are shot blasted, coated with epoxy zinc primer and finished with topcoat.

Hyundai Translead’s insulated trailer and container sidewall, roof and floor assemblies are insulated in presses by injection computer controlled mixtures and quantities of insulated foam. All foam is fully cured prior to removal from the press, ensuring uniform insulation.

In addition to the construction of containers, chassis and trailers, the company has further diversified by adding a facility for rebuilding transmissions for the automotive industry, specifically Hyundai and Kia. In operation a little over a year, Harney reports that this business has so far contributed $20 million worth of sales.

The big comeback
As a company responsible for just under $300 million in sales in 2003, Hyundai Translead has witnessed the trailer market come back “with a vengeance” in the past year, representing, Harney adds, “three years of pent up demand.” This bodes well for a company that is heavily reliant on manufacturing and, as such, has felt the effects of the economic downtown over the last few years. But as Harney attests, the swing toward the positive side has indicated an economic up tick that the company is well poised to take advantage of.

And it seems that this has already occurred; in 2003 the company’s total output was 12,900 units, of which 9,000 were trailers and 4,000 were containers. In addition, the company built 15,000 chassis. Such activity makes Hyundai Translead not only one busy company but also a major player in its industry.

Says Harney: “In terms of total production, this makes us the fourth largest in the business.”