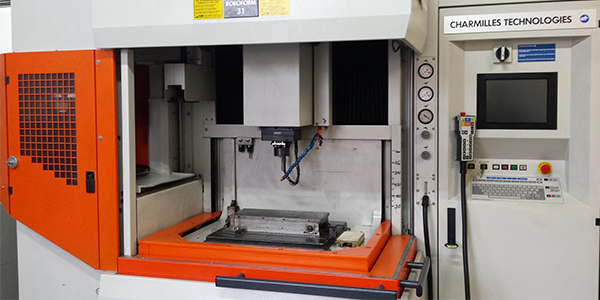 In September and October of last year — in the midst of the recession and the nation’s attempt to recover from the Sept. 11 terrorist attacks, with manufacturers in a variety of industries under the crush of the declining market — Charmilles Technologies did something very remarkable. The North American business unit of AGIE CHARMILLES of Switzerland logged machine orders that were higher than their monthly average for 2001 year to date.

Naturally, there is a reason for this kind of business performance. There is a reason that Charmilles has installed about 10,000 electrical-discharge (EDM) machine tools in the United States alone since opening its doors in 1954. There also is a reason that, in a recent survey, 99 percent of users said they would buy again from Charmilles. That reason is customer support.

Charmilles “provides the best customer support in the EDM industry and probably the best in the entire machine tool industry,” claims Harry Moser, president of the Lincolnshire, Ill.-based manufacturer. “For example, the company has service engineers in 33 locations around North America. “Our customer service department receives hundreds of calls a day, and about 96 percent of all customer questions are answered immediately. Also, 98 percent of the parts that are shipped by Charmilles come from off the shelf,” he says.

Charmilles’ commitment to customer support is historic in the truest sense. Its parent, AGIE CHARMILLES, is 70 percent owned by Georg Fischer Corp, which purchased Charmilles in 1983 and bought AGIE in 1996. This year marks Georg Fischer’s 200th anniversary in business. Companies don’t last that long unless they’re doing what their customers want.

Shaped for Solutions
Customer support for Charmilles goes beyond having someone available to answer questions and ship parts. It also embraces being its customers’ chief problem solver. Charmilles has committed itself to offering its EDM machines as the solutions to a variety of customers’ manufacturing problems.

“For example,” Moser says, “some companies may want a product produced more economically. Or, they may want a product manufactured with tighter tolerances. Some companies may be experiencing burr problems. Others may have a problem with the repeatability of their manufacturing process. With the use of Charmilles’ EDM machines, companies have a much easier time repeating a particular manufacturing process. Still other companies have problems cutting a heat-treated part, a problem that can be solved with the use of an EDM machine.”

This level of customer support — particularly, the willingness to help customers through to the solutions to their problems — has propelled Charmilles to the top of the EDM machine industry. A quick look at its customer roster demonstrates Charmilles’ top-tier standing in this unique market. The company counts some of the leading OEM manufacturers in the medical, power generation and jet-engine component industries. Charmilles’ EDMs are used to producing land-based turbines for utilities, and are involved in shaping and cutting high-performance alloys that are hard to cut with conventional methods.One unique facet of Charmilles’ customer base is its high standing in the auto racingcommunity. The company enjoys close relationships with many of the top teams in the sport, including Mclaren, Bennetton and Penske. The cars used by these teams all include products crafted by Charmilles’ EDMs.

Charmilles has reached the EDM market’s pinnacle in the face of daunting competition. Charmilles’ customers have faced severe price competition from Asia and are best equipped to compete with Asian companies in price because of the automation associated with Charmilles’ EDM machines. For the last 10-15 years the four or five Japanese competitors outsold Charmilles and its sister company on average of about 2 to 1. However, for the last year, U.S. import data show EOM imports from Switzerland exceeding those from Japan. In addition, only two Swiss companies supply some of the U.S. demand from U.S. factories. The company further underscores this position with its involvement in the communities where its facilities are located (aside from its Lincolnshire, North America headquarters and plant, there are factories in Owosso, Mich., and two in Geneva and Schaffhausen in Switzerland).

The company operates programs to encourage young people to go into the machine tool trade. “We make an effort to inform schools, universities and the media about the benefits of careers in manufacturing,” says Moser. “The company makes the point that jobs in the industry are high paying and stable. In many instances, a four-year degree will suffice for a good career in the field. We support apprentice-training programs, and we sponsor an annual apprentice contest through the NTMA (National Tooling and Machining Association). The employer-of-the-year winner gets a Charmilles EDM.” (Learn more about Charmille’s material on promoting careers in manufacturing by visiting www.charmillesus.com.)

Value in the Line
The Charmilles product line consists of both die-sinking EDM machines and wire-cut EDMs, and two of its key brand names are Robofil and Roboform. EDMs are used throughout industry for stamping, die casting, dies and molds, with about 60 percent of them being used to make tools. They can cut very hard materials to tolerances of 1/10,000 of an inch. Die-sinking EDMs form shapes negatively in the metal with a three-dimensional electrode, and are typically used to make plastic injection molds. Wire-cut EDMs store shapes on a computer; the computer passes the shape as codes to the machine, which then cuts the shape by guiding the wire path. Wire-cut EDMs are most commonly used to make stamping dies or for medical applications. “EDMs represent 6 to 7 percent of the value of all machine tools sold,” Moser says. “EDM is the third most popular process by value.”

In the Robofil line, Charmilles recently introduced the Robofil 390 and 690 series, which feature a unique closed design housing the control and generator components all in one unit. These series also house the machine tool part in its unit. The company also has released a high-speed die-sinking EDM called the Roboform 35P, which is uniquely efficient at making molds and cutting carbide.

Charmilles has slated two other product launches for this year’s IMTS trade show in Chicago. The Robofil 240CC and the Robofil 440CC are high-speed wire-cut EDMs; the CC stands for “clean cut.” These machines feature a completely new generator design. They can cut at speeds of 37 square inches per hour, or 25 percent to 30 percent faster than any previous wire-cut EDM ever produced.

The future prospects for wire-cut EDMs are promising. “The medical products market could potentially be a large customer for these types of machines,” says Moser. “Wire-cut EDMs are used to manufacture implants, joints and orthoscopic surgical devices, among others. Wire-cut EDMs are and will remain our best-selling products.”

Wire-cut EDMs make the future for Charmilles as a whole promising as well. The company already is the largest supplier of EDM machines in both North America and the world. In a message to the company’s employees, Moser predicted a stronger 2002 for Charmilles, helped by strength in the medical and defense end-use markets. Thanks to its customer support efforts, the company has a firm foundation with customers in these and other industries as it faces the future.