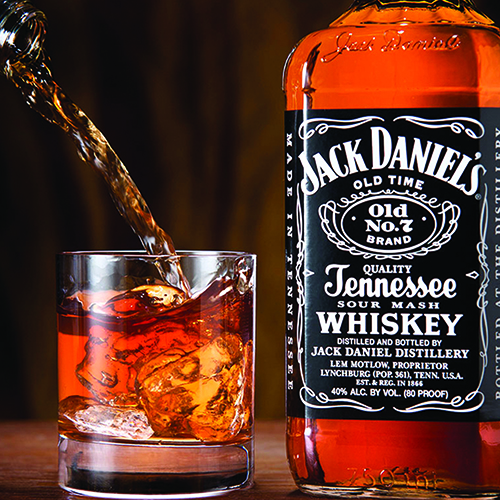 It was in 1955 when Frank Sinatra wandered on to stage with a rocks glass in hand and uttered the now-famous words to his audience, “Ladies and gentlemen, this is Jack Daniel’s, and it’s the nectar of the gods.” Though the distillery had been around for nearly 100 years, the Lynchburg company was still a small, albeit well-respected regional brand, moving roughly 150,000 cases annually of its black-labeled Tennessee whiskey (which Sinatra himself would later be buried with a bottle of after his death in 1998). A year later, however, that figure doubled, and the company never looked back.

In 2016, Jack Daniels is celebrating its 150th anniversary, and the success that initially took off in the 50s has only continued to snowball over the last six decades. “Jack Daniel’s is a Tennessee tradition that was born in one of the state’s smallest counties and has grown into what is now a global leading brand,” says Larry Combs, senior vice president and general manager of the company’s Lynchburg distillery.

And he’s right. Walking into just about any liquor store or bar across the United States and beyond, one can be assured that they will most likely find bottles with the Jack Daniels label stocked and featured prominently on the shelves.

Continued Expansion
It’s this kind of continued success that led the company, which is owned by Brown Forman, to invest $103 million into expanding its distillery in Lynchburg in 2013. Facing rising demand, the funds went towards the addition of stills, barrel warehouses, and related infrastructure in order to increase capacity with respect to their distilling operations. “What we did then was increase overall production capacity by twenty percent, adding to infrastructure in a modular manner that would enable us to easily expand again down the road,” says Combs.

“Down the road” proved to be only a few years later, as the company announced in early 2016 plans to yet again grow their operations in Lynchburg. This time around, the company is constructing two entirely new barrelhouses alongside modifications and expansions to its existing bottling facility, allowing the alcohol company to further increase their bottling and shipping capacity as demand shows no signs of slowing down. “Expanding capacity is the biggest part of this project, because our whiskey will remain stored inside barrels from anywhere from four to seven years before we empty them,” says Combs, adding, “As such, keeping our capacity levels in line with our growth trajectory is a carefully done, important part for both the present and future of Jack Daniels.”

The current expansion isn’t just exclusive to the company’s production facilities, however, as Jack Daniels is also using the funds to upgrade and enhance its Visitor’s Center, whose popularity has grown to the point where it saw nearly 275,000 individuals pass through its doors in 2015 alone. “Lynchburg isn’t exactly the easiest place to get to, so if someone is coming here it’s because they really want to,” Combs says, with a laugh while adding, “In spite of this, we had record visitor numbers and to us, that really says a lot—not just about the rise of whiskey, but rather our specific, central role in such.”

Prioritizing the Process
But above all, the expansion in 2016 speaks to Jack Daniels unrelenting stance towards maintaining the highest degree of control possible in their operations and safeguarding their identity as intimate makers of whiskey. Combs says that when looking at the burgeoning whiskey market that has quickly developed across the United States and beyond, many brands are flying under false flags as they look to promote historical tradition and identity where, frankly, there isn’t any.

“I think what drives our commitment to quality, and what drives consumers around the world is this desire to connect with the brand they’re drinking, and as a result you’re seeing many other labels emerge and attempt to mimic such,” he says, adding, “But with Jack Daniels, our tradition is organic and we recognize the value of being able to draw from such in today’s world.”

Combs says that Jack Daniels oversees its entire production process, “from barrel to bottle.” In fact, the entire process begins in the company’s Rickyard, where Jack Daniels buys sugar maple from local forests to make the charcoal that the whiskey will ultimately be filtered through to ensure the mellow, flavorful taste that the brand is known for.

Water is also key, and the company oversees its own spring—Cave Spring—where the natural spring water stays at a constant 56 degrees and is monitored on a 24-hour basis. The water is mixed and cooked with a mixture of corn to create a mash, where rye, malted barley, and yeast are subsequently added in as well. The mash is then fermented for six days in a large copper still.

Once the whiskey is distilled to 140 proof, it is—as previously mentioned—filtered through a process called charcoal mellowing. “This filtration process takes between five and seven days, but is the step that really separates Jack Daniels from other whiskeys,” says Combs.

After the whiskey has made its way through the charcoal, it is stored in a newly charred barrel made out of locally sourced lumber for anywhere from four to seven years. The end result? The most popular whiskey in the history of alcohol.

True To Its Roots
The town of Lynchburg is itself an extension of the Jack Daniels distillery, with the company’s 600 employees working there and living in and around the town. “We have invested into the town as well, because we know that our employees are just as important to our success as our process,” Combs says, adding, “And by investing in our employees and the surrounding area, we have been able to develop one of the most engaged manufacturing sites across the country.”

In a time where competition in the whiskey market has never been more prevalent, Jack Daniels has reactively taken its production to a new level, while never compromising the integrity of its product. It’s a scarce thing in today’s efficiency driven market, where stainless steel tubes inside massive facilities pump out generic, uninspired spirits for the masses.

But for Jack Daniels, it’s a successful marriage of old and new world practices that has led to the continued creation of a drink that is mellow, smooth, and full of character. Giving its consumers the true taste of Tennessee, Jack Daniels achieves the increasingly elusive product identity of simply being the real deal.