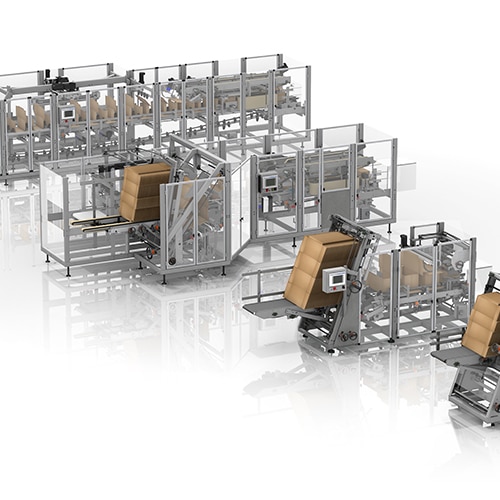 In a conversation with Industry Today, Steve Lipps, vice president of sales and marketing, and Mary Ellen Kerber, marketing manager, talk about the unique path the company has taken over the years, the philosophy that has guided and enabled them to distinguish themselves amongst a crowded market, and why their performance in 2013 has them excited about the future of Douglas Machine and its impact across additional markets. Steve Engelhardt reports.

In 1964, three individuals, Bud Thoen and brothers Paul and Vern Anderson, initially founded a machine shop with the goal of providing a local packaging resource for the 13,000 residents of the town of Alexandria, Minn. “We figured if we could build a company and hire maybe five to seven local individuals, it would be a business that was mutually beneficial to us and the community.”

Today, Douglas Machine employs over 700 individuals, a tad higher than the previous figure they had initially hoped for. And while the company today is 100 percent employee-owned, the original owners were instrumental in achieving what today is still an extremely communal, and faithful business.

There and Back Again
Lipps says that during the 70s and 80s, Douglas Machine surged in business and was expanding and innovating in an exponential manner, with the company expanding its production facilities and taking on greater roles with food and beverages giants like Coca Cola. Then came 1986, when a UK-based equipment processor called Aluminum Plant & Vessel Company Limited (APV-PLC) bought out the company and took it on as a wholly owned subsidiary. “It looked like that was it for the name Douglas Machine,” Lipps says, but adds, “however, after a few years APV-PLC had a strong decline in their overall business and an opportunity emerged for the Douglas Machine division they had taken on, to be sold once again.” Enter, the Anderson brothers, the same two individuals involved in the founding of the original company.

Paul and Vern Anderson saw their chance to reclaim what they had created, and bought back the company in 1993, and the name Douglas Machine was once again competing in the market as an independent brand. “They bought it back through venture capital, and after paying off the investors, they decided to turn the company into an entirely employee-owned business,” he says, noting, “That decision has really spurred our company onward from a motivational standpoint, because they could have chosen much more lucrative options, but opted to maintain the tradition and identity of the original company by placing ownership in the employees’ hands.”

Kerber says the decision has had a profound impact on the company and its products, saying that the employees at Douglas Machine today “repay the faith bestowed upon them by dedicating their craft to our products and services, and operate under the notion of ‘treating others the way you want to be treated’.”

Productive Packaging
In terms of Douglas Machine’s actual products and services, Lipps says you can find their footprint in most grocery stores and major supermarkets across the United States. “We break our business down into three different materials, those, being corrugate solutions, shrink solutions, and paperboard solutions,” he says, adding, “if you look at a case of water or a four-pack of energy drinks on a shelf, we provide the material solutions that keep the food or beverages tightly packed together, designed in a manner that allows store managers to efficiently and effectively unload and set up their products, minimizing time and labor during the process.”

He says they typically do most of their business in the food and beverage industry, in fact they have a distribution center in Alexandria dedicated entirely to a global leader in the snack industry, however they are seeing increased opportunities in other markets as well, as demand for automated packaging upgrades over manual systems begin to become widespread.

One of these sectors is the pharmaceutical industry, and Kerber discusses the impact their products and services have been having on pharma-based companies, particularly through that of their TriVex RLi® top-loading solution. “TriVex’s robotic loader and end-effector picks and spreads bottles for accurate placement into cases with protective trays,” she says, adding, “with one machine, the TriVex RLi provides case erecting, pocketed bottom and top tray placement, product loading, leaflet insertion, in-line case labeling, and case sealing.”

Lipps adds that the shift from a manual operation to a robotic, full automation solution triples the throughput of a system. “The customers here are largely manual in their operation, and it can be a big initial leap for them to go from ten or fifteen individuals standing around an operation, to only one or two,” he says, adding, “a lot of customization, specific to a company’s system and needs, go into our machines, and we find much our of success and sustainability of our machines comes from this ‘tailored’ nature we offer.”

And that’s where Douglas Machine distinguishes itself amongst its competitors. Lipps says that the company isn’t so much focused on “reinventing the wheel”, but more so concerned with integrating and addressing all the specific needs and requirements for a company, and bringing them into one solution. “Our typical business encounters involve us building off existing platforms for about three-quarters of the project, and the rest is customizing it all to the specific application,” he says, adding, “we don’t ‘gut’ an entire system if it doesn’t have to be, we simply identify areas of improvement in machines and systems, and integrate it into a single solution.”

Incremental Industry
Their approach is emblematic of the packaging industry as a whole. While there was a significant technology shift in the beginning of the millennium, Lipps says that most of the changes in their business are gradual, and ebb and flow, given the niche-like nature of many packaging companies. One of the most significant changes he’s seen, however, is the expansion of diversity in the food and beverage sector, and the struggle for companies to provide packaged materials that are compatible with the needs of superstores like WalMart and Costco, as well as smaller, local ‘mom and pop’ establishments. “If you look back at the 90s, Pepsi and Coca-Cola were pretty much the market, but today you have the energy drink sector, teas, additives to water, and even craft brewing as products that require efficient and effective packaging services and solutions,” he says, adding, “the way these products are packaged varies between the size and makeup of the store.”

He says that Douglas Machine has answered this rising need by building off preexisting methods and providing machines and automated packaging that allows for as much flexibility as possible. “In the beginning, it was simply putting products in a brown box and shipping them. Today, however, you’re still putting some of those things in a brown box, but it’s being done it in a quantity that fits on the shelf of a specific store, and in a design that doesn’t require the store’s employees to use up a significant amount of time opening up the boxes and standing the products up on the shelves, which are issues that influence the way we make our machines.”

Servicing is also part of this puzzle, he says, as stores nowadays are operating on a 24-hour, 7-days-a-week basis. “Service has become critical, given the ‘around the clock’ nature of today’s world, particularly in the food and beverage industries, and is an area we have invested in strongly, both philosophically and financially,” he says, adding, “we provide limited 3-year warranties, price guarantees where we will match any outside party’s price of a spare part, and reliability assurance programs where we set up routine, ongoing preventative maintenance for our customers to ensure our machines are functioning smoothly for a very long time.”

These measures taken by Douglas Machine were tangibly actualized in 2013, when the company produced a record year of profits. And between Lipps and Kerber, they both are excited for the momentum that company has going into the future. “If you’re looking at shifts in the industry, with the reduction of packaging materials and the change from cartons to flexible packaging, our robotics and top load capabilities compliment it quite aptly,” Lipps says.

He concludes, “Our main mission is to enrich the lives of both our employees and customers, and with a duo of founders in Vern and Paul Anderson that believe in us, a line of differentiated packaging and automated services that meet current and future market needs, and a faith-based culture, I think we’ve put ourselves in a great position to continue to accomplish that.”