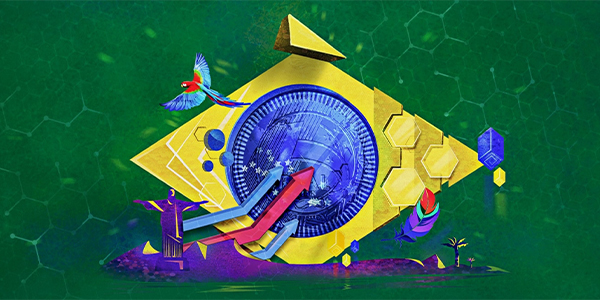 Brazil is undergoing a process of structural changes that began almost two decades ago and continues to transform the Brazilian economy and society. It is a changing dynamic of continental dimensions offering many opportunities for business and investment.

Brazilian industry is strong and diversified. It is an industry expanding its share in the global market. On average, exports of manufactured products have increased more than 20 percent a year for the first years of the current decade.

The increase in exports has produced excellent results for the economy. It virtually eliminated Brazil’s external vulnerability and played a decisive role to reduce the so-called country-risk. This investor confidence indicator has dropped sharply in the past two years based on the fact that external balance problems, which affected the Brazilian economy sharply in the past, have been overcome. In contrast with the scenario marked by chronic current account gap in the past, we have now turned it into a surplus, with significant reduction of our dependence on foreign funds. Additionally, the conclusion of the lending program with the IMF in 2005 represented a “graduation” in the position of the country in relation to its external finances.

Improvements in foreign accounts have enhanced the competitiveness of the Brazilian products, leading to a structural change in the nation’s trade balance. Robust trade surpluses are being generated in a healthy way, as result of the export boom experienced, despite sharp increase in imports. The beneficial effect is a greater economic liberalization (as measured by the sum of exports and imports as a percentage of GDP), which has doubled in recent years.

These improvements have also led to the appreciation of the Brazilian real, which raises concerns, since it reduces the profitability of exports. Recently – because international trade continues to be very active as a result of the world economic growth – the contribution of prices has exceeded that of the quantum in generating export revenues. However, with the floating exchange rate (adopted in 1999), we should soon witness a correction trend of the exchange rate.

These economic changes are strengthening the economy and consolidating its growth potential. This process, however, is not over, as many actions contemplated in the country’s Reform Agenda, which addresses structural problems, are yet to be completed.

Creating growth
Ensuring the continuity process of the reforms is a must to create an appropriate environment for sustainable growth. The priorities for the industry (and those for the private sector) are the following: reforming the tax system, modernizing labor relations, reforming the social security system, creating a regulatory environment that favors investments, and promoting an efficiency shock on public spending. No less important is promoting something along the lines of a revolution in the educational system, which represents a long-term challenge.

The capacity to advance toward building the nation we want requires active participation of business leaders in the policy-making processes. The greatest challenge will be to develop methods and ensure the necessary synergy among all players.

For this task, the role of a business organization, such as CNI, should contribute towards ensuring that the Reform Agenda is implemented swiftly and as a bridge to the future. For this purpose, CNI prepared the 2007-2015 Strategic Industrial Map, which points out the main strategic objectives to be achieved by Brazil and creates a follow-up and management system. The map constitutes the foundation for our actions over the next eight years.

There is only one alternative for Brazil: to strengthen a market economy which can make our economy stronger, modern and dynamic to face competition in the international market arena successfully, resuming growth on a rapid and sustainable basis. This is the way for us to meet the demand for better social conditions and to ensure equality and social inclusion.

Many challenges, many resources
Brazil has challenges of its own which require urgent solutions. We must be impatient regarding our problems and join forces to overcome them. We must urgently speed up our growth rate and create favorable conditions for reducing imbalances in our society.

Our problems, however, are also good business opportunities. Business leaders always face difficulties in the environment in which their companies operate. An element that illustrates the vigor of entrepreneurship in Brazil is our extraordinary vitality and capacity to become world-class players. The examples set by the Brazilian agribusiness, steel, cellulose-paper and aircraft industries constitute unquestionable evidence of this capacity.

There are broad business opportunities in Brazil. Considering both the actual and potential size of the Brazilian market, investments in the mass consumption market, such as in household appliances and electric-electronic products, are very promising. Since these market economies of scale are significant, Brazil can serve as a platform for meeting the needs of third markets (exports) not only in Latin America, but also on other continents. Expanding the infrastructure and logistics is an area with huge potential. The resource base makes the processing of agricultural and mineral products a highly competitive segment. Finally, Brazil is a leader in the production of renewable energy and has experienced remarkable development in the area of bioenergy, such as alcohol and biodiesel.

Brazil’s economy is dynamic, competitive and attractive. Many opportunities are available in the country for foreign capital in general and foreign companies in particular for investments and business directly or in partnership with Brazilian corporations. Many foreign companies have been active partners in Brazil’s privatization process, particularly in the infrastructure area. We wish this participation to grow in other sectors and in the industrial segments.

Armando Monteiro Neto is President of Brazil’s National Confederation of Industry (CNI). Established on Aug. 12, 1938 as the chief institutional representative of Brazilian industry, the CNI coordinates a system comprising 27 Federations of Industry which represent all of the country’s states and the Federal District – counting with a membership of some 1,016 employers’ unions – and oversees the National Industrial Training Service (SENAI), the Industrial Social Service (SESI), and the Euvaldo Lodi Institute (IEL). Visit: www.cni.org.br.