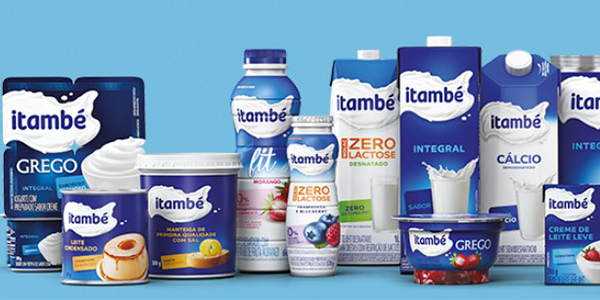 It was out of this heterogeneous administration that CCPR / Itambe began taking shape. CCPR / Itambe was a central cooperative that was created with a very clear objective: to add value to the company’s raw material while promoting milk production in Minas Gerais.

Today, Itambe is the largest dairy company with national capital. It is a 100-percent Brazilian enterprise that has expanded far beyond the state borders of Minas. Itambe’s success has gone nationwide and, as if this wasn’t impressive enough in a country the size of Brazil, Itambe exports its products to a number of countries.

The most striking aspect of Itambe in terms of its structure is the fact that it is actually a cooperative. Andre Luiz Massote Monteiro, Export Manager for Itambe, explains Itambe’s fundamental role: “Our objective is to generate added value to the raw material, milk. This way, we generate a return for the members of our cooperative and we sustain the company’s growth. We invest in new factories, we develop new product lines. We also develop new management strategies as we gain terrain in the national as well as the international market, and also encourage milk production in Brasil.”

The company is made up of 29 associated cooperatives, 8,000 suppliers, and 2,800 collaborators. The company’s role is to purchase raw materials, as well as to process, sell and distribute the final products.

In order to fulfill this role, Itambe not only processes the milk it buys from its associates, but also contributes to raising healthy livestock by developing nutritional products of the highest quality. Of course, healthy livestock means excellent raw materials.

For this reason, Itambe is subdivided in three business units. The livestock feed unit operates mostly within Brazil. Itambe Stores are also located nationwide, and provide a full line of products for Itambe’s clients and associates in the farming and livestock business. Itambe’s dairy unit is the largest and unarguably the most impressive, operating both nationally and internationally.

Since its inception in 1982, the Itambe Livestock Feed has been fully committed to offering its clients the most complete line of products for animal nutrition.

The Contagem factory is the largest commercial animal feed industrial complex in the country. It occupies a 22,000-square-meter area, and its production is fully automated.

The Contagem factory is a pioneer in the production of loose and pellet feed. Having its own laboratory puts this factory in the forefront of excellence in quality control of ingredients as well as of finished products. Besides the laboratory, the factory has a technical team of more than 30 professionals who specialize in nutrition of milk-producing bovines. These professionals work not just within the factory, but they are also a crucial part of Itambe’s client relations, as they provide detailed product information and guidance to customers.

The Nova Ponte factory is strategically located in the biggest milk-producing area in all of Brazil, while serving three vast regions in the heart of the Brazilian territory, Triangulo Mineiro, Alto Paranaiba and Southeastern Goias. This factory is also completely automated, and has the capacity of producing 15 tons of loose feed per hour and seven tons of pellet feed per hour. In combining high technology and high quality, the Nova Ponte Itambe factory produces Brazil’s very best bovine, equine, bird, and ungulate feed.

For all these reasons, Itambe has become a leader in the market of Minas Gerais. The livestock feed unit has the potential to commercialize up to 1,000 tons of product daily. This particular business unit shows that Itambe does much more than to purchase its raw materials. Itambe is also a key player in their production.

All of Itambe’s retail products are bought directly from the manufacturer and follow the tightest levels of quality control throughout the phases of delivery, stocking, and distribution. And these are not small potatoes. Itambe Stores supply more than 5,000 different products.

It is precisely the heterogeneous structuring of Itambe that has made it the giant it is today. The wide range of factories that extend throughout Brazil, its store chain, and its business and distribution centers, give Itambe a complex and sound infrastructure that have allowed the company to grow enormously domestically and to become a main player on the international scene.

The year 2005 saw the inauguration of not one, but two new Itambe factories. Both are responsible for the production of condensed milk, heavy cream, powdered milk, and butter oil.

Over the past few years, Itambe has grown tremendously in the domestic market. What is most impressive is that it satisfies a high domestic demand for dairy products and also exports to approximately 50 countries, in South America, Central America, Africa, the Middle East, and Asia. Itambe’s efficacious logistics guarantees the distribution of its dairy products worldwide. Maintaining deadlines and the highest level of quality for delivery of products guarantees customer satisfaction.

Itambe’s expansion in the international market was initially planned as a way of sustaining growth. As the value of the Brazilian national currency, the Real, began going up, Itambe was momentarily slowed down by an unfavorable exchange with its international clients. For this reason, today, Itambe’s strategy is to search for markets that look for products with higher added value, and for markets in which Itambe is highly competitive.

Itambe participates very actively in the internal market in Brazil. The commercial area in which it operates extends from North to South, through distribution centers that are located in strategic points that facilitate delivery to more than 23,000 clients.

Strategic location and distribution have made Itambe the leading brand in a number of product categories, such as butter, doce de leite or caramel, cream cheese, powdered milk, condensed milk, and heavy cream.

But these are just a few of Itambe’s dairy products. Its five industrial units, Sete Lagoas, Guanhaes, Goianaia, Para de Minas, and Uberlandia, produce approximately 150 different products. This impressive range of products has one overarching quality: top quality control throughout all production stages. All units are being certified ISO: 9000, ISO: 14000, OHSAS 18000 and HACCP.

Overall, Itambe’s five dairy production units are responsible for processing no less than five million liters of milk per day.

But Itambe’s growth in such diverse markets such as dairy products, livestock and farming products, and livestock feed would not have been possible without a brilliant R&D team.

Itambe’s team is focused mainly in the development of new products and packaging. The company’s strategy to stay on top in the market is to constantly innovate its products and to expand its mix, which is currently at approximately 150 products. For example, in the dairy unit, some of the products for export undergo modifications from their original Brazilian version in order to satisfy and comply with the consumer market in the products’ final international destination. For instance, in some countries there is a preference for thicker condensed milk, in others, it must be of a darker color, and yet somewhere else consumers prefer a less dense and lighter product. It is through the R&D initiative that Itambe knows exactly how to adapt its products to the expectations of different consumer markets.

This company has grown so impressively over the past few years thanks to its development in the administrative area.

Itambe utilizes the most up-to-date tools on management and costs and operations control. Itambe’s suppliers are chosen through a rigorous evaluation of the cost and the quality of the raw materials. Logistics costs are overseen by a team whose sole function is to maintain the highest level of efficiency in the delivery of raw materials to the factories, and of the final products to retailers, while maintaining the costs of delivery at the lowest possible level.

One of the ways in which Itambe has reduced its costs over the last couple of years has been through partnership with other companies in the food market. Together, Itambe and other companies have managed to reduce transportation and delivery costs while increasing efficiency for all parties involved. Among these partners are Sadia, Bunge, Ambev, Grupo Pao de Acucar, and Wal-Mart.

The result of these strategies has clearly been sheer growth. Over the past five years, Itambe grew dramatically. At present, Itambe has 33 percent of the market share for condensed milk; 20 percent for powdered milk, and 21 percent in heavy cream. And Itambe has only been in the condensed milk market for six years.

Itambe is synonymous with customer satisfaction with respect to service, quality, and variety. Considering such commitment to product quality and customer satisfaction, as well as an admirable relation of business reciprocity with its associates, it is no surprise that Itambe has grown 100 percent organically to be the largest and most popular dairy company in Brazil, with 100 percent national capital.

Five years ago this company was competing against international dairy suppliers, and today has edged out international competition in its home base and, in turn, has already shown that it has all the right stuff to be more than competitive in the international scene.