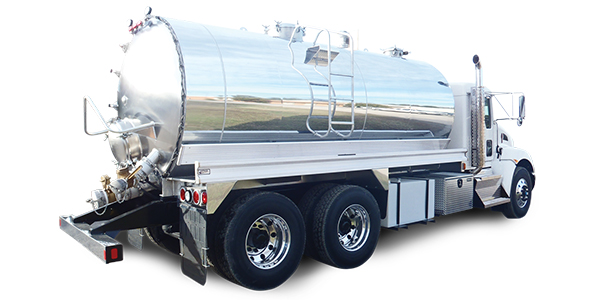 Dinners, vacations, a weekend jaunt to a bucolic setting – these are never quite the same for members of the Amthor family. One can only imagine the conversation at Thanksgiving: “Did you order that part? Did you get that invoice? Did we get the contract? Pass the turkey.”

Now into its fourth generation of Amthors, Amthor International, the world’s largest provider of tankers for myriad applications, is as small as its hometown in Virginia in the way it stresses customer satisfaction and as global as the largest hi-tech player in the way it innovates to bring new products and technologies to market. The company manufactures stainless steel, steel and aluminum tanks that are installed on commercial chassis and can hold up to 12,000 gallons. These include tanks for refined fuel, propane, waste oil, fire tankers, vacuum tanks for septic systems as well as trucks that hold portable toilets; aircraft refuelers, tanks for well drilling and tanks to transport bio-diesel fuels and used cooking oil.

Two of its newest products are the Oil-Pro truck and Flat Vac. The Oil-Pro features an oil and propane tank on separate flatbeds where customers can switch off in a matter of minutes depending on what they are delivering. This truck also can be used as a dump truck and regular flatbed that can also be interchangeable with the tanks. “It’s four trucks in one,” says Brian Amthor, director of marketing/distribution and personnel. The Flat Vac is an innovative flat vacuum tank that is used to haul numerous portable toilets at once, making it a more economical choice for portable toilet companies.

These latest products were designed by Butch Amthor. “My father is the most innovative and respected man in the industries that we serve,” Brian Amthor remarks. “We are the not only a manufacturer but we are pioneers in these industries.”

As it enjoys 77 years in business, the company is poised to grow even further as it expands its distribution network not only across North America but across the world, into countries including Europe, Russia, and China. In fact, exports currently comprise 10 to 15 percent of Amthor’s business.

Its fourth generation is comprised of Brian Amthor; his brother, David, who is general manager of the New York distribution facility, Amthor Welding. Their father and mother, Arnold “Butch” and Alice Amthor, together run the companies, and have since 1976.

The business family tree extends to Ed, Butch’s grandfather, who started a blacksmith shop in 1928. On his 75th birthday he called it quits, whereupon his son, William, took the reins and began working on farm machinery. For a while it was thought that William might be drafted into World War II but the deciding powers agreed he’d better serve the war effort with his manufacturing expertise, so he stayed where he was and manufactured farm machinery.

“My father came into the business when he was 13,” says Brian. “He worked side by side with grandpa everyday up until his death in 2004, when he was 89 years old.” At that time they distributed tankers, dump bodies and all sorts of related equipment in their New York facility. But in 1992, Butch and Alice decided to take the company into a new direction and opened their own manufacturing plant for tankers in Gretna, Va. “Before we opened our own manufacturing plant we were one of the largest tank distributors in the country but unfortunately we had no control over our destiny,” as Brian relates. “This was one of the main reasons to make this jump into manufacturing.”

To 13-year-old Brian and his brother, tankers were insignificant to the hours of play that could be had driving through the yard on golf carts or running through the shops – “a lot of employees are still working in our New York facility that were hired before I was born,” he says. David Amthor worked in the family business since high school. Brian, with degrees in business and marketing, worked at a financial institution for a while before coming on board full time last May. Butch and Alice have another son, Arnold Amthor, who is a deputy chief in the City of Newburgh, N.Y., police department.

Toda, Amthor International (www.amthorinternational.com) is well on its way to becoming the largest tank truck manufacturer in the world. The company has numerous distributors and dealers throughout North America, the Caribbean and now in Europe and Asia. Products may also be found in countries throughout the world, including Morocco, Iran, India, U.S. Virgin Islands, Cayman Islands, Russia, China, South America, Panama, and Africa.

Leading products
In its little corner of the world in Gretna, Va., the company has also become a staple in the community, supporting local organizations, and being a good corporate citizen. Further proof of its staying power is its high employee retention rate, with average employee retention of between 10-30 years, between New York and Virginia.

With production at between 600 to 800 tanks a year, at an average cost of $9,000 to $70,000, Amthor is on the expansion track right now, seeking to double the size of its Gretna, Va., facility to 120,000 square feet, which complements its 50,000-square-foot distribution facility in New York. The company’s biggest segment is refined fuels, followed by its fastest growing segment: vacuum tanks and septic trucks, which are in high demand in rural areas.

In 2004, Amthor International started its own trucking company, W.M. Amthor Inc., to deliver manufactured products across the country. Then in late 2005 it expanded its fleet to help meet increased demand for products. “When we opened Virginia the only thing we didn’t have control over was the delivery of our units and now that problem has been solved,” says Brian Amthor. W.M. Amthor Incorporated is named after Butch’s father and second-generation owner, William “Bill” Amthor. The company expects to continue to expand its fleet within the next 12 to 24 months.

The company also maintains Horizon Capital Services, Inc., a financial corporation that allows the financing of its manufactured products. All of these products, services and programs have enabled Amthor to build a considerable reputation in its industry. As it has over the past 70-plus years, Amthor will continue to deliver its dose of family-run business responsibility with a constant eye toward innovation, a combination that has given it real staying power. As Brian Amthor attests: “We are an ethical company and we have a succession plan in place. In 10, 20 years, Amthor will still be out there.”