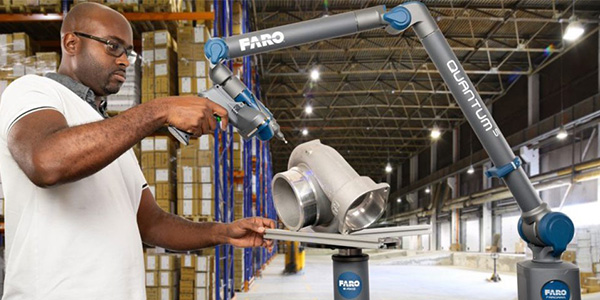 Simon Raab and Gregory Fraser met at McGill University in Montreal while completing their PhDs in mechanical engineering, while Allen Sajedi finished his B.S. in engineering. Each was fascinated with the potential of 3D technology. Today they are the leaders of 300 employees worldwide in a $45 million company called FARO Technologies Inc., a pioneering leader in the development of CAM2 systems and services for manufacturers of automotive, aerospace, industrial and consumer products.

“Since 1981, FARO’s vision has been to revolutionize the world of three-dimensional measurement by providing fast and accurate 3D measurement and orientation of any object, large or small,” said Raab, FARO’s President and CEO. The company’s product line includes portable, 3D measurement equipment, a broad range of CAD-based inspection software for portable and fixed-base coordinate measurement machines (CMMs), as well as factory-level statistical process control (SPC) and manufacturing quality consulting services.

Breadth of applications
While FARO can count some major blue chip companies among its client base, such powerhouse brands represent only about 25 percent of its business. According to Raab, 75 percent of FARO’s customers are small- to medium-size companies. “Such breadth of client size protects us from the whims of large companies, and is, I believe, indicative of the broad desirability of FARO’s products,” said Raab. “It doesn’t matter if you’re manufacturing bath tubs or jet planes, quality is your top priority and our products help ensure quality.”

For example: FARO’s 3D technology is used by aeronautical engineers in their efforts to prevent undulations in the aluminum of a plane wing. Automotive engineers use FARO products to help prevent stack up – the unfortunate process by which small imperfections in manufacturing mount up so that simple functions such as the ability to open and close a car door properly becomes impaired.

Overcoming hard and soft barriers
Success in 3D did not come about overnight for FARO. According to Raab, several barriers kept 3D measurement from wide deployment. “As late as 1994, there was almost no technology being used to easily measure in three dimensions during the production process,” said Raab. “On the hardware side, a solution was needed that could withstand difficult measurement environments. On the software side, a solution was needed that was intuitive enough for assemblers and machinists with little computer experience to use.”

FARO’s solution was the introduction of a portable, low-cost, passive arm that could make measurements in 3D. The key to this success – an estimated 6,000 installations today – was coming up with software that allowed non-computer oriented people to easily compare the measurements they make with CAD data, according to Raab. Today, FARO’s principal products include the FaroArm, a six-degree-of-freedom articulating arm, a family of advanced CAD-based measurement and reporting software and the Control Station, an all-inclusive measurement system. “FARO products provide manufacturers the freedom to measure production parts or complex assemblies right where they are built,” said Raab. “FARO customers benefit through improved productivity and enhanced product quality because of reduced rework and scrap within the manufacturing process.”

Gauge, Arm and Laser
The FARO GageTM Personal CMM® — with its .0002″ accuracy and 24 inch reach, is described as a “mount it to where you make it” solution that is truly portable, cost-effective, 3-dimensional, and requires no-training gauge for machinists. It comes complete with graphical and tabular reporting with SPC. “The FARO Gage replaces most conventional gauging devices with an expandable library of gauging and SoftCheck tools,” said Raab. “That means less overhead and a better bottom line for your facility. Setting up in seconds, the FARO Gage allows anyone, anywhere to measure parts and assemblies directly on the machinery producing them or on the surface plate. Made specifically to be used by shop floor personnel, it is accurate and powerful enough for advanced measurement and statistical analysis like GD&T and SPC.”

Raab likens the FARO Gage interface to the revolution that took place in the computer industry as a result of the graphical user interface (GUI). Just as enterprises relied on huge mainframes, which created an information bottleneck, manufacturers typically require tests of line equipment take place in a dedicated room for metrology. The PC distributed processing power throughout an organization. FARO products do the same with metrology, enabling workers to make tests on the fly, which saves time and money.

Raab raves even more about the revolutionary Platinum FaroArm®, invented by FARO to be the world’s most accurate and advanced portable measurement arm in manufacturing history. It represents the culmination of two decades of R & D with more than 10 new pending patents for innovations in accuracy, reliability and ease of use.

The Platinum FaroArm’s .0005 accuracy “renders traditional CMMs, hand tools and other portable inspection equipment obsolete,” said Raab. “Anyone, anywhere can now inspect, reverse engineer or perform CAD-to-part-analysis on parts, fixtures and assemblies with previously unheard of precision. When you partner that accuracy with its adaptable 3D measurement technology and customized zero-training soft-tools (with or without CAD), it is ideal for forming, molding, fabricating, casting and assembly facilities needing GD&T and SPC output.”

FARO’s new laser tracker offers portability in measurement with higher measuring speeds, greater accuracy and a larger working envelope than any other optical method. It enables manufacturing, engineering and quality control professionals to measure and inspect large parts, machine tools and other large objects on site, in process or wherever it’s most efficient and cost-effective.

“The FARO Laser Tracker uses an ultra-precise laser beam to measure objects in the 0 to 230-foot range,” said Raab. “With its greater angular resolution, repeatability and accuracy, the FARO Laser Tracker advances already-proven tracker technology. Among its many enhanced features is SuperADM, (Super Absolute Distance Measurement), a very high-speed distance measuring capability. ADM allows the user to measure effectively even if the laser beam has been interrupted, a key feature for the practical use of trackers.” These advances in technology have not only helped to advance myriad applications but have put FARO on the map as a leading innovator in the field of 3-D technology.