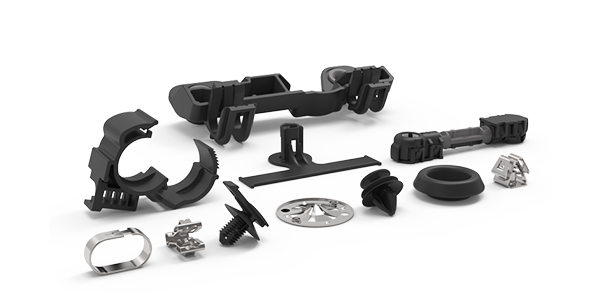 Universal patterns such as growth and evolution are manifested in all entities, whether they’re biological or corporate. Of course, in the industrial sectors, evolution is more commonly called something like “continuous development.” But, it’s evolution nonetheless, and if all is organic, as social scientists seem to think, then the genes of Tinnerman Palnut Engineered Products, Inc. are imbued with the desirable strain of innovation, which has passed down through the founders and into succeeding company generations.

Along the way, those who carried on the Tinnerman-Palnut legacy of innovation also developed a keen problem-solving capacity. The innovative approach to design coupled with an analytical approach to challenges – two highly desirable traits – helped the company become what it is today: a recognized leader in the design and manufacture of engineered fastening solutions.

Headquartered in Brunswick, Ohio, Tinnerman Palnut Engineered Products makes its precision engineered fasteners and stampings for automotive, appliance and industrial markets. It produces more than four billion fasteners each year and, with thousands of metal and plastic fastener designs to its credit, the company offers one of the industry’s most comprehensive product lines.

With its design and manufacturing skill, as well its strong problem-solving capacity, the company is equipped to address its customers’ most difficult fastening challenges. As a matter of fact, that’s Tinnerman Palnut’s forte. While other companies spout their lip service about “customer service and satisfaction,” Tinnerman Palnut has integrated that concern into its strategic plan.

“We build strategic alliances with customers by becoming an extension of their engineering and manufacturing organizations,” remarks Robert Windsor, the company’s vice president of marketing and sales. “In this industry, we are known as problem solvers. If someone has an application that demands a uniquely designed spring steel or plastic fastener assembly, or a plastic/metal lighting component, we’re the ones they call. Our customer service support and value proposition is what facilitates growth.”

Jersey Boys and an Ohio Player
The legacy of Tinnerman Palnut springs from a little thing called a Speed Nut, a spring fastening device, and an invention that was mothered by the perceived need to provide a decreased vibration product with superior holding power. But the actual genesis of Tinnerman Palnut Engineered Products goes back to the early part of the 20th Century and is derived from two sources.

On one side you had A. H. Tinnerman, of Cleveland, Ohio, the man who patented the Speed Nut in 1924. The innovation would revolutionize the assembly industry. On the other side, you had J. Roland Hotchkin and Allan Beggs, who founded the Palnut Company in New Jersey in 1926. The two-man operation produced quality stamped fasteners and eventually set the standard for the fastener industry. By the end of WWII, the company was producing an expanded fastener line with 200 different parts.

In subsequent years, the Tinnerman and Palnut businesses grew and, after various acquisitions, both companies landed beneath the umbrella of TransTechnology in 2000, where they merged. That they would get together seems almost pre-ordained. Later, Transtechnology sold its engineered fastener business, and Tinnerman and Palnut became the privately owned Tinnerman Palnut Engineered Products, Inc.

The Creative Impulse
Today, Tinnerman Palnut’s product line includes thousands of parts, all developed with the same ingenuity and functionality that went into the first Speed Nut design. Take the Trim Clip, for example, a snap-in fastener that attaches hoods to grilles “This product eliminates the screw in assembly process used by the OEM,” Windsor explains. “Also, assembly is accelerated by the snap-in trim clip design.”

In addition, there’s the one-piece expansion nut that replaces weld/clinch/pierce nuts used in pickup beds. The OEM weld/clinch process can be eliminated at the assembly plant, improving line rates and quality issues. The company explains that the expansion nut can be designed for sheet metal panels with a wide range of thickness, and it has an optional seal for dust/water intrusion.

Expanding Itself
In 1999, Tinnerman Palnut broadened its product line to include custom injection molded products and assemblies. Unlike most other suppliers, Tinnerman Palnut can custom design and manufacture specialized plastic fasteners as well as other molded parts such as precision gears, shafts, and small housings.

The company’s complex operations enable it to make more complicated parts. In this way, it helps its customers decrease the cost of their end product. “We continually work to drive cost out of the manufacturing process,” says Windsor. “Instead of having secondary operations we develop production methods that will complete two operations simultaneously.”

As quality is the priority for the company and its customers, its dies and machines are equipped with sensors to check critical dimensions. As far as problem solving, the company defines its staff as application assistance specialists. “We engineer creative and cost-effective application solutions for our customers. We can leverage our extensive line of existing engineered products to assist in this endeavor,” says Windsor.

Enduring Legacy
The company describes its growth as a combination of organics and acquisition. “The two plant acquisitions have provided growth, but we have also established new products to offer our customers,” says Windsor.

The company’s continued development, evolution, if you will, and healthy sales growth has made it a recognized leader in the field of engineered spring steel fastening and stamping industry. Tinnerman Palnut is proud of that reputation. Perhaps it’s even more proud of the integrity it established through quality improvements and customer satisfaction. Moreover, it must be extremely proud of the innate capacity for innovation that has endured from its founding until today.