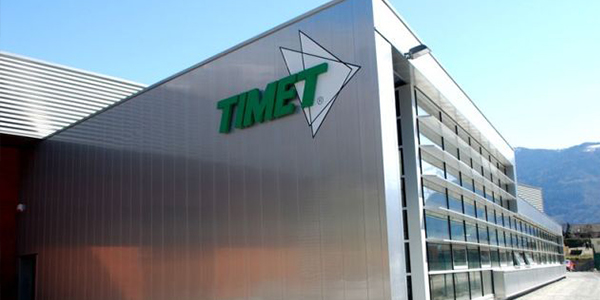 First, a few facts: titanium is corrosion resistant in many applications In which other materials fail. It is lighter and stronger than steel making it attractive for aerospace and industrial applications.

Another fact: TIMET was one of the pioneers of the commercial development of titanium and now is a world leader in titanium production. Many of the advanced titanium alloys used by the aerospace industry were invented by TIMET in the Company’s United States and United Kingdom research and development facilities. Employing state-of-the-art vacuum arc remelting (VAR) and electron beam cold-hearth remelting (EBCHR) technologies, TIMET has been recognized across the globe as one of the few companies with the manufacturing capacity and breadth of technology to supply the increased demand for titanium and its alloys.

With world headquarters in Denver, Colo., TIMET, with $486 million in 2001 sales, stands apart from the competition as a fully integrated producer of titanium in the United States. It was the first company specifically founded to produce titanium metal and has established a reputation as an industry leader in sponge, ingot and mill product manufacturing. It is the only titanium company with manufacturing operations in both the U.S. and Europe, and all of its mill products are manufactured under ISO 9002 qualified processes. The company holds a number of product and process patents that represent some of the industry’s most advanced technology.

Morgantown: Leading the Technology Curve
To produce melted products, titanium sponge and processed scrap are compacted and pressed into compacts, optionally welded together and then melted in either VAR or EBCHR (electron beam cold hearth remelting) furnaces or both. VAR is the more traditional method, in which an arc current remelts the electrode. Wanting to produce a higher purity ingot, TIMET pioneered the triple VAR melt process to meet the highest quality jet engine specifications.

TIMET’s electron beam cold-hearth remelting consists of a high-energy electron beam as a melt source coupled with a proprietary, C-shaped hearth that provides the flexibility for processing titanium into commercially pure titanium, commercial alloys or proprietary TIMET alloys. A highly sophisticated technique, the C-shape hearth allows higher density impurities to settle out as the molten metal travels through the hearth. The molten metal then is poured into a mold and forms an ingot or slab of purified titanium or alloy. “We can take loose sponge, compact it with scrap and put this into the EB, and then remelt it again in the VAR or hot roll the EB slab directly into flat mill products. The EB technology provides that flexibility,” explains Director of Global Procurement Bob Borowski. General Electric, he adds, became interested in the EB technology and encouraged TIMET to improve the process. Now GE mandates EBCHR followed by VAR for all ingots destined for aircraft engine components. “What we have pioneered with GE, others are now doing,” comments Vice President of Marketing Cary Veith.

The company’s Morgantown, Pa., operation serves as the focal point for its electron beam technology. The Morgantown operation was a part of Titanium Hearth Technologies (THT), which came under the TIMET umbrella as a wholly owned subsidiary in 1996. The THT acquisition also added a Vallejo, Calif., melt facility. The Morgantown plant consists of a 135,000-square-foot prep building, where sponge and scrap are cleaned and processed from raw material, and a melt shop of 100,000 square feet. The plant features three electron beam furnaces, two with 20 million pounds capacity each and one with five million pounds capacity as well as a VAR furnace.

“We are the only sponge producer in the United States, processing directly from ore, and we maintain a totally integrated scrap processing facility in Morgantown,” says Borowski, adding, “Our entry into GE came through Morgantown.”

In addition to this facility, TIMET maintains other operations in the United States. These include:
• Henderson, Nev. – sponge and VAR melting. TIMET’s sponge plant here was the first of its kind and now is one of the world’s most modern. It combines a 20-million-pound capacity, vacuum distillation process to assure a constant supply of the highest quality sponge. Henderson also has a VAR melt shop which combines with VAR melt shops in Morgantown, Pa., Witton, England, and Ugine, France to produce up to 65 million pounds of ingot annually. The Henderson plant also houses one of the most extensive research and development facilities in the industry.
• Toronto, Ohio – forging and rolling. Here, ingot is forged into billet, bar and block which meet the world’s highest quality standards. Slab is hot rolled to plate, sheet and coil products. Hot-rolled coil is subsequently cold rolled and annealed for finished strip, some of which is consumed by the company’s welded tube manufacturing joint venture, Valtimet, in which TIMET is a minority owner, with Vallourec Welded Tubes of France. Vallourec leads the world in the production of welded titanium tubing, with more than 400 million feet of thin wall condenser tubing installed since 1972. Valtimet purchases the majority of its titanium tube skelp from TIMET.
• Witton, England – melting and forging. Overseas, this plant purchases raw materials, including sponge, to feed VAR furnaces with 19 million pounds of annual capacity. The plant then forges ingot into billet for aerospace applications, and produces intermediate billet to be processed into bar at another facility in Wales, where hot rolled bar and fan blade plate are produced for jet engine and medical applications. With an annual capacity of eight million pounds, the Welsh plant is one of the world’s major suppliers of titanium bar and fan blade plate. TIMET’s Ugine, France facility purchases raw materials to melt five million pounds of VAR ingot a year, which is forged into both rotating and structural quality billet for aerospace applications.

TIMET’s service centers are strategically located in major aerospace, industrial and manufacturing hubs in the United States and Europe to ensure product and service availability on a responsive, regional basis. This network stocks the largest, off-the-shelf titanium inventory in the world and offers a host of value-added services, giving customers strong inventory, processing and cost advantages. It is staffed by dedicated professionals empowered to satisfy exact quantity, quality and delivery requirements.

New and Emerging Titanium Markets
With an airline industry that has trended downward since the 9/11 terrorist attacks, TIMET has been successful in seeking out applications outside of commercial aerospace for its titanium products.
• Automotive
One area in which titanium can displace other metals is automotive, particularly in the manufacture of springs and exhaust systems, Borowski comments. The Z06 Corvette, currently in production, as well as the new Lupo Volkswagen in production in Germany, are being produced with components made with TIMET’s titanium. “Titanium-made products are a good fit for automakers because they are lightweight, corrosion resistant and possess high strength,” says Veith, making its engineering properties highly attractive for the automotive industry.
• Oil & Gas / Energy
Titanium is attractive for use as stress and keel joints, riser pipe and other tubular oil country goods. Titanium possesses excellent resistance to saltwater corrosion and can withstand the high temperatures and corrosive conditions of crude oil production wells. It is weldable and machinable with conventional equipment. “Titanium has a lower elastic modulus than steel and this makes titanium preferable over steel for stress joints which have to absorb the dynamic wave and bending action of the entire riser pipe string from the platform to the seabed floor which can be thousands of feet,” says Veith.
• Armor and Armament
For armor applique, titanium offers good ballistic impact resistance, lighter weight and better corrosion resistance than steel. This provides better value in armoring personnel carriers, tanks and other ground combat vehicles. “TIMET’s EBCHR followed by direct mill processing provides a significant cost advantage for armor plate,” Veith points out. “We see titanium demand in the armor and armament sector growing over the next several years,” he adds.
• Architecture
Titanium is becoming the material of choice for many exterior applications, such as in the construction of the Guggenheim Museum in Bilbao, Spain. Its aesthetic appearance, corrosion resistance and high strength-to-weight ratio make it an ideal cladding material.
Even in the face of a commercial aerospace market that has been in decline, TIMET’s contribution to this and other industries deserves note. The company has achieved innovations in applications such as:
• Jet engines: TIMET is the world’s largest manufacturer of premium-quality billet and bar for critical jet engine rotating applications, holding approvals from all major engine manufacturers for every grade of titanium.
• Airframes: A large supplier to the airframe structural market, TIMETsupplies innovative alloys such as TIMETAL 10-2-3 and TIMETAL 21S to replace steel and nickel alloys in the Boeing 777 landing gear and nacelle applications, respectively. These substitutions enable airframe manufacturers to save weight and improve on aircraft efficiency.
• TIMET manufactures alloys for applications in industries ranging from power generation to chemical processing and desalination. Each titanium grade is tailored to specific conditions, emphasizing strength for different pressures, alloy content for different corrosive agents and ductility for different fabrication requirements.Emerging markets include:
nMedical: Titanium is completely inert to human body fluids, making it ideal for medical replacement structures such as hip and knee implants. Titanium actually allows bone growth to adhere to the implants.

World Class Technology
TIMET is proud of its world class melting technology, especially its electron beam melting. The electron beam melting had its beginnings with an individual who made a clever turn in the right direction and helped to engineer what eventually would become a global enterprise. THT was a garage operation begun 35 years ago as part of Axel Johnson Metals Company. Axel Johnson needed scrap from the United States and hired an individual in the U.S. to purchase the scrap and send it overseas. The overseas market reached a standstill, however, in the 1970s, when automotive applications began using more stainless steel scrap. He decided, instead, to go after titanium scrap because this metal also was being added to steel in the manufacture of automobiles. “He believed that titanium scrap would serve as good a purpose as steel,” Borowski explains. He set up a garage to package the titanium scrap, and then sent it to steel mills. As he developed expertise in this process, he eventually asked the Swedes to build an electron beam furnace for his facility, a technology improved and made more sophisticated through the years that eventually would catch the attention of giants such as General Electric.

As a proven leader in titanium production, TIMET has been able to garner the financial strength that allows the company to invest in capacity increases, technological advances and product and process improvements. TIMET will no doubt enhance its leadership position and partner with customers to expand existing titanium uses while nurturing new applications.

Here’s another fact: as the global demand for titanium accelerates, TIMET will continue to be one of the industry’s leaders.