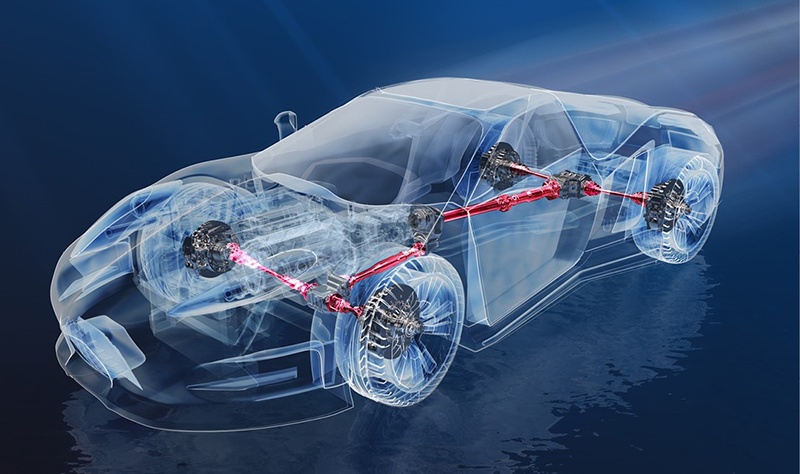 IFA North America is part of a German global auto supplier of prop shafts used in front-, rear- and all-wheel drive passenger cars and light commercial vehicles, for both combustion engine and hybrid drivetrains. Which is why you pronounce the company’s name as “eefa” rather than saying the letters: I.F.A.”

“It’s the German way to say it,” explains Dermot Kennedy, manager for site development. “But you can pronounce the name either way.”

In fact, the Charleston, South Carolina-based company has gone by a number of names since it first began making prop shafts back in 2002 as an independent equipment producer for what was then Daimler-Chrysler. It became Rotorion North America in 2009; after the IFA Group acquired its parent company, it was IFA Rotorion North America. Then it became simply IFA North America as part of the IFA Group’s recent rebranding to achieve consistentcy among its eight production and development site worldwide.

“Our first customer was Chrysler, then Ford and Mercedes and then we added GM and BMW as customers,” Kennedy recounts. “We started out making 200,000 units with 200 employees. Today we are eclipsing two million units with 600 employees. And with our new plant expansion, we expect to add another 120 employees with a new production line in building a new $69 million facility.”

Speaking of what’s in a name, what IFA makes is prop shafts, also called a drive shaft, propeller shaft or Cardan shaft. Whatever you want to call it, it is a mechanical component that transfers torque from a vehicle’s transmission to the axles.

“This is not an off-the-shelf product,” Kennedy emphasizes. “IFA produces a custom solution in close coordination with the OEM’s powertrain engineers and design team.” The car maker specifies the various interfaces to the transmission, the differential and the chassis, as well as a host of other variables, including the desired corrosion resistance and telescoping properties in the event of a crash.

IFA then designs the shaft from existing design kits for tubes and joints, simulates the shaft properties, builds samples, validates their durability and launches the new shaft design in mass production in close coordination with the customer. IFA maintains a sales and design office in Novi, Mich., a short drive from Detroit, as part of its commitment to work closely with the Big 3 manufacturers there.

“It’s an intense process,” Kennedy notes. “As with any Tier 1 supplier, we’re under constant pressure from our customers to keep prices low while still delivering the highest quality product. We accomplish this through effective management of our supply chain combined with constant continual process improvement in our manufacturing processes. Our objective is always to deliver the best product in the most efficient way that provides the best value to the company and our shareholders.”

To that end, IFA North America recently embarked on constructing a new 234,000 square foot-facility in nearby Summerville to make constant-velocity (CV) joints. Constant velocity joints utilize steel balls that travel in steel grooves to transmit uninterrupted and constant torque, even while the drive shaft flexes.

“These joints are a critical component of our prop shafts,” Kennedy explain. “By vertically integrating the manufacture of CV joints, we obtain greater control over our supply chain, which results in improved efficiencies and better quality control. Initially we’ll run separate production lines, but the long term goal is to bring all our manufacturing processes under one roof to achieve further gains in operational efficiency.” Integration of warehouse operations is expected in mid-2018, with step-by-step relocation of prop shaft assembly eventually resulting in 14 assembly lines will be up and running in a 400,000-square foot expandable plant.

CV joint manufacturing is scheduled to begin making production samples towards the middle of 2018, and go into full production by second quarter 2019. It represents a $69 million capital investment in an area that has become known as a thriving center for automotive manufacturers and its suppliers.

“There are two major auto plants in the immediate Charleston area,” Kennedy says. “So it’s a market that brings people to the area who are interested in working in manufacturing. Still, a lot of people don’t realize that manufacturing is actually a high-tech kind of job that aligns with modern day manufacturing processes. Four years ago we started an apprenticeship program to bring in people and develop the skill sets we need. We also work with the local schools and colleges, as well as the state’s economic jobs programs.”

Kennedy points out that IFA has a strong relationship with state and local authorities. The company has approved job development credits as well as a $150,000 grant towards site and infrastructure development. “It’s a two way relationship. We’re working with the community for job recruitment, but we also hope to give something back to the community as well by attracting people to live and work here,” he says.

As a Tier 1 supplier, IFA’s customers are primarily OEMs in the United States, Canada and Mexico. “We do a little bit of business in South America,” Kennedy says. “Our parent company’s philosophy is to be close to our cus tomers, which is why it has various production facilities in Europe and Asia. So we don’t do much international business because other units handle it. But if there’s a capacity issue in China and our production line is set up to match something they need, we can and do sometimes ship overseas.”

The auto industry as a whole is challenged to improve fuel efficiency, which is achieved in part through lighter weight materials. To that end, IFA uses high steel to make its prop shafts. “It allows us to make a thinner wall to reduce weight without compromising strength and durability,” Kennedy says. “There is trend towards the use of carbon fiber shafts, but mostly for high-end vehicles and sports cars. Unfortunately, carbon fiber isn’t ready for mass production; the balance between the cost of carbon fiber and what you might gain in fuel efficiency through lower weight just isn’t there yet.”

There, are however, more than one way to skin a prop shaft and make it perform better. “IFA offers products that eliminate the use of fasteners, which improves fit with less assembly required on the OEM production lines. Faster assembly can allow increased throughput,” Kennedy says.

He adds, “IFA is a company that represents over 60 years of design and manufacturing experience. We offer significant expertise to provide OEM customers with a customized component that’s key to safe and efficient vehicle operation. That’s been a major factor driving our continued growth.”