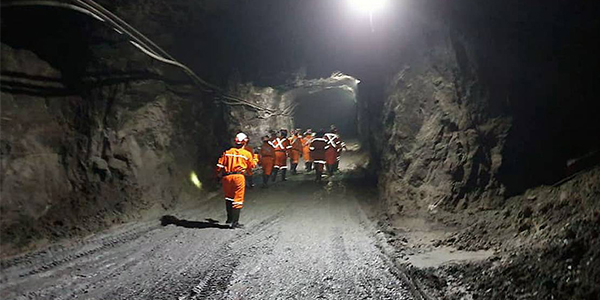 Mineras Sabinas, a mining company dedicated to the extraction of copper concentrate, lead concentrate (lead, silver and copper ores), and zinc concentrate (zinc and silver ores) is located in Zacatecas, at 126 kilometers from the capital of the state of Durango. The company is one of several divisions of Grupo Peñoles, a multicorporate group with integrated operations in smelting and refining non-ferrous metals, and producing chemicals. The conglomerate includes several mining, metal and chemical companies, performing exploration and supplying infrastructure for utility companies such as water and energy. Additional mining facilities include Fresnillo, the world’s richest silver mine; La Ciénega, Mexico’s richest gold mine; La Herradura, Mexico’s largest gold mine; Naica, the largest lead producing mine in Mexico; and Francisco I. Madero, Mexico’s largest zinc mine.
Peñoles is considered the world’s top producer of refined silver, which is currently reaching a 23-year high in world markets, with an increased value of 57 percent in the past year to $11 per ounce. The company is also a leading producer of metallic bismuth, used in bismuth alloys, and in pharmaceuticals and chemicals, ceramics, paints, catalysts, and a variety of minor applications, as well as in sodium sulfate. It is also the leading Latin American producer of refined gold, lead and zinc. Peñoles trades on the Mexican Stock Exchange since 1968 under the ticker PEÑOLES.

Founded in 1887, the group is part of Grupo BAL, a Mexican privately held diversified group of independent companies, well known for their ethics and solidity in the industrial, financial, commercial and higher education sectors. Grupo Bal also consists of Palacio de Hierro, Mexico’s most prestigious department store that offers its clients the most renowned national and international brands of products, and Grupo Nacional Provincial (GNP) a leading insurance company with almost 100 years of experience offering insurance policies, pensions, and health services, and forerunner in the insurance and pension market in Mexico.

ANCIENT HISTORY
“Although Peñoles started as a mining company in 1887, the veins were discovered in 1554 in an expedition to Zacatecas by Francisco de Ibarra, an expeditionary sent by the Spanish Viceroy Luis de Velazco. In November of 1554 the expedition discovered the ores of San Antonio, Tajo Airón, La Soledad, Veta Grande and San Pantaleón,” said Francisco Rodríguez, quality assessment and community relations coordinator.

In 1925, a company under the name of Compañía de Inversiones del Oro initiated extraction of gold and silver from one of the richest veins in the world, San Pantaleón, producing 500 tons per day of the precious metals. Due to administration problems, Compañía de Inversiones del Oro was sold to businessmen Anhert and Guzmán, and in 1995 became part of the Peñoles group.

The company exports one third of its production but mostly sells the remainder to Peñoles’ metallurgical division Met-Mex, the world’s fourth largest complex in its segment and the largest producer of refined silver and metallic bismuth, to be processed. “We only export copper concentrate because Peñoles does not have copper smelting capabilities,” explained Rodríguez. Main clients are Transfigura, a Mexican transnational corporation, Glencore, from the U.S., and Transmine, a global corporation based in France.

The copper market is very competitive, according to Rodríguez, and companies such as Codelco from Chile, BHP Billiton Group from Australia and Phelps Dodge Corporation from the US are among the top players. Also, the Asian market is growing in this segment.

However, the Sabinas reserve is significant. In the last five to eight years, the company’s exponential growth surpassed 1,000 percent in content produced. “This growth has been possible due to major investment in new technology Peñoles acquired for Sabinas, a company owned 100 percent by the group,” he said.

The technology used for the extraction process in this case is pyrometallurgical. The ore concentrate containing lead, zinc or both is fed to sintering machines. Lead concentrations vary from 50 to 70 percent while sulfur content of sulfidic ores can reach up to 20 percent. Zinc concentration is usually 40 to 60 percent with sulfur content of 20 to 30 percent. When the ore is mixed in lead and zinc, the concentrate is usually lower for both. A blast of hot air or oxygen oxidizes the sulfur, which becomes sulfur dioxide (SO2) and it is sent to an acid plant.

Next, the metals are introduced to blast furnaces for reduction and refining of compounds. Before undergoing refining operations, rough lead bullion usually requires treatment in kettles. When lead bullion is refined with pyrometallurgical methods, additional materials are removed such as silver, bismuth, zinc and other metal oxides. Lead refining might take several stages depending on the degree of purity pursued. Smelting processes include QLS, Kivcet, AUSMELT and TBRC.

According to Rodríguez, Grupo Peñoles has a high degree of concern about the electromechanical integrity and continuity of operations in every mine, while making rational use of energy sources. All Peñoles plants are 2004 ISO:14000-certified from the International Standards Organization, and has also an Industria Limpia Clean Industry certification from the Mexican ministry for environmental protection through PROFEPA – Procuradoría Federal de Protección Ambiental. “The company has an investment dynamic close to $10 million yearly focusing on safety and processes, and to improve the quality of life of its workers, which is becoming a big magnet for people to work at Sabinas,” Rodríguez said.

TAKING CARE OF BUSINESS
With 328 union and 64 regular employees, Sabinas has specific safety projects on the way to take care of its labor force. The company has purchased an underground refuge and four more will be acquired to be placed in strategic places. Each refuge can hold 30 to 35 people in case of an accidental crumbling. In addition to personal protective equipment, the company has also acquired equipment that flings concrete to reduce collapses and stabilize the grounds. The company has had a very low accident average in the past three years with less than 10 small reported accidents per year, except for this year when a fatality occurred in March. “This type of accident is very infrequent, so much so that Peñoles has been awarded four years in a row the Social Responsibility Recognition from Mexico City in appreciation of its community involvement. This award was presented by President Fox,” he explained.

The company not only offers improved safety, higher salaries and best social and health benefits but also stresses the educational quality of its workforce. The courses offered range from literacy classes to professional training. The company also sends 200 workers’ children per month to visit Zacatecas museums, chaperoned by teachers and parents. “Sabinas feeds its labor force from three locations: La Noria de San Pantaleón, San Martín and Sombrerete, comprised by around 28,000 people. In recognition of our community involvement, the governor of Zacatecas Amalia García Medina presented us with an award to our programs promoting the region’s educational quality,” explained Rodríguez.

These actions are just part of Peñoles’ policies regarding the communities surrounding its plants. The group also encourages the participation with families, associations, authorities and institutions to pursue communities’ self-development, improve life quality, and develop true teamwork.

Operating in nine states, Peñoles interacts with 64 communities through participation in action boards, welfare centers and volunteer networks. “Peñoles Comprehensive Business Administration System, a community development initiative, has been recognized by multiple organizations and governmental agencies for its concern about workers, their families, and all those that are part of our Peñoles extended family,” he concluded.