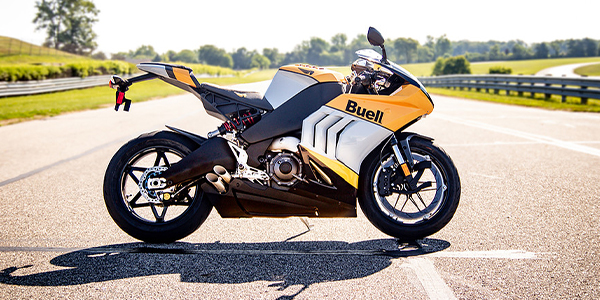 The story of Buell Motorcycle Company, Inc. has been deemed one of the most compelling in the motorcycling industry, and founder Erik Buell enjoys a reputation as one of the great innovators. His achievements resulted in recent official honors and personal accolades both well deserved and distinctive. In 2002, Buell, the company’s current chairman and chief technical officer, was inducted into the National Motorcycle Hall of Fame. Further, the name of the street on which his company is located was changed to Buell Drive. These recognitions serve as a testament to his vision and subsequent accomplishments.

Still, Buell readily gives credit to current staff. When Buell founded the company in 1987, it was essentially a “one man band” operation housed in a single garage. Today, the East Troy, Wis.-based company, which designs and builds motorcycles for worldwide distribution, has 186 employees who work in four buildings and demonstrate a diversity of skills. They share his ambition and complement his vision.

Seed of Innovation
But it can’t be denied that Buell’s passion provided the foundation. Often, when highly driven people reach a certain level of accomplishment, there’s a tendency to try and find the “Rosebud” that drove the success. The Rosebud is, of course, a life-defining moment or a highly symbolic object that, if and when it’s uncovered, reveals much to the public. For “Charles Foster Kane” (Orson Welles’ cinematic alter-ego), the Rosebud was a sled ripped from his hands when he was a child. For Buell, too, the Rosebud could be personified by a sled – or a bicycle, or car, horse, tractor or, basically, anything that supplied a rider with motion. During the 1950s, when Buell was growing up on a farm in rustic Gibsonia, in Western, Pa., he developed a fondness for any kind of device that could lift him off of his feet and take him somewhere. One day, this interest became fixated on motorcycles, which seemed to Buell, as he once remarked, like a sled and car combined. After he took his first ride, he was hooked, and his future direction was cemented. The passion became all encompassing. As he got older, Buell not only rode motorcycles; he raced them in competitions. But, as it turned out, he wasn’t merely content to ride. He wanted to build motorcycles, too.

Developing Design Concepts
Buell’s involvement on the production side began in 1979, when he joined Harley-Davidson, the famed motorcycle manufacturing company, as a junior test engineer. With the company, he gained valuable experience with chassis testing and design that he’d later expand upon and refine, much to his future company’s benefit.

In 1983, seeking to branch out and design his own bikes, Buell left Harley-Davidson. But he encountered substantial obstacles. His first project entailed developing a two-stroke AMA Formula One racer called the RW750. A lot of his time, money and love went into the bike, but his dreams appeared dashed when the American Motorcyclist Association eliminated the Formula One road racing class. This move essentially made his bike obsolete before it even got out of the gate.

Obviously, the development was devastating, as it left Buell without a market. However, instead of surrendering to the situation, he picked up the pieces and started another project: designing a road racing bike that would include a Harley engine. It was a very practical move, as no motorcycle racing organization could legislate the elimination of a street bike category. “It was a brutal lesson,” recalls Buell about his early business experience. “As I had started out to build a pure race bike, the AMA nearly put me out of business. Around 1985, I started a project that involved building a high-performance street motorcycle. The idea was to make great street motorcycles but not be trapped by a race organization again.”

The Harley-Davidson Connection
Buell had already developed a reliable chassis with good suspension and brakes. All he needed now as the proper engine. For that, he turned to his former employer, Harley-Davidson. In 1985, Buell integrated the Harley-Davidson XR1000 engine to his chassis and built the RR1000 model, a bike that created a sensation with its innovative, streamlined design. The result was a bike attractive to sport riders, as it provided excellent handling capabilities.

At this point, Buell established a business relationship with Harley-Davidson to purchase engines, and he sold his bikes through the company’s dealers. From there, Buell introduced the RR1200 and RS1200 motorcycles, which were also equipped with Harley-Davidson engines. In particular, the 1989 introduction of the RS1200 featured a unique, pared down bodywork design that showed off the chassis parts and engine.

Soon, Harley-Davidson began investing in his company. In 1993, it acquired 49 percent of Buell Motorcycle Company, Inc. “Harley had told me that they were interested in what I was doing, as they never had been involved in the sport bike business,” says Buell. “But now they wanted to build a new bike around the same concepts I had used before, but with a little better funding. That is what really got me started.”

In 1998, Harley-Davidson acquired another 49 percent of Buell Motorcycle. By 2003, it bought the remaining 2 percent. As a result, Buell became a wholly-owned subsidiary. But, more importantly, as Buell indicated, the long-established motorcycle company financed Buell’s vision, enabling him to develop some of the most innovative models. Essentially, Buell sought to develop a product that is “streetwise”; that is, it would boast a tighter design for better handling. In doing so, he focused on the customer. “Our focus didn’t target anyone else’s product,” he says. “Rather, we targeted different customer mindsets with a different kind of motorcycle. Instead of copying what other people were doing, we developed our own kind of product, and it has been working for us.”

Enlarged Facilities
In the process, Buell not only developed an innovative product but an impressive organization as well. Today, the Buell Motorcycle Company facilities include two modern and efficient 40,000-square-foot industrial buildings in East Troy. Inside, communication and methodology are key components. “We strive to make the place work so that it seems that we’re all in the same room,” explains Buell. “We’ve invested a lot in our methodology and our communication tools. The payoff is that we now have the highest quality of any Harley-Davidson product line, and that is no small feat, because Harley-Davidson is very good. It has paid off for us, and it has paid off for them.”

At these facilities, Buell’s staff develops motorcycles based on Buell’s chassis concept. “We have an incredibly exciting, new product line based on the innovative chassis concept we came out with in 2002 called the XB series. It replaced the tube frame Buell twin chassis, which is the core design I had built in 1985. That was itself very innovative in 1985, but by 2002, it was a chassis that lasted for 17 years, unheard of for a sport bike. So, in 2002, it was time for something radically new. Now all our twin cylinder bikes use that chassis technology.”

Expanding Product Line
In 2006, Buell Motorcycle Company is extending its product line with the introduction of two new models, the Ulysses XB12X Adventure Sportbike and the Lightning Long XB12Ss, which is a longer version of the company’s original Lightning XB12S, now designed for bigger and taller riders, maximizing their comfort.

In all, the 2006 product line features eight models. Along with the new Ulysses and Lightning models, it features the Firebolt XB9R and Firebolt XB12R sportfighters; other members of the Lightning family of streetfighters, including the Lightning CityX XB9SX, the Lightning XB12S, and the Lightning XB12Scg; and the Buell Blast. According to Buell, with the expanded line, the company takes its proven XB platform into new directions, providing products that will appeal to even more riders. The Ulysses XB12X features a long-travel suspension and aggressive tires designed to offer outstanding performance on both paved and unpaved roads. “With the Ulysses model, we’ve produced a true sport adventure bike,” says Buell. “It was a bit of a surprise for people, because they didn’t expect us to go in that direction, but it has gotten us rave reviews, and it is the best selling product we have. We are sold out of them in a lot of markets. In Australia, we are sold out of our entire allocation for the 2006 model year.” As for the Lightning, the long XB 12Ss has a larger frame and extended swingarm stretch that gives the model a more relaxed profile as well as a cockpit better suited to taller riders.

In addition, all Buell XB models benefit from the design changes that include a new swingarm design, a new transmission with a lighter clutch and stronger belt, and a new air intake system. Technical upgrades in the Lightning models include a lighter, stiffer swingarm design as well as a smoother-shifting transmission.

Leading the Pack
High efficiency typifies Buell models, and its motorcycles are unique in the industry. “Our bikes are very different than anyone else’s,” says Buell. “We focus on having one part do two or three jobs, so the parts content on our motorcycles is very low. A lot of thought, invention, time and forward thinking go into each part, because you have to think about how each part will be used and about its life cycle.”

Initial costs involved in such an approach may be more expensive, but the payoff is greater, Buell indicates. “Initially, it costs more, but you get a huge payoff in quality because you have fewer parts to track, less things that may go wrong, and less suppliers to manage. Some of our competitors have twice as many parts as ours to do the same job,” he says.
By focusing more on customers rather than horsepower, Buell Motorcycle Company has taken the industry lead as far as handling capabilities, which is precisely the direction Erik Buell wanted to go. Now, other companies are following his lead.