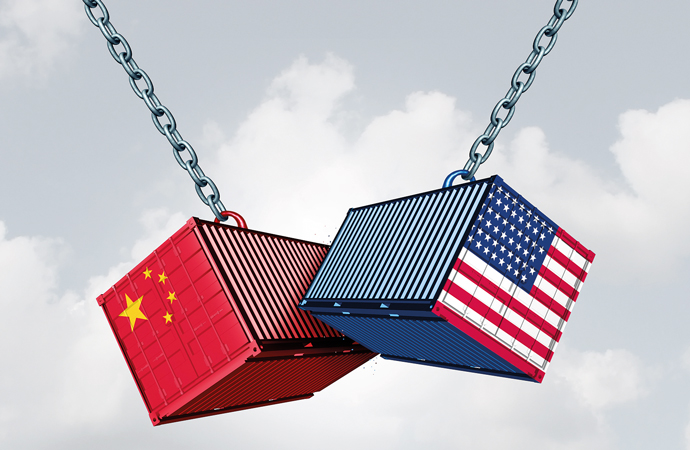 After a roughly month-long shutdown-related delay, the latest U.S. monthly trade figures were finally released this morning – bringing the story up only through November. But although they’re clearly somewhat dated (especially considering how fast China trade-related events are moving), they reveal some noteworthy China-related developments and point to some equally noteworthy potential China-related trends.

The new trade report makes clear that, at least through November, President Trump’s tariffs, and possibly the threat of more, are influencing trade flows. And there’s even some evidence that, although the U.S. bilateral goods deficit that so bothers Mr. Trump is moving in the wrong direction, the underlying trends are much more favorable. Here’s what I mean.

It’s true that, on a year-to-date basis, the American goods deficit with China is up considerably. In fact, the 10.90 percent widening of this gap during this period is the biggest since the same period between 2010 and 2011 – when the U.S. economy was conclusively moving out of recession, and the deficit jumped by 22.38 percent.

But the November monthly figures point to a more complicated picture, especially keeping in mind that two big sets of U.S. tariffs have been imposed on goods imports from China since last July.

For example, despite widespread reports of tariff “front-running” late last year aiming at avoiding future levies, the U.S. merchandise trade deficit fell on a monthly basis by 12.16 percent – from $43.01 billion in October to $37.86 billion. Yes, the October trade gap represented the fourth straight monthly record high. But the November drop was the biggest overall since last February’s 18.61 percent. And the November total was the lowest since August’s $38.57 billion.

Moreover, because U.S.-China trade is so seasonal (think, in large measure, “Christmas”), it’s instructive to compare last November’s results with its most recent predecessors. And this exercise reveals that the sequential deficit decline was the biggest November monthly decrease since recessionary 2008’s 17.41 percent.

A similar pattern emerges for exports. America’s goods sales to China in November fell sequentially by 5.10 percent, from $9.13 billion to $8.66 billion. That’s the lowest such level since May, 2016 ($8.54 billion) and the lowest November level since recessionary, 2009 ($7.37 billion). And the monthly November merchandise deficit decrease was the biggest since recessionary 2008’s 14.83 percent. Interestingly, though, last November’s monthly export drop was smaller than October’s (6.73 percent).

Goods imports from China were off markedly as well – by 10.93 percent sequentially in November, from October’s all-time high of $52.23 billion. The $46.53 billion November total was the lowest since last July’s $47.10 billion.

In addition, the monthly decrease was the biggest since last February’s 14.68 percent, and the biggest November fall-off since 2008 (16.95 percent).

But U.S. policy’s effectiveness can’t accurately be evaluated unless the China trade flows are examined in the context of broader American economic trends and in particular manufacturing trends – since bilateral trade flows are so manufacturing-heavy. And what the key numbers suggest is that, even though the merchandise deficit with China has grown rapidly and indeed is heading for an all-time annual record, American industry is starting to reduce its dependence on Chinese parts, components, and other inputs.

The main evidence is the relationship between the growth of U.S. manufacturing production on the one hand, and the growth of U.S. goods imports from China on the other. If the resulting ratio is rising, then so is that U.S. dependence. If it’s falling, the reverse would seem to be true. So here are those figures for the first eleven months of each year going back to 2010-11, when the current U.S. economic recovery finally showed some real legs. (Incidentally, RealityChek regular may recall a similar exercise last November regarding American manufacturing’s growth and the global manufacturing trade deficit.)

2014-15: the deficit fell by 7.21 percent while manufacturing shrank an inflation-adjusted 2.02 percent

According to the above table, U.S. manufacturing’s dependence on Chinese inputs has grown faster between the first eleven months of 2016-17 and the first eleven months of 2017-18. But the latest year-to-date results are much lower than those for 2010-11. And this year’s numbers are probably also inflated by that tariff front-running. We’ll know more as the figures for the next few months come in, but with the possibilities live both of tariffs going up and coming off, definitive conclusions still look pretty far off.