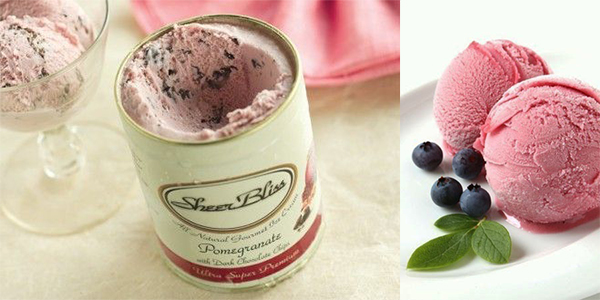 Most people can think of myriad storage or other uses for used tin cans. Now these cans have a worthy use in the packaging of SheerBliss Ice Cream.

The company’s ice cream comes packaged in metal cans, which offers many advantages, according to Gary A. Barron, President of the Hallandale Beach, Fla.-based company.

“Packaging in metal cans maintains the integrity of the product,” Barron says. He adds that most ice cream brands on the shelf are packaged in waxed cardboard, which is a paper product and, as such, is porous. “Air seeps into that type of packaging, and changes the dynamics of the ice cream,” Barron relates. “It causes the ice cream to get ice crystals on it, or the ice cream can get a gummy, dehydrated look. It’s what I call the `King Tut look’,” he says. Barron believes that if a buyer opens ice cream and then puts the unused portion back in the freezer for a few days, the ice cream should look the same as it did when it was first opened. Metal packaging allows this to happen for SheerBliss flavors.

“I’m amazed at the calls we’re getting from consumers about this packaging,” Barron adds. He received a call from one man who said that he uses SheerBliss tins for storage at his workbench now, since many coffee distributors seem to be changing from tin cans to vacuum-packed bags. However, the one that means the most to him came from a woman who had saved several tins. Prior to the Hurricane Wilma, the woman filled the tins with water and froze them. When she lost power during the hurricane, she used the frozen tins to keep the contents of her freezer frozen until the power was restored. “You wouldn’t believe the smile on my face when I heard that our product packaging could really help someone in their time of need,” he says.

SheerBliss’ packaging has garnered attention from the industry, as well, coming in as a finalist at the New York Fancy Food Show in Manhattan in July of 2005.

Barron refers to what he calls the “wow factor” when SheerBliss reached shelves. “It went on the shelves up against products almost exclusively packaged in waxed cardboard containers, and it gave people something to pause and take a look at. That’s where the `wow’ comes in,” he says.

Barron is thrilled that the “wow factor” continues when people open the can, and is especially happy that the company’s new flavor, pomegranate, has been such a hit.

According to the company’s Web site, pomegranates are known as symbols of health, fertility and rebirth. Some cultures believed they held mystical healing powers. Over the years, they have been the subject of myth, legends and works of art. They are touted for their high antioxidant content, health benefits, sweet-tart flavor and versatility. The fruits, which are perfect for eating, juicing or cooking, are filled with juice, nectar and an edible seed. Barron is thrilled with the success this new flavor has provided for his company. “We introduced a flavor that has never been produced in ice cream, and we’re seeing people go wild over it,” Barron says. “It’s definitely captured the attention of the masses.”

SheerBliss has its corporate offices in Hallandale Beach, Fla., and has two production facilities, one in Irvine, Calif. and the other in North Springfield, Vt. The product is new to the marketplace, with the company beginning in April of 2005. “There were four of us who came together from other businesses and decided to form this new venture,” Barron explains. “We spent the past year doing a great deal of research and development work, building upon work we’d done in the past and taking the advances we made during that time to the next level. That is how SheerBliss was born.” Even the name was decided on by all of the partners. “We worked with a friend who came up with about three dozen names. We looked them all over, and when `SheerBliss’ was suggested, we knew we didn’t have to look any further. That was just the one,” Barron recalls.

SheerBliss products are currently available in the New York tri-state area and in southern California. “We just completed our initial product roll-out with Eskimo Pie as our distributor,” Barron offers. “We are in the process of putting together a national distribution network to fulfill nationwide demand.”

While Barron notes that it’s too early to predict market share, with Sheer Bliss being so new, if the lines at trade shows and the “buzz” he’s hearing are any indication, he sees a bright future for the company.

One of the big surprises Barron and his partners found after the rollout was that the product was being viewed as a gourmet store item. “We soon came to realize that SheerBliss products have tremendous value at all levels. So we’ve modified our business plan to take all markets into account.”

Barron credits cable television’s Food Network with some of that success. “Our original approach was to address a marketplace that is constantly changing, craving new flavors,” he says. “With the Food Network’s audience growing daily, the consumer’s education and level of sophistication is also growing daily. Buyers are becoming more educated in hearing of new quality products and ingredients that were not the norm, even in the past five years. We’ve piggybacked with that knowledge. I tip my hat to the Food Network for raising the level of food consciousness in consumers.”

As SheerBliss forges into the future, he and his three partners (Sean Cavandi, Siroos Asbaghi and Ron Prupis) intend to keep touting the uniqueness of the can, the quality of the ingredients, and the fact that consumers can’t just go anywhere to get pomegranate ice cream as the main selling points. “We know people want our product. I’ve been hearing that people are bringing tins of our ice cream to dinner parties as hostess gifts, rather than the traditional bottle of wine or box of candy. To me, that speaks volumes.”