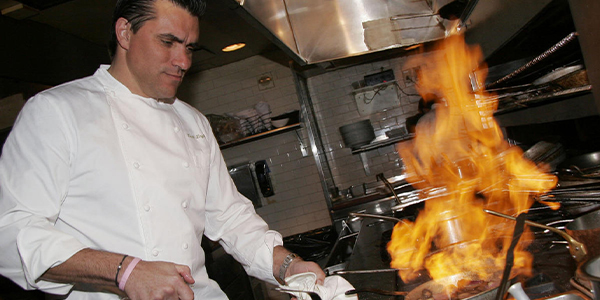 Don’t let the name fool you. This English is Italian. “It’s the classic story,” English says of his upbringing. “My mother’s side is Italian. I grew up with that as my basis. My grandmother was always cooking. My great grandmother and grandmother are from Calabria and my other grandmother is from Sicily.”

From an early age English was interested in cooking. “I always loved it. My mother told me that when I was nine I asked for an ice cream maker. But you have to understand I grew up in the `60s and `70s and it wasn’t cool to be a chef nor did anyone think of it as a career. Especially on the level it is today.”

Fortunately many people have acquired a taste for fine food and that has made celebrities out of chefs once again (as they were in centuries past). “I always had been very passionate about (cooking) and figured I could have a career at it,” English says. “It turned into what it is and I am having the time of my life.”

What it has turned into is a stellar career as an award-winning chef, restaurateur, cookbook author, and television personality. Todd English is highly decorated chef with innumerable awards and honors. He has been recognized by several of the food industry’s most prestigious publications, published three critically acclaimed cookbooks, and has become a well-recognized television figure. One look at him and you’ll see why he has also been on the list of People magazine’s “50 Most Beautiful People.”

With eight different restaurants (and counting) and many of those with multiple locations, English has turned his unique interpretation of classic Italian cuisine into a dining experience savored around the U.S. and beyond.

“The Todd English flavor is really about bold, refined, rustic taste. Layers of components that combine in many different textures, flavors, and temperatures is a big part of it as well,” he says. “Food is very sensual if you look at it that way and you really can emphasize that sensuous experience. I think of it as having bites or morsels of food that just make you go `Wow! That is amazing.'”

Originally opened in 1989 as a 50-seat storefront restaurant, Olives is known for its rustic yet cultivated Mediterranean cuisine. “There’s a very warm feeling. It reflects the food,” English says of the popular spots. On the menu at Olives, for starters, try the beef carppaccio salad, or perhaps the Parmesan polenta, baby mixed greens, cippiolini onions and garlic aioli. Another creative appetizer is yellowfin tuna tartare paired with spun cucumber salad, crispy rock shrimp, warm sesame dressing and whitefish caviar.

The World Is Flat

Brick oven flatbreads are among English’s signature dishes at Olives and other eateries. “It’s basically pizza but we do it in a different, more elegant way,” he says. A glance at Olives’ menu shows sumptuous pizzas including a fig and prosciutto flatbread with rosemary crust, sweet and sour fig jam, gorgonzola cheese and prosciutto de Parma. Another example features toppings of spicy chicken sausage with herbed ricotta, balsamic onions and roasted tomato sauce.

Open the menu at Figs to choose from a cornucopia of starters, pizzas, pastas and entrees. Who could resist an appetizer of crispy fried buttermilk calamari with faro tabbouleh, chopped romaine and Calabrese aioli? The dinner menu includes favorites like old school Tuscan Bolognese of tagliatelle tossed in a fontina burro fuso with grated Parmesan cheese; roasted salmon with orzo, peas, fresh basil pesto, pea tendrils and a warm shrimp vinaigrette; and Parmesan pappardelle-a tomato braised veal,ÿegg noodles, Parmesan granaÿand broccoli rabe, among many other dishes.

English first entered the doors of a professional kitchen at age 15. By 20, he attended the CIA, graduating with honors in 1982. He continued to expand his horizons working with mentors including Jean Jacques Rachou at New York’s La Cote Basque. He then moved to Italy and apprenticed at the Dal Pescatore in Canto Sull O’lio and at Paraccuchi in Locando D’Angello. In Italy, drawing from his Southern Italian heritage, he developed his unique style and approach to cooking.

At 25 he returned to the United States and became the executive chef of the award-winning Northern Italian restaurant Michela’s in Cambridge, Mass. He served there for three years, garnering high praise from both the press and public.

A career highlight came in 1991, when the James Beard Foundation named English their National Rising Star Chef. The Foundation subsequently named him Best Chef in the Northeast in 1994. He was also one of the “Top 50 Tastemakers” in 1999 in Nation’s Restaurant News. In 2001, English was named Bon Appetit’s Restaurateur of the Year. In 2004 English was named to the James Beard Foundation’s “Who’s Who in Food and Beverage in America.”

Like English himself, his restaurants have received numerous accolades. The original Olives opened to immediate acclaim and was voted Best New Restaurant by Boston Magazine. Since then, it has been honored as Best Food and Top Table by Gourmet Magazine and is consistently named Boston’s number one, favorite restaurant by Zagat. Figs was given the “Hot Concept” award from Nation’s Restaurant News.

English’s cookbooks are The Olives Table, and The Figs Table along with The Olives Dessert Table, published by Simon & Schuster. Another book is in the works. “The whole idea is a lifestyle book based on cooking,” he says of the project. “Food is a very big part of our life and consumers are driving that now. People want to feel good about what they eat. So we’re taking those components and bringing them down.”

DVDs, multi-media and more online content at www.ToddEnglish.com are also works in progress. Merchandising is another part of the business plan. The Todd English collection of Mediterranean-inspired cookware, small appliances and accessories are sold on the Home Shopping Network. The line offers great prices on items like anodized cookware, a 40-piece set of Tuscan dinnerware, olive wood implements, an ingenious wine cooling scepter, or panini saut‚ pan to name a few.

English also prides himself on community involvement with several local and national charities including Big Brother, the Anthony Spinazzola Foundation, Community Servings, Share Our Strength, the Boys and Girls Clubs, and City Year.

In addition to Olives and Figs, English’s restaurants include a number of unique locations like Todd English’s Fish Club in the Seattle Marriott Waterfront, with a cuisine inspired by the fishing traditions of the Mediterranean. “Fish Club is really about being a nice, trattoria of fish or fish bistro, and it really does reflect that from the standpoint that it’s a casual, fun, elegant place within a Marriott,” English says. Fish Club’s menu showcases Seattle’s abundance of exceptional local seafood, produce, and top wines. For instance, menu selections include wild Alaskan salmon with silky pea butter sauce, crispy crab and English pea cake, pea shoot and roasted baby beet salad; or Paella verde with Maine lobster, shrimp, Penn Cove mussels, Manila clams, chicken, chorizo sausage and charred salsa verde.

English often borrows from other cuisines such as Spanish and Latin American to round out his culinary repertoire. “It’s simple yet complex in how many different combinations you can put on the plate,” he says of menu planning. “I often say I’ve got my college degree from the CIA [Culinary Institute of America] but now I’m working on my Ph.D. and it will never end. I just continue to learn new things and that’s what I love about it.”

Each of English’s singular restaurants is a gem, such as Tuscany, set in the Mohegan Sun Casino in Connecticut. “Tuscany is somewhat classic in approach with amazing interpretations of great classic dishes,” English says. “Our philosophy is about not straying too far from classics but giving new twists and new looks on what that is. That’s important.”

The lunch menu includes his famous flatbreads among dozens of appetizers and dishes. The Tuscan style flatbread is made with proscuitto, fontina, gorgonzola, fig jam and rosemary herb. “Never trust a round pizza,” English says of the provincial fare.

Bonfire is English’s steakhouse in Boston’s Park Plaza Hotel, a celebration of ranch cooking around the world from the U.S. to Australia. “Bonfire is a very sexy steakhouse, comfortable for the ladies to go. It demasculinizes steakhouses,” he says. The cuisine fuses Argentinean, European and American steakhouse influences with other grilling traditions from across the globe. The restaurant also boasts a taqueria serving delicious assortments of tacos and tapas.

KingFish Hall was English’s first seafood concept, located in Boston’s historic Faneuil Hall. It was named “Best of Boston” by Travel and Leisure Magazine. “Kingfish is the new wave of fish cooking in New England. It’s eclectic in the sense that it incorporates what we know as local indigenous cooking. We use a lot of the local fish but go beyond the borders of New England to neighborhoods that inspire us with food that is of other cultures and countries.” Menu items include a Thai bouillabaisse incorporating Maine red fish, P.E.I. mussels, Littlenecks, sweet shrimp, lobster curry broth, Chinese eggplant, julienne carrots, and sesame crouton. Another selection is the spit roasted seafood skewer with swordfish, shrimp, scallop and chorizo, saffron potato salad and mustard aioli.

Future restaurants are being established in New Orleans and Biloxi, Miss., through projects that have been planned well before the recent floods ravaged those communities. “I am happy about (the investment). New Orleans is going to come back and be better than ever!” he predicts.

The goal for guests at his restaurants is not complicated, as English explains. “It’s simple. It’s about people and having a good time. They might not necessarily know tangibly what’s great about the night; yes good food and good service. But they have a good feeling and that’s what I want, that people want to do that again.”