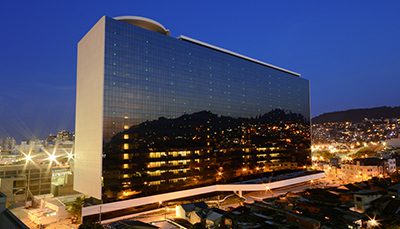 This year, HTB commemorated 50 years of activity in Brazil’s construction market by bucking both tradition and trends. With regards to the former, the company underwent a name change; from Hochtief do Brasil to HTB. In terms of the latter, it racked up historic growth rates amidst one of the greatest economic depressions and political crises that Brazil – and Brazil’s construction segment – has ever experienced.

Moving up through the Ranks

Over the last 12 months, Brazil’s epic corruption and money laundering scandal known as the Lava Jato (Car Wash) Operation has brought down the country’s president, Dilma Rousseff, and her Workers Party government, while placing major figures from every political party under investigation – and even sending some to prison. The still ongoing criminal investigation involves politicians and executives from the national oil giant, Petrobras, accused of accepting bribes in return for awarding contracts to major construction firms at inflated prices.

That this political meltdown has been accompanied by Brazil plunging into the worst economic recession in the last century would seem to spell economic disaster for a construction firm such as HTB. And yet, in 2015, the company’s net income was R$1 billion (roughly US$300 million) and this year’s contracts promise yields of over R$1.1 billion (US$330 million).

“The crisis is very severe,” admits HTB president, Detlef Dralle. “In terms of the civil construction segment, it’s now lasted for four years. And yet during this time of crisis, we’ve had our best results ever.”

Dralle explains that Brazil’s civil construction segment consists of three major groups of players. Traditionally, a handful of top ranked giants have dominated, vying for major government contracts involving infrastructure and other public works. A second tier of major players has focused on project development – primarily residential – that they finance and undertake themselves for their own clients. Meanwhile, HTB has belonged to a third group of smaller companies, offering engineering, development, and post-construction solutions for third-parties in the private sector.

Over the years, the company has always been ranked among the top three players in this group, and between 15th and 20th place in the construction segment overall. However, Brazil’s ongoing crisis changes everything – not only now, but looking ahead to the future. Explains Dralle: “As a consequence of Lava Jato, the major construction firms entangled in the corruption scandal will disappear from the ranking as will many of the weakened second tier firms whose business has decreased due to the economic crisis. At the same time, we’ve risen considerably; last year, we came within being ranked 14th, and we expect this trend to continue.”

If current political and economic woes have provided a lucrative silver lining for HTB, the company’s recent growth is based on far more than the mishaps and misfortunes of its competitors. With the precarious state of both the economy and the construction segment, now more than ever, the market is desperate for large solid construction firms with strong performance records and risk-free guarantees. HTB not only boasts half a century of experience in the marketplace, but sound German origins that sweeten the deal considerably.

Indeed, when the company first set down roots in Brazil in 1966 Hochtief AG arrived in Brazil as a consultant for the construction of the hydroelectric dams of Capivari, Cachoeira, and Salto-Funil, in São Paulo state. With the project’s successful completion, the group decided to set down permanent roots as a subsidiary known as Hochtief do Brasil, renamed HTB, headquartered in São Paulo.

In 1968, the company made its first forays into Brazil’s booming industrial sector with the expansion of Volkswagen’s plant in São Bernardo do Campo, São Paulo and the building of a new Volkwagen plant in the nearby city of Taubaté. Hochtief’s first decade in Brazil coincided with a period known as the Economic Miracle, during which the country’s GDP grew by annual rates of up to 10 percent. Major infrastructure projects and construction opportunities proliferated; by 1976, the company boasted a work force of 2,500 people and a client roster that included Volkwagen, Mercedes-Benz, Walita, Siemens, Caterpillar, and Usina Central do Paraná, at the time the largest producer of sugar cane alcohol in Brazil.

When the Economic Miracle went bust, and debts soared, HTB remained on the solid footing for which it would become reputed. Unlike many of its competitors that retracted or folded, the company expanded into new market segments, beginning in 1978 with the construction of a bank headquarters. Throughout the 1980s, Brazil’s turbulent times continued with the transition from the country’s military regime to democracy and the arrival of soaring inflation rates that hovered annually between three to four digits well into the early ‘90s.

However, HTB’s corporate commitment to economic austerity saw the company thrive as it continued to branch out into new segments including shopping malls, hospitals, schools, hotels, residential and office buildings, distribution and data centers throughout the Brazilian South-East, South, and Central-West (today, apart from its São Paulo headquarters, HTB has offices in Rio de Janeiro, Belo Horizonte, and Porto Alegre). Along the way, the company earned accolades as one of the most admired companies in the nation as well as one of the most cutting-edge due to its in-house development of sustainable technologies applied to green buildings such as the pioneering Eco Berrini, in São Paulo, launched in 2008. During this time, Hochtief AG put its Brazilian affiliate up for sale. It was purchased in 2009 by another German firm, the Zech Group, a strategic management holding company with six divisions, among them construction.

In 2005, the company had made its first forays into the infrastructure segment with the construction of small hydroelectric plants. Although traditionally, such projects have been public works bid on by the top tier of mega-construction companies, the latters’ hard times combined with Brazil’s current central-right government’s commitment to privatization signals a period of great opportunity for HTB as it looks toward the future.

Detelf Dralle believes that over the next two years, the economic situation will stabilize, and beginning in 2018, both Brazil’s economy at large and the construction segment will begin to see renewed growth. “There’s going to be a vast wave of privatization of infrastructure, such as ports, airports, energy plants, and so on,” he predicts. “Since we’re already specialists in working on projects for the private sector, this should translate into a lot of great opportunities for us. We truly believe that within the next few years, we’ll be among the top 10 construction companies in Brazil.”

“In truth,” confesses Dralle. “The Brazilian construction industry has always had a negative reputation with many firms not meeting client’s expectations, racking up additional costs, failing to meet deadlines and deliver projects on time. And with all of the recent scandals, this reputation has only grown worse.”

Viewed in this context, HTB really distinguishes itself as the only international construction firm who has been operating continuously in Brazil for 50 years. “The fact that we’re German implies a lot of rigor in terms of our management, but our longevity is a testament to the fact that we’re a partner that clients can trust to get the job done. In Brazil, offering clients a partner they can trust represents enormous added value. Beyond price, both our national and international clients are looking for quality, compliance, and loyalty. These items are key and what we’re known for. They’re in our DNA and they’re why clients keep investing in us.”