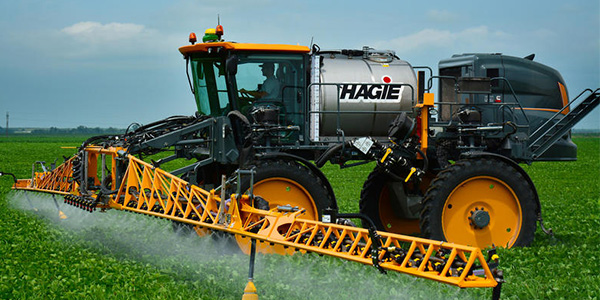 Hagie Manufacturing of Clarion, Iowa, is a leader in the production of self-propelled, high-clearance sprayers and detasselers, and related attachments. Hagie’s line of tractors offers custom applicators, elevator co-ops and crop producers proven performance and excellent return on investment. Hagie sprayers and detasselers come equipped with a four-wheel, independent, air suspension system that provides an exceedingly comfortable ride and stability on uneven terrain. The company’s trademark front-mounted booms improve accuracy and reduce stress. The tanks attached to Hagie sprayers offer anywhere from 500 to 1,200 gallons of total capacity depending on the needs of the customer and deliver in-field convenience, flexibility and efficiency.

Hagie has a history of innovation in the sprayer industry and was first in the introduction of many products and features now standard in the industry. At the time of its founding in 1947 by the Hagie family, the company was first to introduce a high-clearance self-propelled sprayer for sale to the public. In 1960, Hagie transitioned from three-wheel to four-wheel sprayers for safety and capacity reasons, and it also introduced variable speed drive and hydraulic boom controls. The new four-wheel sprayers featured the first ever “walking frame” suspension system that ensured all four pivoting legs were in contact with the ground at all time. “Our competitors have added this safety and stability feature to their tractors, and today, ironically enough, they are touting the technology as the next leading-edge technology,” says Marty Lee, Hagie’s vice president of sales and marketing. In 1997, Hagie became the first company to release a sprayer featuring a four-wheel, automatic, independent air-ride suspension system.

While many of Hagie’s competitors are large firms making an infinite amount of products for the agricultural sector, Hagie is proud of its family-owned heritage and its focus on building only high-clearance tractors for spraying and detasseling. “Our competitors are spread out a little too thin,” says Lee. “In contrast, we’re very focused on a specific goal: to build the best sprayers and detasselers on the market.”

Hagie’s flagship sprayer is the STS 12, which was introduced in 2000. The STS 12 was developed in consultation with many of Hagie’s repeat customers and features a 1,200-gallon stainless steel tank, a 275hp turbo diesel engine, and of course, the company’s patented air-ride suspension system that automatically adjusts to terrain conditions and load variations. The STS 12’s large tank makes it ideal for custom applicators, elevator co-ops and farmers spraying large areas.

The STS 10 sprayer is geared more towards the farmer market due to its smaller 1,000-gallon tank. In both the STS 10 and STS 12 the industry’s first maximum versatility boom system can be configured to 60 feet, 80 feet or 90 feet without having to change components. Hagie’s “UpFront” boom design in both models keeps the operator looking forward — not back — which allows the operator to “adjust for” not “react to” adverse terrain changes. The forward installed boom also helps eliminate operator fatigue and promotes safe operation.

A product that’s sure to exhibit growth in the future is the high-clearance nitrogen applicators for the STS 10 and STS 12 models. Because of the high-clearance capabilities of the STS models, operators can directly inject nitrogen into the soil during the most beneficial time it can be utilized by the growing corn plant. By maximizing their use of the nitrogen, there is less of it to run off into streams, ponds and lakes. As a result, Hagie’s nitrogen injection attachments offer an environmentally friendly approach to nitrogen application.

The 2100 and 284XP are Hagie’s dual tank models. The models carry the solution low and away from the mainframe, balancing the load and increasing stability. The convenience of 800 gallons total on the 284XP and 1,000 gallons total on the 2100, combined with dual tank flexibility, lets the operator treat separate fields or switch treatments within fields without stopping to change loads or refill. The 73-inch underframe clearance means the operator doesn’t have to plow through the crop and risk damage to the crop. The high-clearance also allows the operator to undertake late season and rescue treatments without a problem. The excellent resale value and the comfortable ride of both models have proven popular with smaller co-ops and large-tract farmers.

Hagie’s 204 and 204SP detasselers are specially made for the seed corn producer who wants to maximize profitability, comfort and control while minimizing costs, stress, time in the field and plant damage. The hydraulically driven detasseling head units found in both models offer the ultimate in reliability and can be ordered in configurations from four to 12 rows. Cutter heads by Hagie are virtually maintenance-free with direct-drive cutting blades. Quad pullers are low maintenance, dependable and the best head for a high percentage pull with minimum plant damage.

The 204 comes equipped with Hagie’s exclusive Hydra-Hug® frame. The frame uses hydraulically suspended and interconnected telescoping legs to keep the detasseling heads level from one outside row to the other outside row. The Hydra-Hug® system also provides unequaled steering and riding comfort. The 204SP includes Hagie’s state-of-the-art, air-ride suspension system. With independent, air-ride suspension, the individual legs absorb the shock of sudden terrain changes such as irrigation ditches, keeping the detasseling heads level and avoiding the commonly apparent “scalping” syndrome.

All Hagie sprayers are available with optional seed corn detasseling heads and lifts that offer the highest percentage pull in the industry and the most sought after control unit offered by anyone — the Hagie Tasseltrol™ automatic height control.

Hagie’s primary market is the Corn Belt, the major agricultural region of the U.S. Midwest. “Hagie is beginning to increase our existing presence in the agricultural market on the West Coast and in the Northwest,” notes Lee. “The Hagie name is becoming better known among tree farmers and tomato growers in the West.”

Originally exporting worldwide in 1955, Hagie sprayers and detasselers continue their role in international agriculture. Hagie detasselers have proven popular in Latin America — Brazil and Argentina in particular — as well as Eastern Europe and Western Asia. “We have a presence in the Canadian Wheat Belt, Australian territories, and other destinations like Puerto Rico and even some in Japan” says Lee. “Steak tomato production in Mexico has been a long-time specialty market almost exclusive to our sprayers.”

Hagie has occupied the same Clarion, Iowa, location since the company was founded in 1947. Over the years, Hagie has added to the facility and today the plant offers all levels of modern manufacturing capabilities. Most recently, to commemorate Hagie’s 50th anniversary in 1997, the company unveiled a new research and development wing and a new state-of-the-art painting facility.

The company has been family-owned since 1947 and currently John Hagie, the son of founder Ray Hagie, is president. John Hagie’s son, Alan Hagie, director of business development, is expected to take over in due course.

Hagie’s youthful energy and emphasis on R&D are two important components the company will build on going forward. “Hagie has a lot of young people on staff with a considerable amount of energy,” notes Lee. “Our R&D team is also pushing a lot of boundaries.”

“UpFront” doesn’t only refer to the placement of Hagie’s sprayer booms. “UpFront” also refers to Hagie’s corporate philosophy of being honest and straightforward with employees, co-workers and customers. “Although we want to be the leaders in what we do,” explains Lee, “we’re going to do it in a manner that’s consistent with our values.”