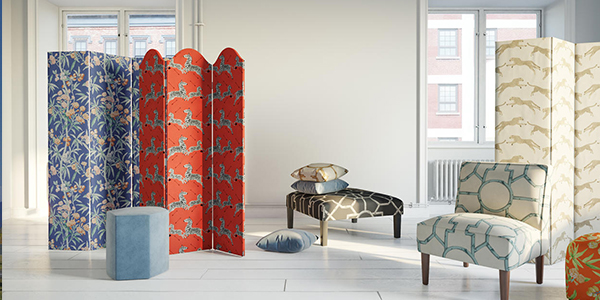 The people at Scalamandré believe in doing things the old-fashioned way. America’s best-known company for high-end wallpaper, fabric, trimming and carpet, has remained in its landmark four-story, redbrick factory in the Long Island City section of Queens, N.Y., under the approach to the 59th Street Bridge – until recently, resisting calls to save money by moving South or overseas.

But then, doing things the old-fashioned way is also why American presidents from Herbert Hoover to George W. Bush have called on Scalamandre to refurnish most of the public rooms in the White House – from exquisite reproductions of 19th-Century French silk to draperies for the Oval Office. And doing things the old-fashioned way is why press baron William Randolph Hearst hired the legendary company to recreate a Renaissance design fabric for his mansion at San Simeon, and why in more recent times Scalamandre has been the firm selected to makeover historic mansions from the famed Breakers in Newport, R.I., to Andrew Jackson’s Hermitage in Nashville. “We love where we are,” said Scalamandre co-president Robert Bitter. However, after a long and difficult family discussion it has finally been decided a move for most of the production facility is necessary. Due to increases in costs of production, Scalamandré will be moving its weaving operation to a modern facility in South Carolina. Archives, a studio and some hand weavers will remain in Long Island City.

75 years of quality
In addition to its high-profile historic renovation projects, Scalamandre has survived into the 21st century by selling its classically styled wallpapers and trim to upscale customers through a network of interior designers, top-quality furniture stores and 24 showrooms and agents around the country. In other words, you won’t find any of the firm’s products – including wallpaper that can run $30 a roll and up and drapery panels that sell for as much as $4,000 – in your local Home Depot or Wal-Mart.

The company’s ability to survive for 75 years through difficult times on quality reproductions and classic designs is a tribute to the legend and reputation of founders Franco Scalamandre and his wife, design artist Flora Baranzelli Scalamandre.

Born in Naples and raised in a small town nearby, famed for its silk and textile weaving, Franco Scalamandre was a decorated and well-known officer in the Italian Army during World War I, but the rise of Fascism prompted him to emigrate to America in 1924, when he was 26 years old. Trained as an engineer, Scalamandre worked for Westinghouse for a time, but supplanted his income by drafting for a design school. He soon became a partner in a decorating company with interior designer Dorthea Seeley, whom he’d met while teaching drafting at her school. In 1929, he met and married artist Flora Baranzelli, and they decided to start their own company that used its own looms to weave silk patterns, in an era when most silk was still imported from Europe.

It was that skill, practiced here in America, that first caught the attention of the White House. The presidential mansion has always featured quality European furnishings since James Monroe bought them in 1817, and that style has remained through a number of major renovation projects. Although Scalamandré has worked with every presidential administration since Hoover, the work that brought the New York company the most fame – and notoriety – was its effort on behalf of First Lady Jacqueline Kennedy in the early 1960s. The Kennedys were the first White House family to make extensive use of television, and so the First Lady’s preference for French furnishings received wide publicity and some controversy because of her Continental style. “It didn’t all work out as well as we would have liked it because the press criticized Kennedy for using a French design firm,” recalled Bitter, although Scalamandré was hired not long ago to recreate some of the Kennedy-era work, such as the French period fabrics that were used to upholster the backs of chairs in the Red Room, as part of a recent $1.78 million refurbishing of the White House.

Scalamandré created draperies and a presidential seal carpet for the Oval Office under Bill Clinton, who liked the company’s work so much he used them to decorate his new private home in Chappaqua, N.Y. Bush removed the Clinton drapes within days of taking office because each President decides what he would like in his personal office, and Bitter said that now Scalamandré is doing some work for the new First Family. The fame within the world of interior design that Scalamandré has acquired has helped make the Queens company the top choice for dozens of high-profile restoration jobs around the country. At Ca’ d’Zan, the 32-room home of John and Mable Ringling in Sarasota, Fla., Scalamandré took the lead role in a six-year, $15 million renovation project. Officials there boasted how Scalamandré could still hand-weave on 19th-century looms, re-creating exactly the fabric used then. An authentic replication of original fabric can be seen on a three-panel, gilded screen, a crimson silk tobacco pattern that is still woven today. The red- and gold-cut void velvet on the throne chairs in the reception room took two years to acquire.

‘Three-ring circus’
Yet Bitter acknowledges that historic preservation work – while garnering most of the headlines – represents only a fraction of Scalamandré’s business. He said the company employs roughly 300 people, including workers at the Long Island City factory and its sales staff. The company’s new agreement with its unionized workers assures that it will stay in its antiquated facility at least for now. “It’s like a three-ring circus,” said Bitter, marveling at how everything from fabric weaving to hand printing of wallpaper takes place on the claustrophobic four floors of factory. But the New York location also has some advantages. Scalamandré often makes contacts with up-and-coming designers through the city’s top-notch design schools, and charity work by the company not only helps the community but also often leads to business contacts. While residential design projects are still Scalamandré’s bread-and-butter, the company is increasingly called upon for upscale hotel work and for corporate offices seeking what Bitter called “a down-home feel.”

The last decade or so has been especially tough on the interior design world, costing Scalamandré a lot of long-time clients, but Bitter said the market “is just now beginning to show some signs of life.” The company does have one manufacturing project outside of the United States – a joint venture in China that has been making more moderately priced trim for the last 15 years.

But Bitter promises that you’ll never find Scalamandré’s product in a discount home-improvement store. “The Scalamandré name needs to be kept special and exclusive and not watered down,” Bitter said. “You can fool around with some other name.”