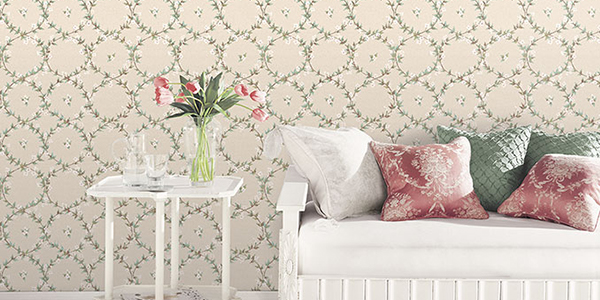 The residential wallcovering market has experienced a significant decline over the past couple of years. Major factors cited include an aging customer demographic and excess capacity.However, Norwall Group, Inc., one of North America’s largest manufacturers and distributors of residential wallpaper and borders, views prevailing conditions as an opportunity. Utilizing product innovation and forward-thinking strategies, the Brampton, Ontario-based company looks to increase its own market share. Essentially, Norwall wants to change the way people look at wallcoverings. This involves not only updating product appearance but changing how wallcoverings are made, sold and bought.

Critical to this is moving the product away from what people traditionally think of as wallpaper. “They tend to think of it as something their grandmothers used,” says Paul Graham, Norwall’s manager of business development. “So we are creating designs that are a lot more contemporary and a lot less country and Americana. Much of our current design has a 1960s retro kind of look.”

Reconcerted Efforts
Norwall’s revamped approach involves gearing the product to the modern home environment. “Instead of addressing ourselves to the traditional detached home with the picket fence, we recognize that half of the people out there live in condos, lofts and apartments,” explains Graham. “These new homes have a more open plan and require a different look and color palate. So, innovation in design is a key to growing the company.”
Norwall also has moved toward faux-textured products. This comes in response to stiff competition from the paint business, which is benefiting from the increased popularity of faux paint finishes. Graham indicates that faux-textured wallcoverings can achieve the same effect but with a lot less work. “Also, it provides a more durable surface when the job is completed,” he adds.

In going after a bigger market share, Norwall also has focused efforts on targeting even more wallcovering retailers. In recent years, one of Norwall’s main strategies has been to build its position with mass merchants. Currently, few exist that the company doesn’t already service. It supplies major merchants such as Wal-Mart, Home Depot, Lowe’s, and Sherwin-Williams. But new targets do exist. Recently, it became the principal supplier of wallcoverings to K-Mart.

Versatile Product Flavoring
Norwall produces solid vinyl wallcoverings sold either directly to retailers or through distributors in North America and overseas. Besides mass merchants, customers include home centers and specialty stores. Its subsidiary, Patton Wallcoverings Inc., is the distributor of products throughout the United States.

Typically, Norwall buys its designs from independent designers and then colors the designs in its own studio. It organizes specific designs and colors by theme and fashion to form annual collections targeted to specific customer groups, tastes, and price ranges. In 2005, the top selling products include faux textures. Recently, Norwall has gone after younger consumers by developing products with a more contemporary design, imbuing its wallcoverings with subtle blends and color combinations integrated with design images. This is in stark opposition to the flat-color approach typical of most other wallpaper offerings.

“The contemporary flavor of our new designs is what we’re most proud of and excited about,” remarks Graham. The flavor is suggested by the names of some of the current collections: In the Groove, Boardwalk, Chateau, and Marketplace.

Making its product even more attractive to new consumers, Norwall manufactures its wallcoverings to be scrubbable, printing the designs directly onto a solid vinyl surface. A heat-embossing process improves texture and color retention and ensures the preferable “scrubbability.” Scrubbable wallcoverings may be used in any area of the home, but are essential for areas such as kitchens, bathrooms, laundry rooms and children’s bedrooms. They’re also desirable in high-traffic areas such as foyers and hallways.

Some wallcoverings are also paintable, a quality made possible by covering part of a paper surface with an expandable ink and then passing it through a temperature controlled heat tunnel. This causes the ink to rise while the paper remains stable and creates a deep high-contrast texture. Also, products are pre-pasted, which is more convenient for the “do it yourself” decorators who don’t have to paste the product to the wall. In addition, the wall coverings are “peelable” for easy removal when it comes time to redecorate.

In 2004, Norwall manufactured approximately 42 million meters of wallcoverings. As part of the manufacturing process, the company purchases raw paper in 42-inch-wide rolls. The paper is sent to the coating mill where vinyl and paste is applied in preparation for the production of vinyl wallcoverings.

“One of the things that sets us apart is that most of our competitors buy the paper or vinyl that they print upon, where we produce it in house,” Graham points out. “Besides the obvious cost advantages to this, it enables us to control product quality by managing that aspect of the raw material production.”

The designs are printed with diamond-etched chrome-plated cylinders. Each cylinder imprints a portion of the design and a particular color on the paper. The number of cylinders required for a specific design varies depending on the number of colors involved, pattern intricacy, and whether the paper is embossed. Norwall’s library includes approximately 12,000 cylinders for different wallcovering designs. These cylinders can be used to print new collections of product by using existing designs in different colors.
Norwall also has facilities where it conducts test runs of new wallcoverings. This allows the company to show new designs and colors to customers to determine reaction before committing to mass production runs.

Further, Norwall has two warehouse locations from where it ships products to customers. Approximately 70,000 square feet of the Brampton facility is occupied by a finished-goods warehouse. In addition, Norwall rents 151,000 square feet in Columbus, Ohio, from which goods are shipped to mass merchandisers and distributors in the United States.

30-year Development
Originally founded in 1975, the company was incorporated as the Norwall Group Inc. in 1990 and subsequently became a vertical, integrated manufacturer/distributor. A major acquisition occurred in 1994, when Norwall bought Patton Wallcoverings Inc. (PWI) of Columbus Ohio, a major American distributor with more than 6,000 customers. Under the leadership of James Patton, PWI grew from a small, local outlet into a national U.S. distributor. Patton became Norwall’s president and CEO in 1995.

The acquisition initiated a major expansion in Norwall’s marketing strategy of selling its products through traditional wallcovering distribution channels. Previously, Norwall focused its sales on general merchandise mass merchandisers. Patton’s customers were concentrated in the independent retail segment, which constitutes the largest share of the wallcoverings market. The purchase increased Norwall’s customer base and expanded its penetration into the U.S. market. In order to sell to this expanded market, Norwall began creating wallcovering designs marketed both as collections and as in-stock wallpaper programs.

In 2003, Norwall expanded into the mass merchant market and experienced a 20-percent increase in sales. Seventy-percent of this increase resulted from sales to a new customer, Wal-Mart Inc. Norwall typically provides mass-merchant customers with a full line of customized services, as it selects products to sell and provides in-store marketing and fixturing, and point-of-sale merchandising.

Norwall’s reach now extends into international markets. “We have about a 15 or 16 percent market share across North America, and we export to countries overseas. North America is the largest exporter of wallpaper to the European market, and we’ve gradually made inroads into South America, Asia and the Pacific Rim.”

New Strategies
Because of its proactive approach, Norwall enjoys good health despite existing in what many would feel is a depressed environment. The company secured its strong position by proactively pursuing the mass merchant business and by developing its U.S. distribution network. Now it feels well positioned to take advantage of future opportunities. Still, the company has developed additional strategies to ensure this advantage. Along with its other initiatives, Norwall plans to continue focusing on packaging. “We’ve always tried to be innovative in that area,” says Graham, “because we are very much directed to the mass merchant business. One of the challenges is to produce packaging that will allow the product to sell in the self-serve environment.”

In addition, Norwall is looking toward new technologies, digital printing, in particular. “If you’re a major industry player, you’re looking to the increased use of digital printing,” says Graham. “This will allow us to introduce new products on a much shorter time frame. Digital printing involves considerably shorter production runs than conventional analog printing using rollers or cylinders.”