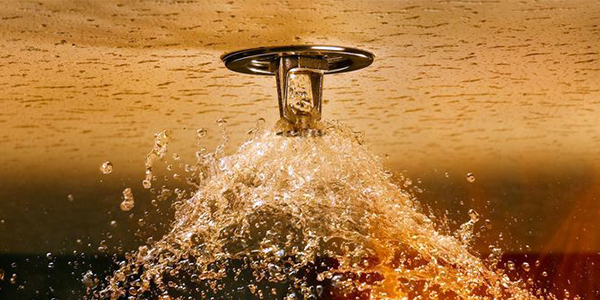 The story at Central Sprinkler Company is not that it manufactures thousands of varieties of sprinkler systems, although that certainly is a key facet of how the business has kept the numerous residences and businesses to which it sells safe and dry.

The latest attention-getter at the 80-year-old company, headquartered in Lansdale, Pa., is a new family of warehouse storage sprinklers. “They’re probably the best on the market,” says Director of Marketing Jim Brunetti. “They’re for use in extremely high-challenged fire scenarios.” By “high-challenged,” Brunetti means storage facilities that house highly sensitive chemicals. To keep these areas dry and safe, Central Sprinkler has begun to market the “largest fire sprinkler ever developed,” Brunetti explains, consisting of a 1-inch-diameter orifice. Named the K-25 (K relates to the orifice opening), the sprinkler is made more effective in case fire breaks out.

“In this scenario, half-inch sprinklers are standard,” Brunetti says. “We developed this technology based on the inability of traditional sprinklers to perform. Basically, the droplets coming out of the nozzles have been either too small or they mist up, and you end up with a cloud.” Both have proven ineffective in dousing fires, he says.

Another claim to fame for the sprinkler company, founded in 1920, is the special nozzle developed for use in combustible sealed spaces. “Per National Fire Protection Association standards, sprinklers are required in between floors,” Brunetti says. “We noticed that when we went to put in plastic piping product we found that by attempting to protect the pipe in concealed areas with a standard sprinkler, it didn’t perform.” The water, he explains, shot out in an umbrella pattern that did nothing to quench the concealed space blaze. “You ended up with dry areas,” he says. Central Sprinkler’s Combustible Concealed™ nozzle pattern is unique, containing a small orifice measuring three-eighths of an inch, that shoots out water in a high, flat pattern. “The special nozzle is 100 percent effective in areas of 6 inches or less,” says Brunetti.

Central Sprinkler company manufacturers sprinklers for any type of building, from single-family dwellings to multilevel office and commercial buildings. “Our entire fire protection business was stagnant until the 1980s, when there was a complete revolution in the development of fire sprinkler products,” he remembers.

Right now, the company sells to distributors and licensed contractors throughout the world – a $230 million annual business – with daughter companies in Singapore, Bejing and Shanghai. “We’re now in the process of unveiling five product lines for residential to high-challenged storage areas,” Brunetti says.

Among the many products manufactured by Central Sprinkler are standard spray, extended coverage, storage and special hazard, residential, dry and special sprinklers, plus accessories such as fittings, couplings and pipes, valves and air maintenance devices. Manufacturing sites include Lansdale, Gainsborough and Lincolnshire, Pa.; Anniston, Ala., where groove piping is made; and Madison, Ala., where plastic piping is made. The company maintains a distribution warehouse in King of Prussia, Pa.

At Central Sprinkler the motto is to never rest on your laurels. With that in mind, employees are always searching for new applications for their sprinkler systems. Recently, Central Sprinkler has increased the application uses for extended coverage sprinklers, the Dry ELO-16 and the ESLO. Both achieve quick-response listings for coverage areas of up to 20 square feet.

Expanded applications were also found for the glass bulb, half-inch extended coverage sprinklers – the UL and ULC GB EL family – primarily for the light hazard and commercial markets. These sprinklers are available in pendent, recessed pendent and sidewall, enabling maximum flexibility for installing sidewall sprinklers at the ceiling where an obstruction can be a factor.

There are also expanded listings and applications for the model LF residential sidewall sprinkler, now listed for increased throws of up to 16 square feet as well as 16 feet by 18 feet. The deflector distance from ceiling now extends up to 12 inches below the ceiling for all spacings to avoid obstructions.

Revisiting already successful products to find new uses, while consistently challenging themselves to push the envelope on technology, has enabled Central Sprinkler employees to keep ahead of their competition in providing the safest sprinkler systems on the market. This philosophy is born out in the company’s mission statement: “Central Sprinkler has always recognized that quality and attention to detail are necessary ingredients to provide the industry with the most innovative and state-of-the-art products that are available. Central Sprinkler is an ISO 9001-certified manufac-turer that believes quality comes first.”